"Joe the Plumber" is just the most recent example of a working-class guy who's been brainwashed by the right to see a hammer and sickle whenever liberals talk about taxes. 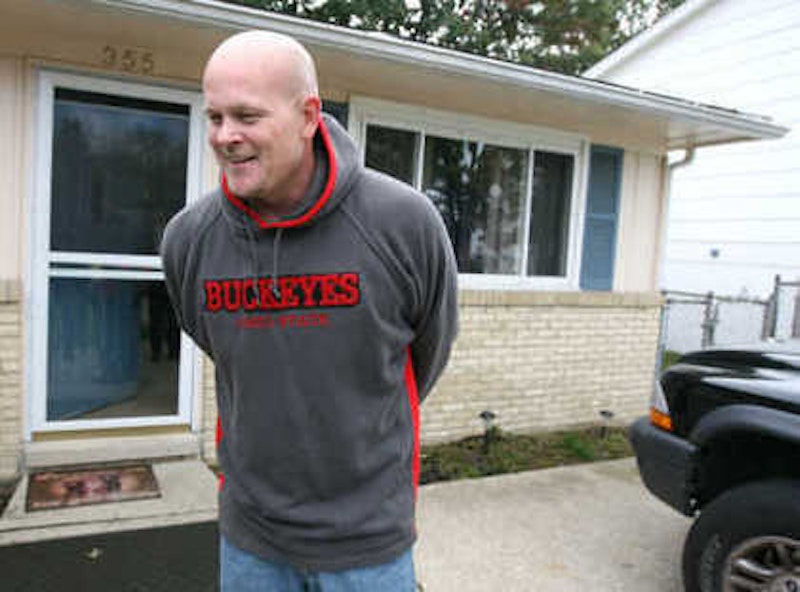 The saga of Samuel “Joe the Plumber” Wurzelbacher has become a terrific metaphor for the far-right-wing political strategy: brainwash the working class into opposing a policy that will actually help them.

I agree with John McCain when he states that Wurzelbacher is a victim in this whole escapade; however, his victimization is a result of the above-referenced brainwashing.  Let’s not forget how far-right conservatives brainwashed many people into thinking that Iraq was connected to 9/11. That charge has always been refuted, but as usual, the media didn’t do its job in helping Americans understand the truth. By the time the media really mounted its assault on this lie, it was too late—the damage had been done. The war in Iraq has been a massive detriment to lower income individuals but an economic boon for many of our country’s wealthiest individuals and corporations. And now, the far-right conservatives are brainwashing working-class people into believing that Barack Obama is going to raise their taxes.

The now infamous encounter between Joe the Plumber and Obama went something like this: Wurzelbacher told Obama that he had been a plumber for 15 years and was getting ready to buy a company that would make about $280,000.00 a year. Under Obama’s tax plan, his business would be taxed higher. If Obama was as snide and sarcastic as me, he could have responded by saying, “Yeah, and your point is…?” Joe the Plumber and advocates of his sentiment seem to believe that this plan tramples on the American Dream. Of course! I mean, we all can imagine the type of deterrent effect that this will have on business growth:

“So, aren’t you going to try to grow your small business?”

“Are you kidding! If I make more money, then I’ll have to pay more taxes. No thank you, sir!”

“But, won’t you still make more money than you do now even after taxes are deducted?”

“That’s besides the point. I can’t stand the thought that the money I make might be helping the government or somebody in a lower economic position than me. Who do you think I am? Jesus Christ?”

Now, there has been a lot of unnecessary character assassination of Wurzelbacher. For example, the revelation that he’s not a licensed plumber, or the claim that he’s nowhere near financially fit to purchase the company he talked about. The truth is that you would be amazed at how many people in this country are not properly licensed for their trade. Joe has been plumbing for 15 years: he’s a fucking plumber. I’m not advocating improper licensing, but hell, in some courts failing to properly license might not even hurt your case. Unfortunately, claims like these have allowed the McCain campaign to make a frowny face and say that the liberal elite media is being mean to Joe the Plumber. I guess McCain is in no way culpable despite mentioning “Joe the Plumber” 15-some times in a nationally televised presidential debate. Regardless, this ends up overshadowing the fact that there are a couple of problems with the assertions Joe made to Sen. Obama.

First of all, Joe appears to have mistaken company income with company value. While he might be correct that the company he hoped to purchase was worth $280,000, the actual income that the company pulls in annually is under $250,000. Consequently, this company would not see a tax increase under Obama’s plan. Joe the Plumber even admitted this fact recently to a reporter.

However, there is minimal utility in discounting Joe’s claims simply because of factual discrepancies. Let’s say hypothetically that Joe really was planning on purchasing a company that made $280,000. The Tax Foundation did an analysis revealing that, in such a scenario, Joe the Financially Sound Company Owner would pay $773 more in taxes under the Obama plan than under the McCain plan. I got out my abacus and chart of logarithms to do the math: it’s a move from $280,000 to $279,227. Gosh, how will he feed his family, pay his bills and fuel his jetski?

But Obama did a terrible, terrible thing in his response to Wurzelbacher: he uttered the phrase “spread the wealth around.” Sacre bleu! Joe later admitted in an interview with Fox News Radio that it sounded like socialism to him. I agree with him, but to me it sounds like Democratic Socialism. We could argue about whether that’s what Obama wants to do and whether it would be a bad thing, but I just want to show that this is another example of brainwashing. The Rush Limbaughs of the world hear that off-the-cuff phrase, and to them it sounds like “WORKING MEN OF THE WORLD UNITE!”  Barack Obama = Stalin. Case closed. But this is like looking into the Louvre through a peephole, and saying, “Yup, I get it now.” Never mind that historically Marxist regimes have consistently been ignorant distortions of what Karl Marx actually preached.

So that’s the latest brainwashing scheme by the far right: they’ve dusted off the ol’ “Red Scare.” But I think that their tactic is going to fall on deaf ears this time around. When the average American is struggling to take care of his or her family while AIG executives are drinking milk from a golden titty, a generic phrase like “spread the wealth around” actually sounds pretty enticing. But honestly, do you believe that Obama could get away with (or even attempt to) establish America as a communist nation? If you do, I’m sorry to tell you this, but you’ve been brainwashed.

I recently saw a commentator on TV who summed up the point I’ve been trying to make here very nicely:

The man who said that was Joe the Plumber. I could not agree with him more, and I wish he had given this advice to Joe the… Oops.