The Satire That Wasn't

The New Yorker's cover wasn't as offensive as the self-righteous and condescending tirades that followed in the liberal media. 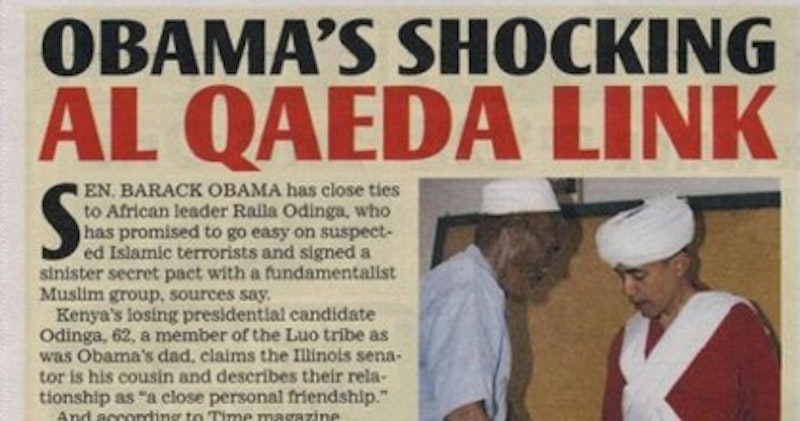 Isn't this the kind of thing they were mocking? From the February 4th Examiner.

We're blitzkrieging water coolers, laughing at friends/family members/coworkers who frantically emailed us this morning with "Whoa, this New Yorker cover is going to blow your MIND" and generally parsing the aftermath and ramifications of said cover, wondering if it's really going to facilitate a drop in the polls for Sen. Barack Obama or cause the anti-Christ him-/herself to move out of hibernation early.

"Tasteless" is the phrase of choice from all camps; the image of the Obamas—he in kaftan and headscarf, she with an Angela Davis 'fro and an AK-47, the two fist-bumping while the American flag burns in the Oval Office—perpetuated a stereotype (a lot of them, actually), the critics say. Period. The cover lands smack in the middle of the summer ennui of a highly charged general election. And although all presidential election seasons are high-tempo, high-strung and highly dramatic, look at how fast top ranking officials in both campaigns—not flightless interns or mercenary surrogates, but top economic advisers and VP vetters—have been jettisoned at the snap of a finger. Look at how quickly both camps have taken umbrage at the slightest chance, puffing out chests till the face is obscured behind a hot-air filled press release choking on its own self-seriousness.

Both parties, Obama followed by McCain, have put together response teams to deal with vicious rumors. The New Yorker cover bluntly throws every Obama misconception it can find into the mix: terrorist, Muslim, America hater, wife as radical Black Panther, etc. It does the work for "them," the critics holler. "Them" being those that...are not smart enough to read the New Yorker? Fringe right-wing nutjobs with the sole purpose of spreading misinformation? The swing voters? What exactly do the critics envision happening?

Exhibit B: "See! Even The New Yorker, the most virulent left-wing rag since The New York Times, says it's TRUE!"

Exhibit C: "Well, I'm a discerning individual, sorta well read, and, well, I just wasn't sure what to make of this magazine I saw on a rack at the store. I mean, I don't think Obama is a terrorist, but, you know, they wouldn't put it on a magazine cover if it weren't true, right? I guess he is. I'm voting for Nader."

The masses. A good deal of the criticism is bald condescension toward the masses—the unwashed, the teeming, those who do not read The New Yorker OR Portfolio. We—The New Yorker, the liberal media, the liberal blogosphere—we must protect our house. Instead of quietly turning up our noses to those not on the inside, we loudly claim that there are untold amounts of people so dumb they won't get the satire—and one of our lieutenants is subverting the cause.

Calling on the press to protect the common man from the potential corruptions of satire is a strange, paternalistic assignment for any     journalist to give his peers, but that appears to be what The New Yorker's detractors desire. I don't know whether to be crushed by that realization or elated by the notion that one of the most elite journals in the land has faith that Joe Sixpack can figure out a damned picture for himself.

And, for me, therein lies the rub. Apparently The New Yorker crossed the line when it assumed everyone would "get the effin' joke." They went ahead and crystallized all the bad shit Democrats fear the rest of the country is saying—and let’s not forget that around 15 percent of the county does in fact still think Obama is a Muslim. So everyone freaked. Everyone was offended, appalled. Over a cartoon. A set of caricatures. Granted, not quite the same as the infamous Danish cartoons, but look at us froth. Look at us go.