Pundits and experts continue to explore ways to save the traditional communications industry, but no one’s listening. 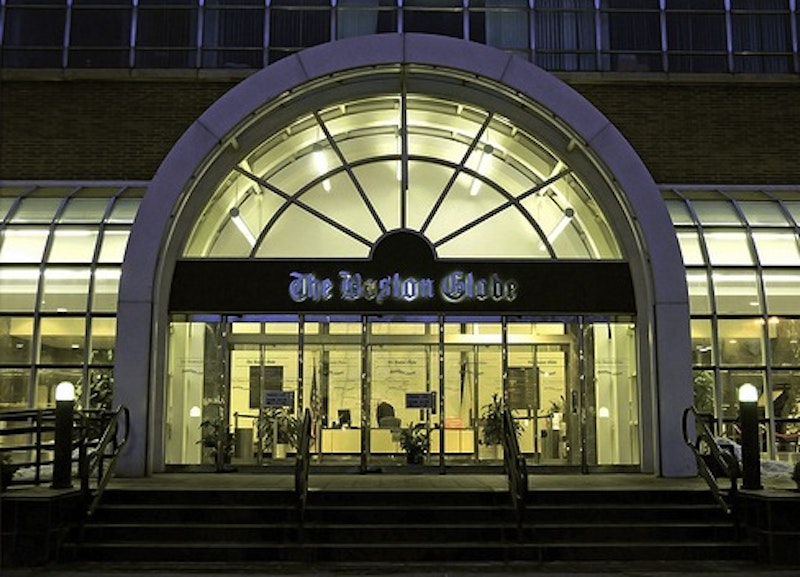 Photo by Tony the Misfit.

Twenty-five years ago, during a holiday soiree at the home of longtime Baltimore Sun editorial writer and book reviewer James H. Bready, a friend of mine—like his Sun colleague Bready, now retired—balanced a goblet of white wine and plate of cheese and cold cuts, roared with laughter, pointed at his loud tie, and said, “The only bad thing about Christmastime is that there are so many parties packed into a 15-day span that it’s embarrassing to run into you and realize I’m wearing the same suit of clothes!” At the time, Mike was a hard-working education reporter, a classic “newspaperman” who, like the rest of us, couldn’t imagine the day when his lifelong profession would cease to exist. Two years later, when Times-Mirror Co. bought the Sun from the company’s local owners—not coincidentally the day after the local Hearst daily, The News-American published its last edition—it’s possible that extraordinarily prescient observers might’ve glimpsed the future, but I certainly wasn’t acquainted with any such person, who, in any case probably would’ve been dismissed as a gloom and doom flake.

Today, although the gatherings of media people are usually online, I have a similar feeling, but it’s certainly not as jolly: how many funerals for the print industry can one take part in before the corpse has cried out, “Enough!”? Everyone but a few scattered utopians knows the jig is up, yet the frenzied debates about newspapers and magazines charging for web content, the meditations of media companies going the non-profit route, and angry attacks on “aggregators” who lift original material from the crumbling institutions that once reveled not only in huge profits but journalistic glory, won’t let up. At some point, perhaps later this year, there will be the collective consensus that “when it’s dead, it’s dead,” but right now last-ditch schemes combined with eulogies for a bygone era proliferate like 10-part newspaper investigations geared for Pulitzer Prizes once did.

Barely acknowledged is the plain fact that the vast majority of Americans under the age of 40 are either oblivious to the mourning or, more harshly, openly contemptuous of the hand-wringing.

I was once again reminded of this tortured bereavement last week upon reading Eric Alterman’s latest column in The Nation—via Jim Romenesko, naturally, since my physical copy of the weekly hadn’t yet arrived in the mail—when he concluded that Maryland Sen. Ben Cardin’s proposed “Newspaper Revitalization Act,” a benign but fruitless plan in which newspaper companies could choose to become tax-exempt organizations, so long as they refrained from issuing political endorsements, “may be our last, best chance.” (I’m giving Cardin the benefit of the doubt on this one, although his April 3 Washington Post op-ed did smack of some grandstanding. For example, he wrote, “Like Jefferson, I believe that a well-informed public is the core of our democracy.”)

Alterman’s left-wing political views aren’t to my liking, but as one who’s of the same generation, I’ve no beef with his nostalgia for the days when you’d go to work, briefcase bulging with newsprint. In the late 1980s, for example, when I walked to the office of my weekly newspaper New York Press, Wednesdays were a particular bonanza at the newsstands, as I’d purchase copies of all the dailies, plus the Village Voice, The New York Observer and 7 Days.

Nevertheless, Alterman, like most of this funeral’s orators, is speaking to the graybeards among us. In fact, aside from an excellent anecdote of listening to Ben Bradlee, 20 years ago, pre-Internet explosion, “bemoan” the fact that young people weren’t buying The Washington Post, most of Alterman’s column borders on the sanctimonious. An example: “To believe in the notion that, in the midst of the cost-cutting mania that is sweeping the business, we are likely to stumble onto a new source of profit sufficient to sustain the size of the news gathering and dissemination we’ve enjoyed in the past is akin to placing one’s faith in divine intervention.” [Emphasis mine.]

What Alterman, like so many of his peers engaged in this wailing, fails to understand is that there is no “we” in the discussion. “We,” meaning about 99 percent of Americans, have either moved on and embraced the digital revolution or never really cared about the media’s travails (or former self-congratulatory toasts) in the first place.

An Atlantic/National Journal poll released on April 10—a query of 43 “media elites”—showed that 65 percent of the respondents believe the Internet has hurt journalism. One of the anonymous comments published read, “The Internet trains readers to consume news in ever-smaller bites. This is a disaster for newspapers and magazines.”

The Atlantic’s exercise was laughably repetitive, especially since most of “insiders” contacted are the equivalent of aging baseball players sniffing around for their last contract. Not to be mean-spirited, but what sort of answers about the changing industry do you expect from the likes of the following: Sam Donaldson, Mark Halperin, Nina Totenberg, David Brooks, Chris Matthews, Eugene Robinson, Doyle McManus, Todd Purdum, James Fallows, Cokie Roberts, Jane Mayer, Carl Cannon, Howard Fineman, Mort Kondracke and Roger Cohen? These men and women represent the Old Guard of the media, so the results are predictable. A smaller number of online entrepreneurs and bloggers—such as Josh Marshall and Markos Moulitsas—were included, and presumably provided the “thumbs up” to the Internet’s influence, but on the whole, the story was one more tired lament.

Mark Bowden’s long and critical Vanity Fair profile of embattled New York Times publisher Arthur Sulzberger Jr., released last month, caused another froth-at-the-mouth session, with Times executive editor Bill Keller (who, before the digital siege began, had an uneasy relationship with his boss) telling The New York Observer, “I’ll bet on Arthur Sulzberger finding the answer to that question [how traditional media corporations will survive] before Mark Bowden does.” One would hope so, since Bowden, a superb investigative journalist and author who’s almost 60 himself, is not the publisher or part-owner of the country’s most regaled daily.

But back to Eric Alterman. Bowden’s one-two punch to Sulzberger’s job performance inspired the writer to post a piece on the April 2 Daily Beast, headlined “Stop Picking on Pinch,” which implausibly concluded, “At least [Sulzberger’s] taking the ship down with dignity.” Two days later, of course, The Times Co. threatened to shut down The Boston Globe, the albatross acquired in 1993 for $1.1 billion, unless unions conceded to deep pay cuts and reduction of benefits. It’s unlikely that many Globe employees agree that “dignity” is a word to be associated with Sulzberger and his management team. One Globe classified saleswoman, Kathy Connolly, was quoted in her own paper on April 9 as saying, “Right now, I’m very angry at the disrespect and disregard for the people who have given so much to this paper. We have to fight.”

But this particular fight is over, no matter how much and how often veterans of the media protest and try to figure out any means of survival for the profession as they knew it. The turmoil and recriminations will eventually fade away, and when the zigs and zags of the New Media are less chaotic, when people whose names are currently unknown replace the tumbling titans, order will be restored and Ben Cardin, along with Thomas Jefferson, will no longer fear for the “core of democracy.”