From Biden and Cuomo to Woody Allen and Derrida, the left has issues. 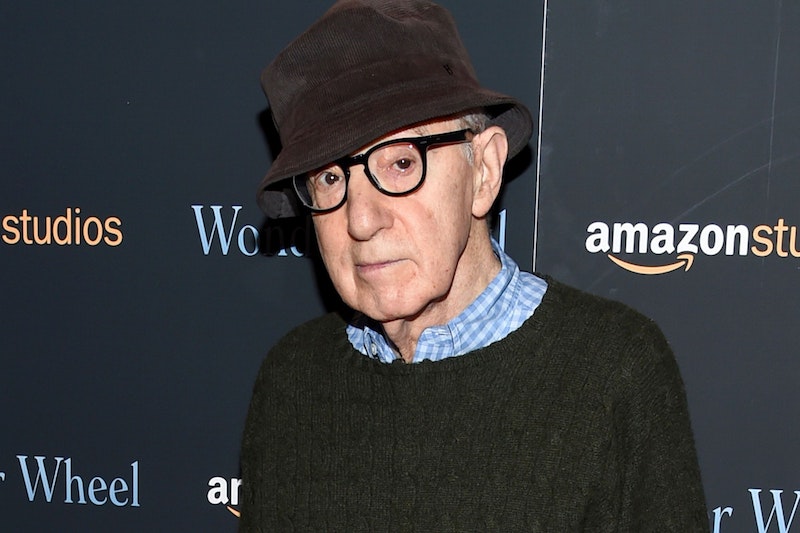 It’s springtime for a northern hemisphere tired of lockdown—but autumn for an array of creepy old men the left loves, or used to love.

Biden’s dementia and physical infirmity become more obvious with each passing day, and as John Carney has observed, left/liberals were right in the middle of a familiar, perfunctory wave of “Biden provides little fodder for comedians” propaganda when Biden repeatedly fell on the steps of Air Force One, the sort of thing that was grist for a season or more of jokes about (relatively athletic) President Ford on Saturday Night Live in the 1970s.

I’m sure all those politically obedient comedy writers on the late-night talk show staffs are busy telling themselves there’s nothing funny to be said about Biden’s groping and hair-sniffing, too. Maybe next they’ll launch clumsy attacks on Putin in an attempt to boost Biden’s signal on that issue and end up doing more to increase the Russian autocrat’s popularity than Trump ever did. And needless to say, there’s no solid evidence that there’s anything funny about Biden’s son’s laptop.

Left/liberals tend to celebrate youth, but their evil has long been a multi-generational affair, characterized by powerful dynasties, from whom little is asked and much is tolerated. I notice New York’s Gov. Andrew Cuomo, so prolific in his creepiness that he should soon be able to compose a Top 40 list of his favorite sexual harassment accusers, has two Brown University alum daughters, one an ardent anti-harassment activist.

I used to joke at Brown that Harvard and Yale taught tomorrow’s Democratic leaders while we only got the children of yesterday’s Democratic leaders (children of Dukakis, Carter, the Kennedys, now Cuomo…). Don’t expect the sanctimonious kids from those families ever to break with their badly-behaved rich elders no matter how rich the irony becomes. Meanwhile, a SUNY chancellor has been accused of helping Cuomo lie about the large number of needless COVID deaths in New York, so even lesser colleges know their main function in society is to circle the wagons around a corrupt Democratic Party elite, always.

There’s now some debate over whether Cuomo should be remembered as a sexual harasser, as the left argues, or as a mass murderer, as right-wingers critical of his COVID policies argue. But why not both?

I’m pleased to see a philosopher like Harvard’s Michael Sandel looking at the rich kids and pampered professors around him and concluding we should start questioning the very concept of “meritocracy,” but is it fair to blame merit itself for the elite being such an undeserving bunch of louts? This strikes me as a new iteration of the old left/liberal impulse to throw out concepts like morality altogether if too many bad people succeed in life. Losing our love of standards could make things worse, as when schools stop testing or all businesses get the same amount of money doled out to them under some egalitarian plan regardless of customer satisfaction.

There’s merit in this society. It just isn’t effectively filtered for by the systems of voting and credentialing that create the major political parties and academic institutions. Maybe those institutions should be the next thing weeded out, along with the creepy old dynasties attached to them.

But that change needn’t yield a rudderless world. I’m old enough now to dispense advice to the young, if that helps. I’m aghast at the thought that somewhere out there is probably a Gen Z person who thinks of Hall and Oates and Fugazi as interchangeable “80s music,” and that’s the early 21st-century equivalent of having a long gray beard. I don’t plan to waste my newly acquired status as an aged sage just griping about recent young adult trends such as metrosexuals, manscaping, or manorexia, either.

I want, rather, to tell the young those truths that’ll prevent them being duped by the sorts of bogus would-be moral and intellectual authorities listed above—and I’ll try to do it with slightly more nuance than my grandfather displayed when he ranted about politicians of both parties that “They’re all crooks” and more nuance than Mom nowadays shows when she dismisses my surveillance-state worries by saying things like, “Ah, let them come shoot me, I don’t care.” But Grandpa and Mom are obviously very, very close to the truth (as is the 85-year-old judge described here who has had enough).

My central piece of advice, paradoxical as it may seem, would be that if you don’t build up and worship purported “authorities” so much in the first place, you might not need to make so much noise about tearing them down later. Take former liberal/environmentalist darling Dr. Seuss. Or Woody Allen, for example.

For decades, most Americans, like me, probably thought of Allen as funny but obviously weird and neurotic, so him being accused by Mia Farrow of being a pervert wasn’t really that surprising. By contrast, it was the left/liberal elite who thought of him as a highbrow, emotionally insightful artiste, so the question of whether or not he’s a child molester causes them unending paroxysms of self-doubt. That makes those elitists ripe for exploitation themselves, not by molesters in the usual sense but by people like the documentarians behind the miniseries Allen v. Farrow, Kirby Dick and Amy Ziering. Allen might be a molester, but you won’t find proof of it in something as biased, as emotional-strings-pulling, and (at precisely the times when it really should count) as evasive as this recent HBO Max documentary series.

Just as populist-leaning Americans wouldn’t have invested overly high hopes in neurotic weirdo Allen in the first place, most Americans wouldn’t need point-by-point refutations or criticisms of the documentary if you told them that the pair who made it are products of Amherst and Yale who, in between their multiple documentaries about hidden rape cultures and patriarchal crimes everywhere, did a highly sympathetic documentary about far-left French literary theorist Jacques Derrida, who taught one half of the documentary team, Amy Ziering, at Yale and who notoriously believed that objectivity is impossible and there is only continual playing with “the text” etc. etc.

Allen once said—rather plausibly, though obviously I don’t know the ultimate truth about the allegations against him—that he would’ve fought back even more vigorously against Farrow’s allegation that he molested her young daughter Dylan in 1992 had he not feared on some level that he “deserved” the allegations, not because they were true but because he’d been so reckless in an analogous way, starting an affair with another Farrow daughter, young-but-legal Soon-Yi Previn. This still strikes me as more plausible than Allen sneaking into an easily-accessible room in a big and populous house, just once in all those decades so far as we have ever heard, and molesting Dylan during a narrow 20-minute window when they weren’t surrounded by other family members.

But a conventional documentary might help clear this up by grilling Allen and grilling Dylan, or at least by giving us the details, however horrific, of what Dylan told mom Farrow and when. Despite four hours of angst and sad piano music, the documentary never does these basic things. Allen didn’t participate, Farrow merely asserts that she feared for her children and wishes she never met Allen, and Dylan largely just talks about her subsequent emotional trauma and how painful it is not to be believed. And I have no wish to add to that pain, but that shouldn’t be an excuse for Derrida-admiring documentarians to give us an allusive fogbank of emotions, media reactions, and psychological theories instead of telling us what happened and how we know it really happened.

But again, if you never trusted Allen to be more than a funnyman and never trusted Derrida to be more than the kind of truth-flouting French bullshitter who inspires airhead Ivy Leaguers (not to mention pretentious Continent-adoring filmmakers of the late-20th century) to push anti-capitalist and anti-patriarchal narratives, we wouldn’t be in the position of trying to squeeze truth out of these dry old bones. We could be talking about, you know, facts.

Nonetheless, I notice a liberal media-industry acquaintance of mine announcing on Facebook that the Allen documentary tears it: All her and her husband’s Woody Allen books and movies are going into the trash—along with all Dr. Seuss material—to protect children in her household. When I tried cautiously to suggest this might be hasty, an acolyte of gay ex-prostitute horror author Clive Barker, famous for depicting bdsm-inspired demons in the Hellraiser film series and for writing children’s books, weighed in to inform me that keeping Allen and Seuss in the house would be like expecting the household to tolerate swastikas hanging on its walls.

So, liberals start out looking for wise elders to teach them and end up concluding, at least until the next fad or moral panic, that the Lorax is more damaging than the flesh-rending depredations of the extra-dimensional Cenobites, I guess. Like someone who keeps being traumatized by assaults in various scummy bars but merely responds by trying new and more out-of-the-way scummy bars, left/liberals may be on a hopeless quest to find members of their own tribe they can truly trust, instead of avoiding entanglement with all of those people and adopting a whole new way of life with fundamentally different philosophical premises.