How long can the media pretend Joe Biden is in any way “active” in his administration? 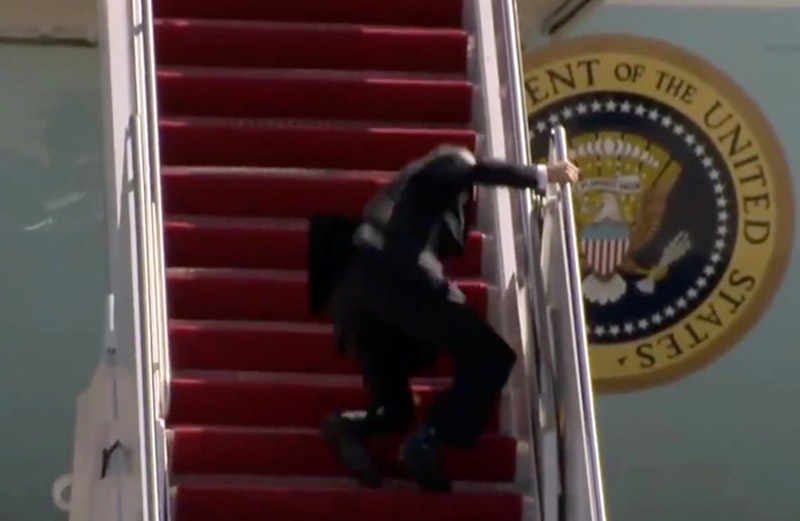 Airplane stairs have had it too good for too long. They have a brand name: Airstair. Understandable, but they’re responsible for far too many gaffes to continue operating without an immediate interruption in services. Famous people fall on Airstairs all the time, and others do as well, but that’s not important. Journalists aren’t taking photos of travelers unless it’s a holiday or there’s been a terrorist attack. “If you see something, say something”—yes, I see that there are many places an American can’t travel to anymore, like Paris. If you’re in California or the Tri-State Area, yes, but not if you live in Cincinnati. That was not the case pre-coronavirus.

No one needs a refresher on Joe Biden’s difficulty on the Airstair last week, whereas even I missed his “deepfake” controversy completely. Even if I saw something someone claimed was a “deepfake,” I wouldn’t notice. I watch too many movies. I live in deepfakes. But I saw the President’s failure to negotiate civil terms with the stairs on the tarmac. Whenever I’ve been on Air Force One (never, but I’m assuming), I’ve kept my balance, but I’m also 50 years younger than Biden, and once you get to 78 (once again, I’m assuming), accidents are bound to happen. As Elvis Costello sang, “They only hit and run.”

John Kerry going maskless—or “bareface,” as Matt Drudge likes to put it—on a commercial flight confuses me. The New York Post was nasty: “Photos show presidential ‘climate envoy’ John Kerry going maskless in a first-class plane seat on an American Airlines DC-Boston flight Wednesday. The passenger in the next seat thinks it was while Kerry was making several work calls before takeoff. We must’ve missed that exception in President Joe Biden’s week-one executive order requiring masks for interstate travel and letting TSA agents bump maskless travelers. But this is John ‘Do you know who I am?’ Kerry, so we guess he’s above the rules.”

I guess so. Then again, imagine being the schmuck who took that picture. Kerry is a worthy subject for public harassment, but I bet this person has taken other photos of passengers not wearing their masks, either briefly or in defiance. Boorish, idiotic, possibly dangerous behavior right now, but you’re going to feed someone to Twitter? These are digital ovens, social media only one of the many daily human fires we must face and do our best to avoid, because this world needs feeding.

It’s a sick machine, and Maureen Dowd is going down with the continent. Her column for The New York Times last week, “Old Pol, New Tricks,” was a piece of fan-fiction, someone who respects, even admires, the people she covers. Nothing new from Dowd, but prose like this is particularly hallucinatory after four years of wide awake emergency mode under Donald Trump: “So now comes a delicious twist: President Biden is being hailed as a transformational, once-in-a-generation progressive champion, with comparisons to L.B.J. and F.D.R. aplenty, while Obama has become a cautionary tale about what happens when Democrats get the keys to the car but don’t put their foot on the gas.”

How much is Dowd paid? Or is she just “stoned in public,” like Cher or the Eve 6 guy? Who’s comparing Biden to Roosevelt? Chuck Todd? Rachel Maddow? Most of the column is about Biden getting back at “Obamaworld” for disrespecting and discounting him while he was Vice President. The Obamas kept him out of their social circle—as Dowd puts it, “As vice president, Biden worried that the Obama and Valerie Jarrett crowd at the cool table were too cerebral sometimes, that they’d rather be right than win.”

Dowd’s correct that Obama’s own political meekness “greased the runways” for Trump, and she concurs with my dad that, “Obama seems more comfortable as Netflix talent, sitting pretty with celebrities and chit-chatting with Bruce Springsteen in their new Spotify podcast, Renegades: Born in the USA.” What’s striking about this piece, in the country’s primary liberal organ, written by a company woman about the previous Democratic President, is how honest and harsh it is. “Obama hated politicking—shockingly,” obvious since at least 2010 but finally widely acknowledged. When the Times gets around to addressing Obama’s casual attitude toward drone strikes, I’ll probably be in a rocking chair, immobile, incontinent, and indifferent to any of this nonsense.

But take a hit of this for a real trip, Dowd on our current President: “Biden, by contrast, is a natural-born salesman, the son of a salesman, who loves nothing more than to mingle with the masses. Democrats think it’s really kind of cool. Imagine that.” I’m trying, Maureen, I’m really trying, and it’s driving me into a clinical depression. I want to eat a salad, read a book, write some emails. I can only be so assuaged by the Times publishing legitimate criticism of Obama when it’s mixed in with this insanity. BIDEN ISN’T DOING ANYTHING! I really don’t mind if Kamala Harris is running the show—good! She’s not losing her mind, she’s not going senile.

Dowd's Times colleague Frank Bruni, on Biden's "disappearance": "It’s a curious thing, and I’m in no way saying it’s a bad one. If anything, it’s the opposite. It’s arguably the reason he finally got to the Resolute desk after two botched tries. It’s why there’s now talk of his presidency as a transformational one [...] He’s coming to your rescue. He's sending you money. Emphasis on 'your' and 'you.'" Emphasis on the remaining $600 he owes me and everyone else, and what's this "Resolute Desk" shit? These people are covering the White House like a football team, full of unctuous worship and a suffocating sycophancy that I hope is motivated by money, because if this stuff is earnest, good lord.

I can only write so many tongue-in-cheek articles about Biden giving daily press conferences or debating Putin. He could never do it. I’m not linking to the same Michael Brooks video of Biden 2016 vs. 2020, just Google it, throw the late king some bones. I voted for Biden out of spite, in a safe blue state with zero chance of Trump even approaching a win, and I still voted for Biden because the way Trump denied and tried to pretend the virus wasn’t real was so beyond pathetic and miserable, he should’ve been dismissed immediately. Biden, even if he’s propped up like a mummy, is being proactive about vaccinations, and certainly isn’t denying it or casting suspicion on masks.

Good! Great—really! Again, I voted for the guy in a safe blue state because Trump’s handling of the virus was so contemptible, and I voted for him knowing he probably can’t remember his wife’s name. I’m sure he’s reminded whenever he goes out in public. Fine! Whatever! That’s what Vice Presidents are for! Just let Harris be president! I feel like I’m taking crazy pills, I can’t watch another pundit or read another journalist act as if Biden is in any way “active”—physically, mentally, intellectually. The guy is gone. No glee in this, believe me. So why go on speaking a lie? You can speak some lies into existence, but not this one.

Beyond that, Dowd is out to lunch with the FDR and LBJ comparisons, because an enormous amount of people felt very strongly about both of those men, and no one feels strongly about Joe Biden. Let him operate in the Oval Office alone, and let Harris be de-facto president. That’s already the situation! It’s fine! Just be real about it! I’m not the only one infuriated by this reversion into fan-fiction and complete denial and refusal of reality. Talk about greasing the runways!