It’s Barbour’s bad fortune that in 2012, Americans simply won’t elect a man from Mississippi, no matter how qualified. 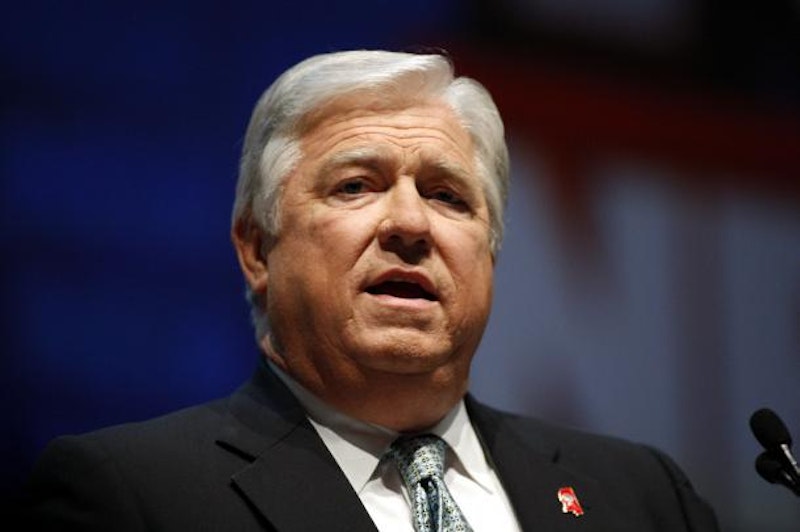 Take all the political commentary about the 2012 presidential election in the past two weeks and chuck it out the window. A year from now, Donald Trump (and how any self-respecting journalist can still refer to him as “The Donald” is beyond me) will have recovered from his ongoing public humiliation and moved onto a new arena for self-aggrandizement and profit. Michelle Bachmann will still make noise and issue ludicrous policy statements, but few will listen. Seven kinds of compromises between Democrats and Republicans about the budget and debt ceiling will have come and gone, and, like the majority of arcane issues, won’t have a significant effect on the 2012 presidential election. Rep. Paul Ryan is likely to still elicit satire and exaggerated scorn from the left-wing media, both sensible and idiotic, but nonetheless deservedly rise as a national GOP leader. Mitt Romney, after suffering defeats in the early going of the Republican primaries, will retire from politics and maybe compete with former President George W. Bush for Bud Selig’s job as Major League Baseball commissioner.

And the praise President Obama will deservedly receive for the killing of Osama bin Laden will slowly fade, just as the first President Bush’s sky-high poll ratings at this point in 1991. In the end, the 2012 election will be about the… well you know the phrase, stupid.

But today, there’s one piece of recent news that I know is significant and a huge break for Republicans: Gov. Haley Barbour’s decision not to seek the presidency.

Like anyone who writes about politics and is fascinated by the sport of it all (and any pundit who still derides the quadrennial spectacle as a “horse race” is lying), I read analyst Charlie Cook every week with a varying degree of interest. It’s a fallow period right now for Cook (and colleague/competitor Larry Sabato), not long after the midterm elections and a still unsettled field to oppose Obama, so his musings tend to be dull and obvious exercises in marking time before the action really begins. But Cook is obligated, both for his bank balance and professional reputation, to spit out the dissection of ephemeral polls and parsing of current unemployment numbers, and I’m not so much of a misanthrope to chastise the number-crunching “guru” for sleep-walking through this part of the election cycle.

However, in his April 30 column in the National Journal, Cook confounded me by lamenting Haley Barbour’s sensible decision to take a pass on running for the presidency. Cook writes:

[Barbour’s] announcement that he will not seek the Republican presidential removes one serious, intelligent, and adult contender from the field… [F]or all of Barbour’s good-ol’-boy, back-slapping bonhomie, he understands the strengths, weaknesses, and needs of the Republican Party and the problems facing the country better than almost anyone else in the GOP.
Never mind the irritating cliché of dismissing fringe candidates as non-adults (Herman Cain, Bachmann, Trump, Sarah Palin—this time around; same goes for Ralph Nader, Al Sharpton, Dennis Kucinich and Dan Quayle in the past—aren’t 15 years old), the fact that Cook, as mainstream as they come, believed that Barbour had even a chance of knocking off Obama next November makes me wonder if he was drinking the same psychedelic potion on this rare occasion that Paul Krugman indulges in every time he sits down to write an apocalyptic column for The New York Times. For it’s incontrovertible that however bright, politically savvy and adept at fund-raising that Barbour is, he stood less a chance of defeating Obama than even the eccentric (to be charitable) Rep. Ron Paul.

A few reasons why:

Americans will not elect a Republican with a pronounced Southern drawl. Jimmy Carter and George Bush had a twang (turned on and off) but when Barbour speaks it’s almost necessary to have a translator present. And, no disrespect to the Deep South intended, but the country’s independent voters who’ll decide the election, simply won’t cotton to a heavy-set older man from Mississippi, regardless of his undisputed intellect. Ask former Sen. Phil Gramm, from neighboring Texas, who flamed out in 1996: of course he was a superior candidate to the nominee Bob Dole, but his drawl and plain looks did him in.

I’m not sure what’s electorally more damaging, Barbour’s accent or his background as a lobbyist, Beltway insider and prodigious fund-raiser. Maybe it’s a draw. Rules change with every presidential election and in 2012, the word “lobbyist” is poison, as is a reputation for effective fund-raising. Oh, this applies only to Republicans: Obama, already running for reelection and bragging about his intended record-setting billion dollar warchest elicits mere tut-tuts from the mainstream Democratic media, as the supposed disdain for big money (a majority of it corporate!) is aced by the necessity of re-electing an undistinguished president who nonetheless believes in anything “green,” seeks approval on the world stage and is an Ivy Leaguer.

And, not surprisingly for a 63-year-old Mississippian, there’s the question, fair or not, of whether Barbour is a closet racist. I’ve no reason to believe this is true, but Barbour made a mess for himself by telling The Weekly Standard’s Andrew Ferguson in profile late last year that he didn’t recall the racial atmosphere in his hometown of Yazoo City in the early 60s as “being that bad.” He tells Ferguson that he remembers Martin Luther King, Jr. speaking at a fairground in the area in ‘62, but doesn’t recall what was said. “I don’t really remember,” Barbour admits. “The truth is, we couldn’t hear very well. We were sort of out there on the periphery. We just sat on our cars, watching the girls, talking, doing what boys do. We paid more attention to the girls than to King.”

Innocent enough for a teenager, but Barbour has a higher bar than other candidates when the topic of civil rights is raised. The Governor issued a pro forma “clarification” to Politico after the Standard story came out, but the damage was done. The Republican nominee will have to win a number of battleground states to defeat Obama, and no matter how dissatisfied an independent Pennsylvanian or Ohioan, for example, is over the economy, the hint of racism will queer the deal. It just doesn’t feel right, especially when the President is a black man whose paramount legacy may be that, like JFK making presidential politics safe for Catholics, he broke the racial barrier.

It’s my hope that Indiana’s Gov. Mitch Daniels persuades his family (allegedly the main hurdle for his own presidential run) that the awful invasion of privacy they’ll endure is a worthy sacrifice for the potential of winning the White House and attempting to restore fiscal order in the country. Daniels, almost alone among the announced and potential GOP candidates, could give Obama a real fight, a campaign that would feature two serious men with vastly contrasting views, offering Americans a real choice. I don’t doubt Barbour would also have competed against Obama with dignity, but as he obviously realized, a man from Mississippi who’s known as a deal-maker in D.C. didn’t have a prayer of winning in 2012.