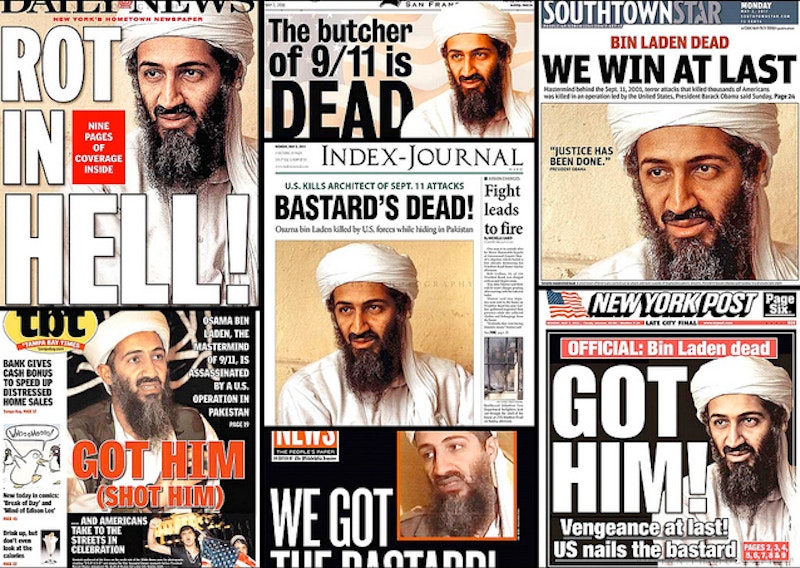 Nearly 10 years after 9/11, the feeling was a tiny bit muted, but it was still exhilarating to hear Sunday night that Osama Bin Laden was killed by the USA. It’s a little weird to be so jubilant over another person’s death, but there’s no doubt in my mind that the spontaneous celebration across the country is justified. Osama Bin Laden and Al-Qaeda wreaked havoc on our soil, but that trauma was especially overwhelming and lasting in Lower Manhattan, Washington, D.C. and Shanksville, PA. 9/11 was the defining moment of my family’s life, and it’s a joyous relief to know the man responsible is six feet under (sans virgins).

Living in Lower Manhattan immediately after 9/11 and into 2002 was a nightmare. Evacuated shortly after the attacks, camping out at my eldest uncle’s uptown apartment, we couldn’t go home for two weeks, and when allowed back into our Tribeca loft all we could smell was the fumes from the crematorium that Ground Zero had become. Dust and ashes covered the roof of our apartment. It was complete and utter Hell. My parents saw people jump from the Trade Center towers with their own eyes, and live with it every day. Posters of missing persons covered walls across the city, makeshift and heartbreaking shrines dotted the landscape, and for months despondence was the prevailing mood. No zombie horror film could come close to real life. Even at the age of nine, I understood what had happened and immediately knew what it meant: the world, and my life, would never be the same.

Osama Bin Laden was as much an unambiguous symbol for Evil for my generation as Hitler was 60 years earlier. I think pretty much every kid in my third grade class that year had either an Osama dartboard or toilet paper with his face on it well into 2002. The red hot hate I felt for him 10 years ago dimmed, and honestly I thought we’d never know where he ended up—that kidney condition could’ve killed him years ago. I’d forgotten the bitterness, but this unexpected news has brought it all back. To my generation, he was our Devil, and for five years after 9/11 I was sure another attack was just around the corner. I was absolutely certain we’d be done in by a nuclear attack on July 4, 2002, or that the Statue of Liberty would topple and take my house with it. I still get nervous on planes.

I’ve seen a few people bemoan the spontaneous celebration this news has caused on Facebook, and while it is a confusing mix of emotions, the little boy in me is relieved to see Bid Laden perish. He gave my brother and me endless nightmares and left us unsure whether we would survive the next day for months. The direction our country took after 9/11 was confused and bungled, and we quickly lost the unity that the attacks brought us. To New Yorkers and kids my age, Osama Bin Laden was the face of Pure Evil, and his death is more of a symbolic triumph than anything else, since Al-Qaeda lives on. In 2001 I wished every day for the death of Osama Bin Laden, and 10 years on, I have no qualms rejoicing in his demise.

I hope the fucker burns.