The God of Our Fathers

Get ready: the National Day of Prayer is nigh. 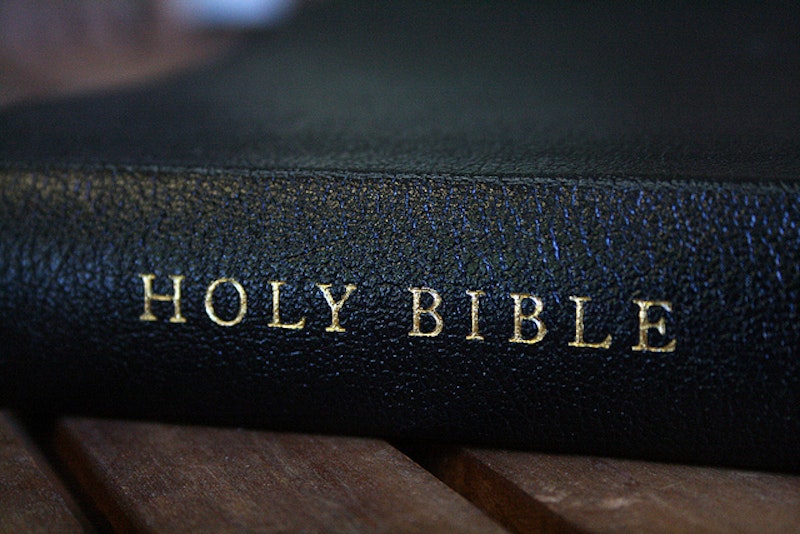 If you need a good laugh, head over to the National Day of Prayer Task Force site and watch this year's theme video. As dark and roiling clouds gather over the US, from picturesque farmhouses to capital buildings, intense music with choral chanting warns of impending doom if we “forget the god of our fathers.” Clearly, the wrath of that god (obviously the Christian one) is going to fall down and wipe this country from the face of the earth. Luckily for us all, some kid puts down his Wii long enough to kneel in prayer, some girl stops fantasizing about Justin Bieber to crack open a Bible, and just like that, disaster is averted! Hoorah! Granted, there were no girls in bikinis, but Michael Bay would be proud.

I suppose the members of the Task Force, headed by Shirley Dobson, wife of Focus on the Family's James Dobson, are feeling a little embattled since their cherished holiday was declared unconstitutional last year. Although the Obama administration is appealing, U.S. District Court Judge Barbara Crabb ruled that the National Day of Prayer violated the establishment clause because it advocated an inherently religious activity with no secular purpose. However, Judge Crabb stayed her ruling so that the holiday could continue to be celebrated until the appeals are exhausted.

So this year's plans will likely go on as usual. The President will issue a proclamation recognizing the day, as he did last year. The Task Force and their supporters will see this lack of enthusiasm from the executive branch as a sign that the country is drifting away from god and will fret about what the founding fathers would think. And those secularists among us will be left scratching their heads once again over why people seem so desperate for a government endorsement.

The other really puzzling thing about the National Day of Prayer is the assumption that, by virtue of being ecumenical, it will somehow create a common sense of purpose across different religions, political factions and ideologies. There’s an idea that if we all pray together, our various gods will reveal a common plan for the future of America. But aren't people going to be praying for and about different things? And aren't some of those things going to contradict each other, even within similar denominations? No doubt the Dobsons will feel god spoke to them through prayer and affirmed their belief that homosexuality is an abomination, while gay Christians will describe the god they spoke to as one of love and acceptance. Does the fact that they happened to be praying on the same day bring the content of their prayers any closer together? Do their combined prayers impact the reality for gays and lesbians in this country? I'm thinking not.

So how is the National Day of Prayer supposed to be a positive event for America? It seems to me that Judge Crabb's suggestion that the day could instead be a National Day of Religious Freedom would be a far more appropriate and accurate. Let's celebrate the fact that such disparate communities can worship as they please (or not, if they are secular) and hold different opinions, yet still be countrymen and women. It would be entirely fitting for the government to set aside one day a year to remind people that whatever their religious differences, they still have a place in the political process. So this May 5th, that's exactly what I'll be praying for.