The Many Trials of Rick Sanchez

You know, like general geography and learning when to keep his mouth shut... 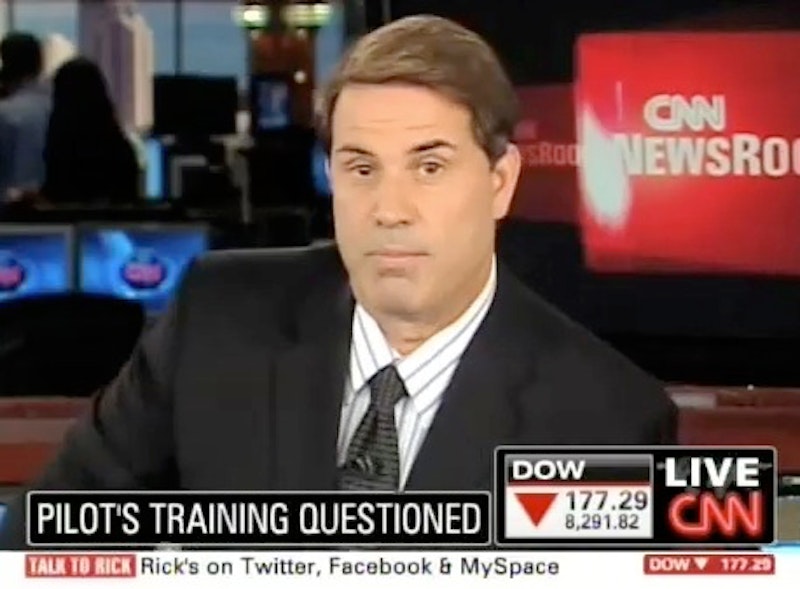 By now you’ve heard about the sudden end last week of Rick Sanchez’s tenure as a CNN anchor. Complaining about being repeatedly subjected to Jon Stewart’s barbs for his alternately histrionic and downright goofy appearances on the network and as host of the daily “Rick’s List,” Sanchez went on Sirius XM’s “Stand Up with Pete Dominick” last Thursday to promote his recent book, the obliviously titled Conventional Idiocy.

When the subject of Stewart came up, the Cuban-born Sanchez suggested the Daily Show anchor was a “bigot,” one of the “elite, Northeast establishment liberals” who “deep down, when they look at a guy like me, they see a guy automatically who belongs in the second tier, and not the top tier.”

Pressed by Dominick on how Stewart could be a bigot when he’s a member of a minority himself, Sanchez eagerly walked right into it. “Very powerless people. He’s such a minority, I mean, you know ... Please, what are you kidding? ... I’m telling you that everybody who runs CNN is a lot like Stewart, and a lot of people who run all the other networks are a lot like Stewart, and to imply that somehow they—the people in this country who are Jewish — are an oppressed minority? Yeah.”

Sanchez’s career at CNN was probably dead before the Dominick appearance ended; it was officially over on Friday. Since then, Stewart’s enjoyed a laugh over the incident—as emcee of Comedy Central’s annual “Night of Too Many Stars,” airing Oct. 21, he told the crowd: “All he has to do is apologize to us, and we’ll hire him back”—while over at MSNBC, Keith Olbermann predictably had his own fun.

But the inevitable Sanchez backlash reached new heights in an unlikely spot yesterday: CNN itself. On Reliable Sources, Howard Kurtz—himself no stranger to accusations of blithering twittery—played a video medley of Sanchez’s “greatest hits,” including marveling at how a place as cold as Iceland could have a volcano (rather than “Hawaii, and long words like that”) and the now-infamous segment where he’s willingly Tasered (“It hurts,” he helpfully notes).

During the Kurtz report, former CNN correspondent Jamie McIntyre remarked: “I think the unfortunate part, actually, is that Sanchez was fired for these intemperate comments and not really for what he did on CNN, which is seen by many people in the industry as kind of a joke... it’s okay to be entertaining, and I think people want that in television news. But what’s missing there a lot of times is the context. And in the course of doing that, he did a lot of sort of things that came off as very silly.”

Just so. The real question is not why Sanchez was fired, but why it wasn’t done sooner. Thanks to Stewart and others, his blatant boobery was hardly a secret. A former MSNBC anchor, Sanchez was hired by CNN shortly after Jon Klein became president of its U.S. operations. Despite his pledges to maintain CNN’s status as politically neutral (at least when compared with MSNBC and Fox News), Klein’s tenure must be judged a failure, from overseeing the preposterous Situation Room set and John King’s “Magic Wall” to being, as Wonkette put it a few days before Klein’s own firing last week, “the genius executive behind such hits as ‘A Retarded Person Named Rick Sanchez Is Confused By Earth But Fascinated By Fire and Loud Noises.’” (The Wonkette piece, noting that Klein is being succeeded by HLN honcho Ken Jautz, is headlined “CNN Will Become Sleazy Moronic Copy of Headline News.”)  The timing of the generally disliked Klein’s firing is telling: He was let go on September 24, before his two latest gambles—hiring Piers Morgan as Larry King’s replacement, and making Eliot Spitzer co-anchor of a primetime news program that bows tonight—either flop or fly. Evidently CNN had had enough of Klein’s own programming pratfalls, and Sanchez’s remarks couldn’t have come at a better time.

So long for now, Rick Sanchez. The only thing left now is to see what Stewart says on tonight’s Daily Show, and to count the days until Rick appears on the show to “good-naturedly” eat crow. I’ve got October 21 in the betting pool.