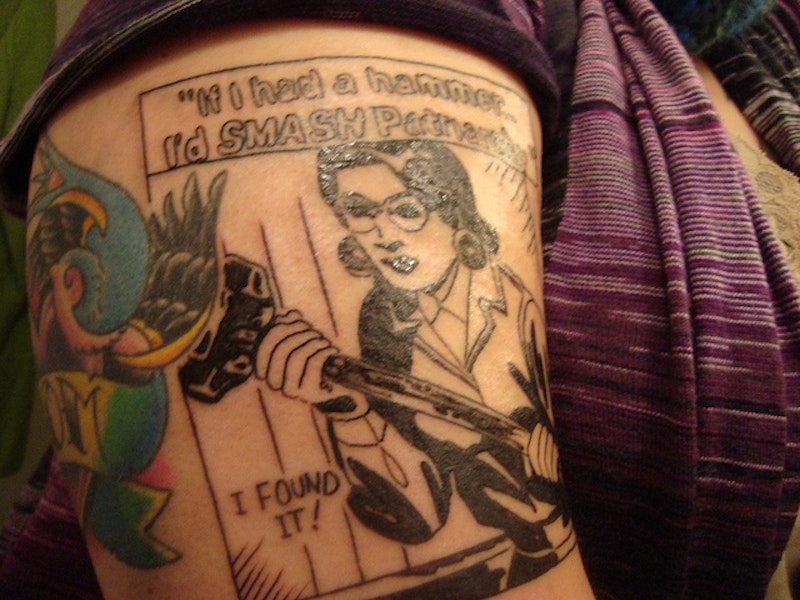 Patriarchy is sort of dead, A.O. Scott informs us in a lengthy, enjoyably meandering, sporadically incoherent essay in The New York Times. Starting with the possibility that Don Draper will die at the end of Mad Men, Scott wanders with a professorial, befuddled erudition amidst the cultural landscape, noting the success of YA here, the legacy of Sex and the City over there, and Beyoncé claiming feminism back over that way. Put it all together, he says, and you've got a world in which adulthood isn't what it used to be—in which everyone from Louis CK on down sees how ridiculous dad and the law are, separate or together. "The world is our playground," he concludes, "without a dad or mom in sight," a situation that he sees as both exciting and disturbing.

Scott suggests that these sorts of infantile aspirations are part and parcel of the history of the United States—from young Ben Franklin rebelling against King George to Huck Finn lighting out for the territory to grown adults reading YA. It's all indicative of the American resentment of authority and love of free-spirited destruction of idols. The excursion into the past is meant to buttress Scott's overall argument about the waning of (at least symbolic) authority. But instead it tends to undermine his claim that we're living in a particularly anti-parental moment. If the U.S. has always hated daddies, then what's so new about it hating daddies now? And does it really make sense to talk about the end of patriarchy if patriarchs have been under attack for, by Scott's estimation, over 200 years?

What Scott's argument fails to take into account is that no one hates patriarchs as much or as heartily as patriarchs hate patriarchs. That's what the Oedipal complex is about; the son wants to kill the father in order to replace him. The new boss is always pulling out the scimitar to chop off the head (and/or other bits) of the old boss. And then the new, new boss shows up to off the old new boss, and on and on aboard that anciently infantile merry-go-round. Scott himself illustrates the dynamic in his essay, as he veers back and forth between "get off my lawn" and celebrations of the new youthful spirit of fandoms and super-hero movies. He's both the old doddering daddy and the young punk ready to take him on—two tried and true patriarchal roles.

Even Scott's bumbling lumping together of youth revolt and feminism fits neatly into patriarchal logic. The one real adult is the daddy; everybody else, women and children, are under his thumb until they knock him over. Beyoncé's strutting girl power and reading Harry Potter when you're 40—both are "signs that we are freer, more honest and happier than the uptight fools who let go of such pastimes." Every rebellion is measured in the distance it puts between you and the father. Patriarchy remains the standard to fight against and/or (in Beyoncé's massive financial success; in the adolescent empowerment fantasy of Harry Potter) to surreptitiously embrace. Scott's essay doesn't so much prove that patriarchy has gone as it shows the extent to which our culture is still shadowed by the big, bad daddy, the disapproving arbiter who (like Scott) smiles indulgently or frowns disapprovingly at the women and children performing their various familiar rebellions for his amusement and edification.

To get out of the logic of patriarchy, it seems like you need to do more than just re-enact the same repetitive dramas of rebellion. You need, in fact, to figure out something to talk about other than patriarchs dying. One person who has done that is Kathleen Gilles Seidel, a longtime romance writer whose novels Keep Your Mouth Shut and Wear Beige (2010) and A Most Uncommon Degree of Popularity (2007) are both about middle-aged women who don't rebel against anything. Instead, they try to manage their relationships with kids, with husbands, with ex's. They don't break free or stick their tongue out at authority; they just work to figure out how to love and take care of others while being loved and taken care of themselves. Both novels are quiet books about working at being adult, which is precisely why they don't fit into the patriarchal default narrative of generational conflict. The books, also, and not coincidentally, aren't especially popular or well-known. For all the talk about the end of patriarchy, the fact is we still generally prefer those patriarchal stories about the patriarch getting his—whether those stories are televised or penned by A.O. Scott.