If passed, HB 1215 would make discrimination against LGBT people legal and institutionalized. 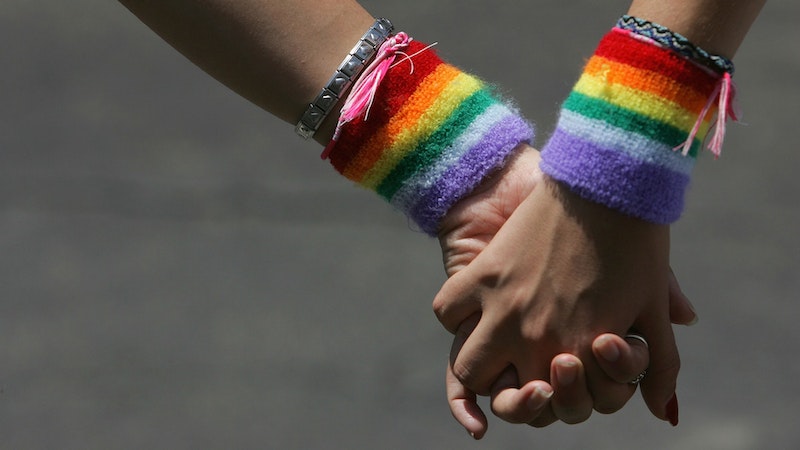 Last week, Rep. Tony Randolph of South Dakota introduced one of the most anti-LGBTQ bills ever. If passed, HB 1215 would ban same-sex marriage, make it legal to discriminate against LGBTQ people, prohibit tax dollars from going towards gender affirmation surgery, ban Drag Queen Storytime from public schools and libraries, keeps conversion therapy legal, and outlaws the ability for trans people to get their gender markers changed. “[HB 1215] is the kind of dangerous bill that threatens the integrity and dignity of LGBTQ people living in South Dakota,” Kara Ingelhart of Lambda Legal told NewNowNext. “That sends a dangerous message to everybody.”

HB 1215 came just a day after the South Dakota House passed a bill that would criminalize healthcare for transgender youth. Under HB 1057, doctors who give puberty blockers and hormones to trans kids under 18 will be charged with a misdemeanor. Ironically, the bill does permit doctors to perform surgery on intersex babies, which is medically unnecessary and has long-term negative effects. There’s also no evidence that puberty blockers and hormone replacement therapy have any negative side effects on children; in fact, a recent report published in Pediatrics shows that puberty blockers reduce suicidal thoughts in trans youth.

It may seem like these anti-LGBTQ bills have spontaneously appeared, but they’re just the latest examples of a war South Dakota lawmakers have been waging against LGBTQ people for years. Last year lawmakers introduced two anti-trans bills: one that would ban any discussion of either trans people or gender dysphoria in public elementary schools, and one that would prohibit trans student athletes from playing on the teams that match their gender identities. (The latter failed, but the former passed.) The state also introduced one of the first anti-trans bathroom bills in 2016, but Gov. Dennis Daugaard vetoed it.

Janna Farley, Communications Director of the ACLU of South Dakota, told me that the state is thought of as a “testing ground” for anti-LGBTQ bills. The legislation session is only 40 days long, each bill has a committee hearing, and it’s cheap for organizations to buy ads. “It's a lot of ways for people who are interested in supporting these kinds of bills to come in and try to make some inroads,” Farley said. “It's like, ‘Oh, if it passes here, why maybe there's a greater chance it could pass in other states as well.’”

Farley doesn’t know if the anti-LGBTQ bills in South Dakota is part of Project Blitz, a Christian nationalist movement that aims to turn American into a Christian theocracy, but Rebecca Isaacs of the Equality Federation thinks so. “In 2018 alone, more than 70 of these Project Blitz-related bills—including anti-LGBTQ bills, bills that would undermine reproductive health care, attempting to inject religion into public schools—these were bills that were introduced in state legislatures across the country, so it’s really something to look out for,” she told the Washington Blade last year.

There’s not a lot of information online about Rep. Randolph because he has no social media presence but judging by what little I could find, he wants South Dakota to be governed by Christian fundamentalism. Around the same time he introduced HB 1215, he also introduced a bill that would make irreconcilable differences not be grounds for a divorce. Adultery and abuse would still count, so the bill is Rep. Randolph’s way of implementing the Bible’s teachings about divorce into law. He also introduced a bill last year that would allow creationism to be taught in public school science classes, which didn’t pass.

Farley told me the ACLU of South Dakota will campaign against the bill as much as they can. “We’ll lobby against bills like this,” she said, “and of course encourage our supporters to contact their senators and representatives to voice their opposition to the bill as well.” Farley is also optimistic that HB 1215 will fail. “I think there’s a lot of widespread opposition to the bill” she told me, “and just from what we’ve heard from people when they’ve seen that this legislation has been proposed, there's a lot of outrage.”