A David vs. Goliath analogy has been extended to the differences between Putin and Zelensky's wardrobes. 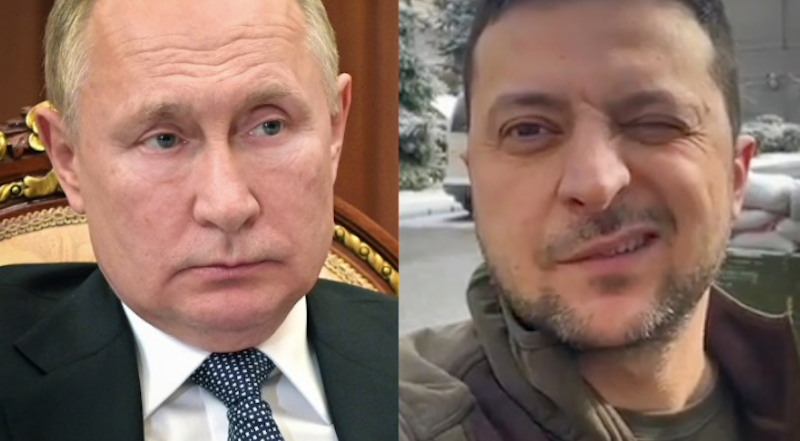 Since the Russian invasion of Ukraine commenced at the end of February, the David vs. Goliath analogy has been invoked to describe the relationship between the two countries and their leaders, Vladimir Putin and Volodymyr Zelensky. Cast in the role of Goliath, Russia has obvious advantages, like military size and might. Meanwhile, Ukraine’s David, with Zelensky underestimated by both national and foreign politicians, for his background in entertainment and lack of experience in politics. This analogy has been extended to the difference between the two leaders’ sartorial optics.

Rising in the ranks of the KGB, and the Soviet political machine, Putin has carefully crafted a public persona that exudes machismo, business acumen, and wealth. More often than not, he’s seen wearing a custom-tailored suit from brands such as Kiton and Brioni, which cost about $5000 each. In March, shortly after the invasion of Ukraine, he was spotted wearing a $10,000 Loro Piana coat. As Russia Today reported in 2015, he also has a penchant for luxury timepieces, and owns a rare Tourbograph Pour le Merite tourbillon watch by A. Lange & Sohne that’s worth about half a million dollars.

Zelensky has made most of his public appearances in a simple item of clothing that’s a staple of wardrobes worldwide: the t-shirt. Usually in some shade of olive green or tan brown, interspersed with an occasional black one, Zelensky’s t-shirts have either been undecorated, or have featured national symbols that further emphasize his resistance to Russia to his audience.

In color and fashion psychology, green is generally a calming, motivating color, which is a smart subconscious message to send during wartime. Certain shades of green and brown, including those worn by Zelensky, function as effective camouflage in outdoor combat situations and have been, for that reason, adopted by military powers around the world. By wearing these, he’s showing Putin, the Russian army, and the Ukrainian people that he’s the strong, powerful leader of the country and its armed forces, a far cry from his days as an actor.

Some of his t-shirts have featured the contemporary Ukrainian flag— the most explicit symbolic rebuke of Russia’s aggression found on his clothing thus far. One of the few occasions when he wore a t-shirt featuring text, the flag’s meaning was accompanied by the overlaid words “We are defending our freedom” (in English, nonetheless), elevating his messaging from symbolic to literal during his nightly video address on July 6th. Other days, he’s worn shirts featuring the Ukrainian trident, or Tryzub, which has been found on coins from as early as 945 C.E, and is used to symbolize the nation’s history.

Prior to making his major career shift into government, Zelensky starred as the main character, the Ukrainian president, in the comedy television show Слуга народу (Servant of the People). Having worked hard to convince seasoned politicians that he could successfully fill this role in real life without the many mishaps in the show’s storylines, his sartorial choices during this period in the country’s history demonstrate that he’s a servant of his people. The most important message Zelensky is sending is that of stability and trustworthiness. Much like his daily addresses to the Ukrainian people, his t-shirts are reliable, no-frills items of clothing that are relatable. Zelensky would be hard pressed to find a fellow countryman who doesn’t own at least one t-shirt. On the other hand, Putin, dressed in his lavish outfits, may find it hard to relate to the majority of the Russian population, where the average monthly salary can’t even cover the cost of a quarter of one of his suits, let alone his Italian cashmere outerwear.

Optics matter. Especially sartorial ones, and especially in a war where the invading country has major economic and military advantages. If Zelensky is Ukraine’s t-shirt clad David, capturing the attention and hearts of those in Ukraine and beyond, it’ll be interesting to see if he can convert that support to the kind of long-term aid that will allow him to defeat the besuited Goliath.

—Doris Domoszlai-Lantner is an historian and archivist of fashion and dress. Read more about her work at www.dorisddl.com and follow her on Instagram and Twitter @doris_ddl