Sarah Palin is Not Secretly a Genius

And other obvious truths that shouldn’t need proving. 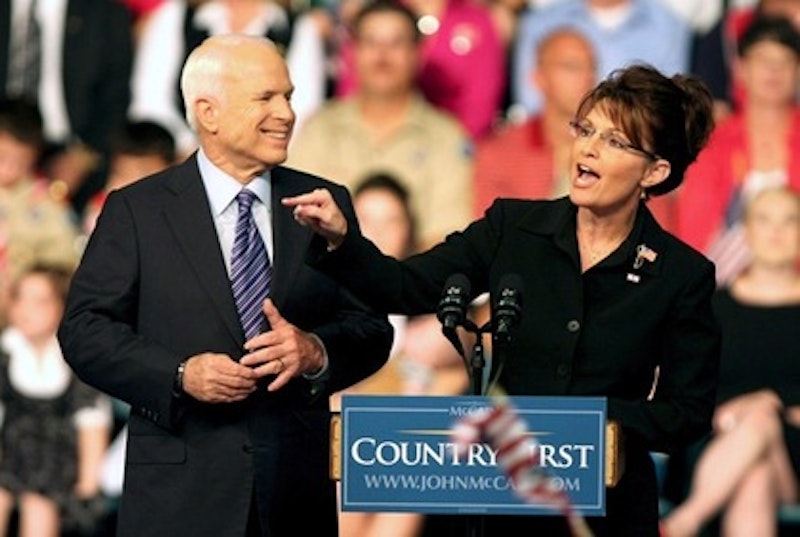 Some very smart, very serious people have been spending a lot of time lately working themselves into a tizzy trying to defend their ongoing romance with the Governor of Alaska. “Okay,” they seem willing to admit, “Palin might be a little weak on foreign policy, domestic policy, energy policy, financial policy, the economy in general, the fundamental workings of the state and federal government, geography, rhetoric, history and basic grammar, but these are just gaps in her knowledge, easily fixable by a spending a few hours in front of Wikipedia or flipping through flash cards. They don’t in any way cast doubt in some fundamental way on her intellect or character.”

This is such a bizarre and indefensible thesis that one almost feels bad responding to it, as one would the taunts of children or the developmentally disabled. I had hoped that as the election subsided the Governor’s defenders would shrink away chagrined, the bitter morning light revealing the object of their affaire de coeur a false Aphrodite, her nails pasties and her luxurious hair a weave. But the choruses of “Palin 2012” have not abated and thus it becomes necessary to dispense with this whole “Palin is smart but untutored” meme once and for all.

First, Gov. Palin may be young for a politician but she is not in fact actually young. Forty-four is a lot of years to have spent walking the earth without having learned all the countries involved in the North American Free Trade Agreement (there are three, and she’s a governor for one of them.) The suggestion that she’s some sort of prodigy who just hasn’t been exposed to basic civic information is absurd. If this woman were anywhere near sharp enough to be put in charge of any major undertaking she would have picked up this information solely by osmosis after nearly a half-century.

There is also the assumption that all of these nuanced policy-related questions are somehow out of her bailiwick, as if someone sprinted up to her and demanded in-depth information about how to caulk a faucet or snake a drain. But Palin isn’t ignorant as compared with say, the head of the CIA or the Secretary of Education—she seems to lack fundamental knowledge about basic information. Her inability to name a Supreme Court decision in the Couric interview, or obviously the whole is-Africa-a-continent thing—this isn’t like being unsure of the sub-chairmen of the Pakistani senate. Any reasonably intelligent individual, interested in the workings of the society in which they operate and the world in which they reside would have been able to pick most of this stuff up. To return to the previous analogy for a moment, this is the equivalent of expecting her to know that excrement goes in the toilet and not the sink—you don’t exactly need to be Joe the Plumber to have hashed that one out.

All this, of course, is putting aside the obvious truth that she is not only a politician but also an elected official, and thus expected to be capable of coherent speech about politics in general and the government that she serves in particular. The entire purpose of a representative democracy is that the people elect an individual of appropriate intellect and character who is (or at least becomes) an expert on the issues they face. Her ignorance therefore of political issues represents not simply a disturbing lack of intellectual curiosity for the executive of a state but an actual failure on her part to faithfully discharge the duties of her office.

Against these varied and reasonable objections her defenders can offer little. At best they mistake charisma for intellect, at worst they rant endlessly about elitism, as if only latte-sipping New York theater critics consider being able to present one’s thoughts coherently a prerequisite of leadership. If possible they prefer not to enter into the debate at all, fiating simply that by virtue of having obtained her post she must be an individual of substantive intellectual standing. This is a cheap form of argumentum ad populum, and its introduction into the debate is sophistry. I have no idea why the citizens of Alaska elected this woman governor—likely they intuited she wasn’t exactly the reincarnation of Isaac Newton but felt her sufficiently equipped to cut them their oil money check.  Mass democracy is a poor method of assigning merit. Hitler was elected chancellor. The people of Washington, DC elected Marion Barry governor (twice). One does not accept consensus opinion over the reporting of one’s senses and the judgments of objective reason.

It is understandable that people like Gov. Palin; she's quite likable. I kind of like her. But it's unreasonable not to recognize that the qualities one finds attractive in Palin are not the qualities that would serve the country in good stead as a national politician. Foremost amongst those traits not in the meaty section of the Venn Diagram between “Successful Leaders” and “Sarah Palin” is the ability to process and synthesize raw information. While it is true in the abstract that intellect and knowledge are not identical, in practice they are two horses that generally pull in the same harness. Ignorant people tend to be stupid, and stupid people tend to be ignorant. In my mind, any reasonable observer watching Palin’s performance since entering the national stage would have to conclude that she is both.