Rockin' in the Free World

Politics and pop music have gone together since at least folk era, but Barack Obama is the first politician to capitalize on acting like a rock star. 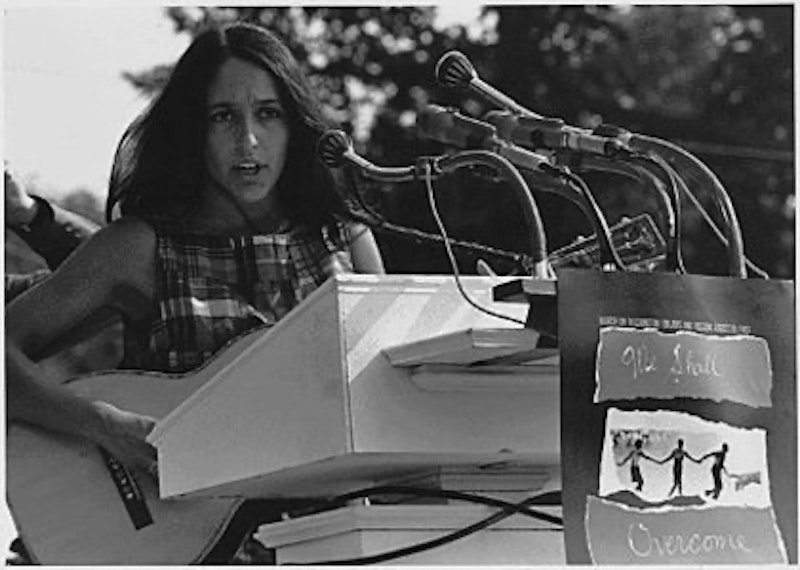 Last weekend, for the first time in my life, I felt like a square. I had free tickets to a Pearl Jam concert in Washington D.C. that my friend had won on a radio show, and we made the trip with mixed expectations. We had nosebleed seats at the Verizon Center, two non-fans wedged in the middle of the drunken, screaming crowd, but I’ll never pass up a free show. I had grown up listening to classic rock, so in a sense I missed the 90s, and Pearl Jam was one of the bands that passed below my radar. My knowledge of the band was limited to the song “Even Flow,” which I knew from the Guitar Hero video game, and I felt like one of the only people who didn’t know the words to every song. But I have been in that situation before, and that was not why I felt “uncool.”

The concert was nothing impressive, but one significant moment blew me away. The band had just finished a long, hard-rocking jam session, and Eddie Vedder spoke to the audience. Taking advantage of his position in the nation’s capital, he turned to politics, spilling out a stream of environmental facts that I’m sure he just recently looked up on Wikipedia, spliced with cliché phrases of “change” and “making a difference.” Between each sentence, the fans went wild. I rolled my eyes. Finally, at the conclusion of his spiel, Vedder said, “You have the power to change the world, and maybe now it’s time to get some color in the White House.” And there it was. A full-fledged political endorsement in the middle of a concert.

The crowd went nuts, and the band took advantage of the uproar to continue rocking on, while I sat silent in my seat like a businessman in the middle of Woodstock. In fairness, Vedder didn’t captivate the entire audience with his speech. Amidst the roar of support, I heard a faint whisper of a booing section, and the guy a few rows behind me (drunk out of his mind) was screaming “Shut up and play!” throughout the whole thing. However, the effect of the endorsement was an overwhelmingly positive one.

There’s no denying that music and politics have been tied together for years. From Bob Dylan to Rage Against the Machine, rock stars have voiced their opinions, often shaping those of their fans in the process. However, while political musicians have always been a part of the liberal counter-culture, they haven’t had a major influence. In the current election, for the first time as far as I can tell, the two personalities of real politics and cultural politics have merged.

Barack Obama is commonly called a rock star. His words are his guitar, and when he’s blaring out an insane solo, he drives the crowd crazy, and they never catch his slip-ups. He’s a lean, mean, fist-bumping machine, and that’s what scares me the most.

At my extremely liberal college, I see Obama posters splayed across hallways and dorm room doors. I see students campaigning and handing out flyers in the quad. A classic example of the conservative minority was when both the College Democrats and the College Republicans hosted events at the beginning of the school year. The Dems rented out “The Beach,” which is a huge, grassy hill that serves as the focal point of the Johns Hopkins campus. They had music blaring, free food and drinks, and the grass was packed. The College Republicans had a small classroom with less than 20 people attending, eating pizza and quietly discussing the economy.

Universities have always been liberal hubs, but Obama Nation looks to be one of the most active Democratic college movements since the Vietnam era. One possible explanation for this phenomenon is the contrast of old and young. Students can relate more to a young, energetic 46-year-old candidate than they can to the old, wizened, 71-year-old John McCain. Obama is trendy and charismatic. He’s a cool guy. But is this persona genuine, or is he really just a politician and this is a part of his game?

Take the “fist bump heard round the world” for instance. All the ludicrous Fox News terrorist propaganda aside, at the time, it was a hip and clever thing for him to do. However, I’d be willing to bet that it was orchestrated, for the same reason I believe that Hillary Clinton was cutting onions backstage before her weeping session earlier in the primary season.

But that’s one significant difference between Obama and McCain: Obama knows how to use the Internet and the media to its full potential. He knows that a fist bump or a sly comment will make it on YouTube to be viewed by thousands of potential voters, and in a way, this can be even more powerful than even the most moving speech. McCain has yet to realize this.

There’s no doubt that Obama will claim the support of younger voters, and that vote will be more significant in this upcoming election than it has been in years. For example, my best friend’s girlfriend told him, “I’ll probably vote for Obama. All my friends are.” Granted, that’s the illogical decision of one not-so-informed freshman girl, but it’s still one vote. Obama has the capability to stir up and motivate all the voters, young and old, who normally wouldn’t give a shit. Through his speeches and his “cool guy” mannerisms, he can get people out to the polls. He knows the game, he knows how to play it, and right now, he’s winning