Even after being fired from his original radio show, Don Imus can't control himself from blurting out racist remarks. But it's okay, because he referred to it as a "sarcastic point" about racial profiling. 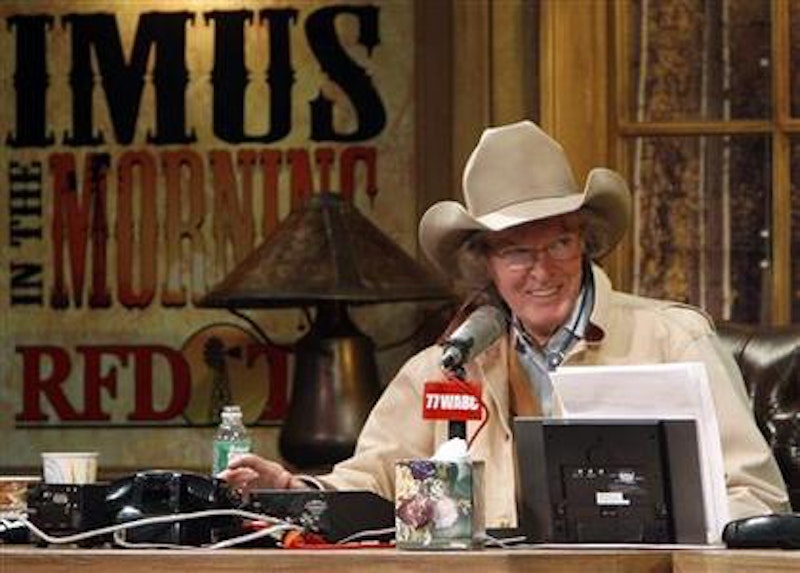 Radio blabbermouth Don Imus was at it again Monday morning.

Just more than a year after he was fired for making racially insensitive remarks about the Rutger's women's basketball team on his then nationally aired talk show, Imus spewed more racial bigotry - this time about Dallas Cowboys' cornerback Adam Jones.

During his show Monday on Boston's WTKK radio station, Imus was told by anchor Warner Wolf that Jones has a lengthy arrest record since being drafted by the Tennessee Titans in 2005.

When Wolf told Imus that Jones is African-American, the cowboy hat-sporting shock jock responded that that was all the explanation he needed to understand Jones' constant legal troubles.

During his show Tuesday, Imus said his comment had been misunderstood and that he was merely trying to "make a sarcastic point" about racial profiling.

He then downplayed the roiling controversy, calling it "ridiculous," and asked, "How insane would I have to be? What would I be thinking?"

Apparently Imus is certifiably insane. There is absolutely no telling what he was thinking when he made that comment. I guess the only thing we can hope for is that he was not thinking, but it is not like that is any excuse for committing another racial faux pas.