Robert Stacy McCain Is An Ignorant Parody of a Conservative

Leave it to a hack republican blogger to ignore rational argument in favor of communist witch hunting and ad hominem attacks. But let's play along. 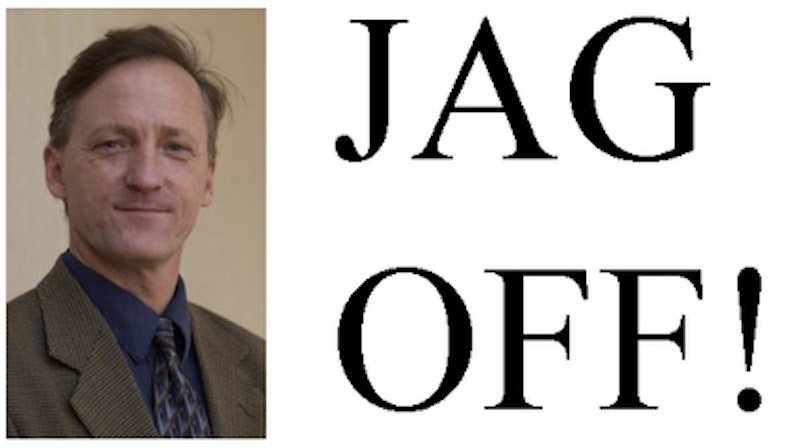 Last week I let loose my thoughts on America’s culture war, specifically how Republicans are enslaved to the notion that any money going to the arts is money unwisely spent, that nothing good can come of the humanities.

It seems that column got blogger (and occasional Splice Today contributor) Robert Stacy McCain rather upset. In a post titled “Andrew Sargus Klein is an arrogant elitist douchebag,” he lets the spittle fly (emphasis added):

Listen up, punk: I majored in drama and minored in art and managed to squeeze in two semesters of music theory along the way. Right now, I've got a day gig as a documentary film editor. I've got more culture in the tip of my pinkie than you've got in your entire swinish soul. So don't you tell me about my "knee-jerk reaction."

Klein gives us a splendid insight into the central conceit of the liberal mind: Nothing exists -- or has existed, or ever will exist -- unless it's funded with federal taxpayer dollars.

Therefore, to oppose federal funding for "the arts" is to be anti-art, just as opposing federal funding for public schools is to be anti-education. Such is the shriveled state of the liberal psyche that it never even occurs to these dimwits to let people keep their own money to spend on whatever they want. You want to renovate a theater? Go renovate a theater. But don't bring the IRS down on my back to force me to pay for your tastes in architecture.

His main point is valid. It would take a liberal with bigger balls than me to argue that the federal government is the be-all and end-all of anything of worth in our society, and such a point deserves as swift and elegant a counter-argument as McCain can offer. We can extend this to the government funding a renovation of a theater, too. Let the market—and liberal wallets—dictate architectural taste. So McCain’s argument is valid. What’s unfortunate is that he’s attacking arguments I, quite simply, don’t make.

Let’s take this slow, so as not to offend anyone or leave anyone behind.

McCain focuses on a single passage in my column, a summary of my disgust with conservative knee-jerk reactionism to the humanities:

The right has developed a visceral knee-jerk reaction to anything involving culture, and their "loyal opposition" stranglehold doesn’t seem to be loosening anytime soon. Bombs make jobs, but renovations and building projects and part-time jobs or anything else within a stones throw of a—gasp—opera house do not. This is government as violent adolescent child.

Note the phrase, “bombs make jobs.” Now note the 855 words that lead up to this passage. My point—my actual, debatable point—is that, in the context of stimulating the economy, funding the arts can be as effective as, say, dropping billions on a bomber that no one—save generals and the senators of states where the thing is made—seems to support.

Now, let’s move on toward the end of the column, a section sometimes referred to as a conclusion, to look and see if I sum up my arguments in any way:

I’m not ultimately that upset about losing billions for the arts and humanities and education (and science and culture) from the stimulus package. Straight up, there are more important things in the immediate sense. Nor do I believe the arts and humanities will wither on the vine without a taxpayer-backed bailout. But the sector’s potential for growth—growth in jobs, cultural output, international respect—is undeniable.

There’s no denying my support of arts funding to a general, tactful and useful degree. The column leaves plenty of room for debate. But not only does McCain completely blow his argumentative load, he feels the need to strut his cultural bona fides, as if they have anything to do whatsoever on the issues at hand.

But when I was your age, punk, I was driving a forklift in a warehouse on Atlanta's Fulton Industrial Boulevard, saving up money to buy a P.A. rig for my rock band. So exactly what right do you have to lecture me about "culture"? I've put my own sweat into culture, pal.
This is Christians and lions territory. These are “unzip your fly and pull out your B.A. that has nothing to do with your current profession” waters. McCain quotes an old article of mine from my college newspaper days—again, the excerpt has nothing to do with either my original column or McCain’s response; it’s a bit of whining over the lack of political art at my former campus. He fails to note the irony in the fact that it’s a fine arts column, written by the paper’s fine arts editor. What he doesn’t know (though given his propensity to snoop through years-old campus writing, I’m glad I’ve always had to-the-hilt privacy settings on Facebook) is that I was managing arts editor for two years; that I majored in art history and creative writing; I wrote, directed and acted in plays; and played in a blues band for years. So if he wants to have a meaningless “I love the arts more than you!” pissing contest, then McCain and I now have our all-important college extracurriculars on the table.

But McCain is enjoying this; he’s enjoying the fact that I’ve been forced to move out of my cave and respond to his shitbrick of a counter-argument. That’s the blogging life, I suppose. This issue is a good one, and I wish we could have sparred on actual policy and politics, rather than through Googling and personal attacks.

In what must be either a deft use of cultural irony or stark evidence as to McCain’s lack of actual cultural bona fides, he tells us toward the end of his post that his son came in the room to show him he learned how to play an Avenged Sevenfold song on the guitar. If the former, I take my hat off to you, sir; if the latter, I guess cultural bona fides skip a generation.

But in the spirit of dredging up some old fashioned ad hominem name-calling, I googled McCain. Here’s what I came up with:

So, let’s take a look at the views and not-so-hidden agenda of one of the actual editors of the paper, specifically, assistant national editor Robert Stacy McCain, who has a habit of posting commentary on message boards and elsewhere around the Internet:
"[T]he media now force interracial images into the public mind and a number of perfectly rational people react to these images with an altogether natural revulsion. The white person who does not mind transacting business with a black bank clerk may yet be averse to accepting the clerk as his sister-in-law, and THIS IS NOT RACISM, no matter what Madison Avenue, Hollywood and Washington tell us."
Yes, you read that right: a "natural revulsion" and "THIS IS NOT RACISM."

McCain, an editor and sometimes commentator at a paper that the gay Andrew Sullivan, the African-American Thomas Sowell and other right-leaning members of minority groups are only too happy to write columns for and take cash from, believes that Abraham Lincoln was a "war criminal" who should have been tried for "treason." (His reasoning, he writes, is that Lincoln and the Northerners were the true racists; something tells me–actually, studying his other comments and affiliations is what tells me–that that is not the real reason at all.)

In his Web postings McCain has stated that Harvard president Lawrence Summers should be "persecuted and run out of town" for supporting gay rights. He also believes that the civil rights movement directly resulted in "black criminality" because people were encouraged to break the law by getting arrested at demonstrations!

So the only real question left is, "Robert Stacy McCain: Hack witch-hunting blogger, white supremacist, or both?"