"Repeal ObamaCare" Is Not a Winning GOP Slogan

Republicans run the risk of squandering their best electoral chances since 2002. 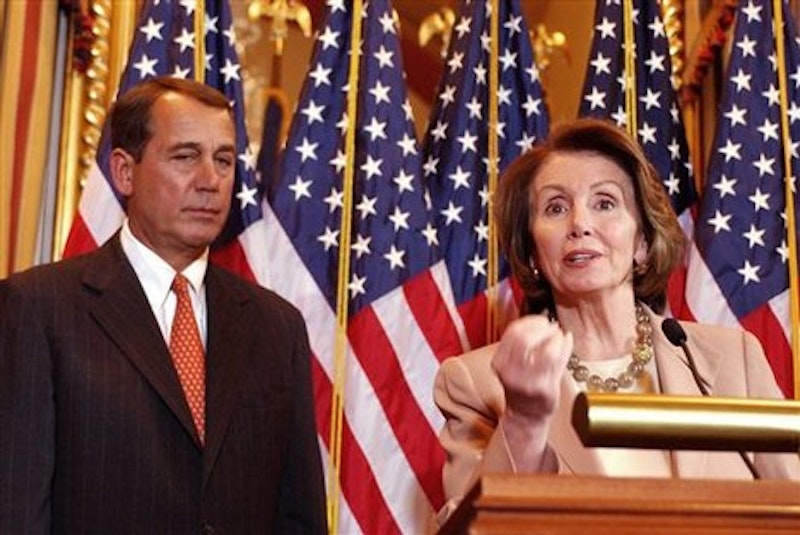 No one has accused the Republican Party in the last five years of brandishing a savvy political strategy. You might think, after the wipeouts in 2006 and ’08, someone would’ve emerged to map out a comprehensive plan to make substantial dents in the Democratic majorities in the House and Senate. A young man or woman who’d take the role that William Kristol and Newt Gingrich so successfully filled in Bill Clinton’s first two years in office—a GOP version of Rahm Emanuel. Sure, 40-year-old Rep. Paul Ryan has received favorable conservative notices for his sober analysis of the Obama administration’s redistributionist fiscal policies—and proposing across the board tax cuts—but the Wisconsin Representative, who hasn’t the necessary ego and love of brawling politics that drove Gingrich, is drowned out by hacks like Minority Leader John Boehner, Republican National Committee chairman Michael Steele and entertainers like Glenn Beck and Sean Hannity.

In addition, at this late date, the GOP field of presidential candidates for 2012 is nearly non-existent, which is astonishing given the public’s sour feeling about the country’s direction, an unemployment rate that’s likely to remain above eight percent for the next two years, and the ugly spectacle of President Obama, Nancy Pelosi and Harry Reid acting like carnival barkers or two-bit auctioneers in gathering votes for their toxic healthcare legislation. The robotic Mitt Romney’s a scratch because of his own healthcare initiative as governor of Massachusetts; Mike Huckabee, if anyone remembers him, is a charlatan; the less said about Sarah Palin, who’s cashed in on her supposed Wal-Mart everyday gal populism, the better; and Rick Perry, the empty-suited governor of Texas who, in a cheap stunt last year suggested his state might secede from the union, would get stomped by Obama.

It’s ludicrous and smarmily theatrical that opponents deride Republicans as “The Party of No”—as if speaking out and voting against Democratic legislation is somehow irresponsible—but the lack of a cohesive national platform similar to Gingrich’s “Contract With America” from ’94 ought to trouble the GOP’s leaders. (Admittedly, the “Contract” was gimmicky, but it served to galvanize Republicans.) Apparently, few Republican bigwigs realize that the likely gains they’ll make in the midterm elections this fall will be by default. Simply put, the economy still stinks, there’s palpable concern over the coming implementation of ObamaCare, and with an anti-incumbent mood across the country, the Democrats, because they’re in the majority, will bear the brunt of voter discontent.

Considering the current ineptitude of the GOP, who are experts of making lemons out of lemonade, they’ll squander the genuine anger that was on display in Massachusetts when unknown Republican Scott Brown was in the right place at the right time to capture Teddy Kennedy’s senate seat while the Democrats napped. It doesn’t have to play out like this—a 20-seat gain in the House instead of winning control; picking up four senate seats instead of eight—but as Republicans puff up their chests and declare they’re going to repeal Obama’s healthcare bill, making that the centerpiece of a national campaign this fall, it’s obvious no one’s in charge.

Kristol’s April 5 Weekly Standard editorial, headlined “Repeal & Defeat” is a prime example that even this conservative stalwart, whom I respect enormously, just isn’t seeing beyond his nose. Kristol, while acknowledging the GOP’s tough task ahead, calls for the presumably bolstered party next year to “begin to undo the damage Obamacare threatens to cause. And then, in 2012, we can nominate a candidate who campaigns on a platform of solvency and liberty at home, and seriousness and greatness abroad. This Republican nominee will need to appeal to the best traditions of both parties.”

That sounds dandy but Kristol doesn’t name even one potential candidate. Again, this matters: for example, when the hapless Jimmy Carter was floundering at this juncture in 1978, Ronald Reagan was already mapping out his presidential campaign for 1980. While Reagan’s beatification among conservatives can get a little rich, the fact remains that there’s not a single potential candidate for 2012 who even approaches the 40th president’s magnetism.

A smart strategist would’ve already gathered the leaders of the GOP—the elected officials, fundraisers, pollsters and consultants—and explained that the word “repeal” has negative, sour grapes connotations and isn’t likely to sit well with the independent voters who voted for Obama but are now up for grabs. Similarly, the phrase “ObamaCare” is snappy shorthand for pundits and editorial writers, but for the public at large it seems like a nasty slap at a President who remains personally popular.
Nearly every politician, save those who are either grandstanding or just naïve, understands that Obama’s healthcare bill won’t be repealed; already many of its virulent opponents are figuring out how to adapt to the new rules. In addition, it makes little sense for Republican hopefuls to base their candidacy solely around the issue of healthcare; the confusion over the legislation won’t recede by the fall and will be a pressing topic raised by voters, giving candidates an opening of how they intend to “repair” (a far more palatable word than “repeal”) healthcare.

Foreign policy is unlikely to enthuse anxious voters in November, and in any case, Republicans and Independents don’t really have a beef with Obama’s Afghanistan strategy, except at the margins. I agree with Kristol that Obama’s increasingly hostile stance towards Israel is appalling, but again, that’s an issue that won’t gain much traction.

Republicans have to hammer Obama and the Democratic-controlled Congress on the economy and the continued bleak unemployment figures. It matters less and less that the protracted recession began on George Bush’s (who?) watch; anyone who’s lost their job or is fearful of keeping it, doesn’t look to the past but wants to know who’s going to help him out. Republicans this past decade haven’t adhered to the party’s traditional principles of limited federal spending, coupled with tax incentives for small businesses and entrepreneurs, but they’ve now got a clean slate, and can offer detailed plans for fiscal sure-footedness.
Last week, in The Wall Street Journal’s subscription-only “Political Diary,” Stephen Moore wrote briefly about a potential windfall for the Republicans now germinating in Florida. Before that state’s legislature is the “Teacher Tenure Bill” (already passed by the state senate, and expected to pass in the house and then signed by Gov. Charlie Crist), which would effectively end tenure for teachers in public school districts by allowing them only one-year contracts. It’s no surprise that the bold, and necessary, proposal has left Florida’s teacher’s union apoplectic and badly rattled. Moore writes: “Other features in the package would link teacher pay to student test scores and expand by $22 million a scholarship program that students can use to pay tuition at private schools. If enacted, the package would represent the biggest victory against teachers’ unions in years and make Florida overnight America’s leader in education reform.”

Even with that robust report, it’s possible, should this bill become law in Florida, that Moore has understated its significance. Next to the economy, nothing disgusts Republicans and a large number of Independent voters than the wretched conditions of public schools. As such, it’s a tailor-made issue for Republican candidates (at both the state and national levels), who will point to Florida and promise to work for similar reform in their own states.

This uncomplicated trio of issues—the economy, teacher accountability and healthcare “repair”—would give Republicans this November a proactive alternative to the tax & spend, nanny-state platform of their Democratic opponents. All that’s missing is either a national leader, or a cabal of get-their-hands-dirty organizers, to maximize voter enthusiasm for a reversal of the Democratic gains in the past two election cycles.