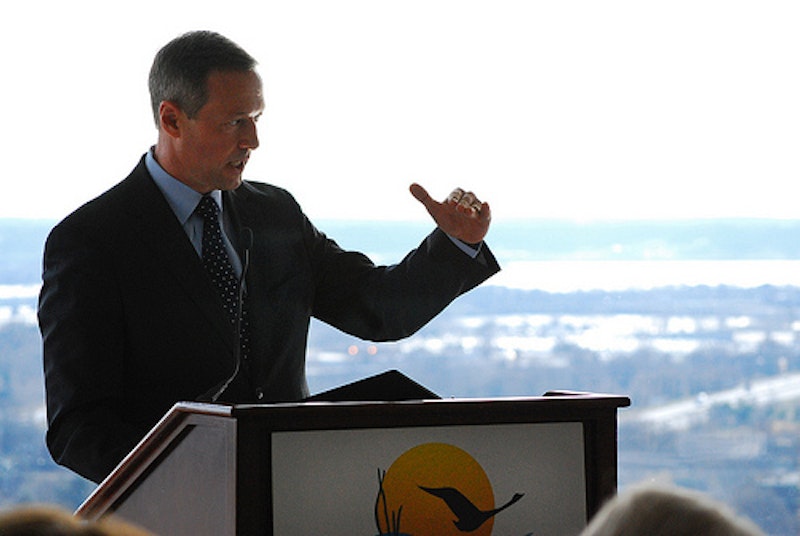 They’re four years older now, a couple of mid-life dudes who are correspondingly wiser, but they remain, nonetheless, the Alpha males of Maryland’s political parties, an engaging though muscular rock star and an amiable former linebacker jock who still wears his oversized college ring.

Again, the reprise of the dream match-up that political hobbyists have been itching to see since the last smack-down in 2006, Gov. Martin O’Malley (D) and Robert L. Ehrlich Jr. (R), tangling in America’s last legal blood sport, a campaign. O’Malley is the weightlifter, jock, hunk, part Elvis, and Ehrlich’s the jock, hunk, linebacker who probably couldn’t carry a tune in a bushel basket. And each has four years on his resume as governor, for better or worse, which is the fulcrum on which this election will turn.

And oh, they know each other all right, and, as will become deliciously obvious, they really don’t like each other. But they are remarkably similar in many ways, just as their differences set them apart in the political realm. They are, and there’s really no other way to put it, two studs.

O’Malley and Ehrlich both exude sex appeal, spoofed on Seinfeld as kavorka—the lure of the animal. They are the two poster boys for Maryland’s dominant political parties in the second consecutive Maryland election that hoists the banner of sex symbol politics. More than a political campaign, it resembles a re-run of the cult movie This is Spinal Tap.

“I long since decided that if the candidate doesn’t have some Elvis to him, he ain’t gonna make it,” observed the late political columnist Molly Ivins.

The major scene-setter between 2006 and now is the unforgiving anger of the electorate, with 16 million jobless and another estimated six million who’ve given up and dropped out, a health care reform plan that for the most part they don’t like and don’t understand and a backstage crew of professional mischief-makers egging them on. For this outing they call themselves the “tea-partiers,” but largely their make-up is the same collection of squeaky wheels and flush-faced complainers that hoot and holler from election to election and are encouraged by the entropic wails of talk radio’s yammering know-nothings. Much of the bitterness is based on race. Otherwise, they seem to be demonstrating against their own best interests. With all that’s going on with Wall Street and the economy, you’d think they’d want more government intervention, not less.

It is in this mood of national ugliness and civic boorishness that Ehrlich sees his opening for a return engagement as governor. Yet the heartland sentiment expressed by the tea-baggers does not appear to have gained traction or a voice in Maryland, even among the state’s visibly outnumbered Republicans. Even Ehrlich himself used his radio show on WBAL to encourage demonstrators during a January rally at the State House where he sat on the sidelines as kind of a benign populist, smiling approvingly during the shout-out but without lending a supporting voice.

There’s a real sense of concern about the direction our state is taking,” The Sun quoted Ehrlich as saying during a conference call with reporters. His campaign, he said, would be “about new ideas and proven leadership in Annapolis.” He announces his candidacy this week at dual appearances in Rockville and Arbutus. After ruminating about a comeback for more than a year, Ehrlich was finally emboldened by Republican victories in Massachusetts, Virginia and New Jersey, which are being metered by Republicans as a referendum on Democratic policies but in each case was decided strictly on local issues.

Another major distinction between 2006 and 2010 is the explosion of social media and all of its manifestations and mutations that were largely non-existent four years ago. Today the basic Internet such as e-mail is considered quaint and obsolete. A candidate (or his communications director) not only must define the message; the trick today is to tailor messages to fractured audiences on an endless menu of media streams. Warning: Sending conflicting messages to competing audiences may be hazardous to a candidate’s health.

Students of human motivation understand, too, that Erhlich vs. O’Malley is more of a grudge match than it is an adventure based on any principle or higher calling. Ehrlich was bitter over his loss, but some say not as angry as his wife, Kendall. He entered campaign 2006 with a 55 percent favorability rating and a five point lead in the polls and nonetheless lost. But the one factor that polls can’t measure is organization, and that is where O’Malley excels. And it helps to have a two-one-registration advantage with a solid grip on the populous I-95 corridor, the heart of the state’s Democratic party.

For Maryland Republicans, the good news is that Ehrlich’s running, and the bad news is that Ehrlich’s running. It speaks to the narrow and shallow talent pool of the party that its only marquee candidate is a rejected governor. And it also raises the question of who Ehrlich can or will recruit as a running-mate for lieutenant governor because of the shortage of GOP talent. His last two choices, in 2002 and 2006—Michael Steele and Kristen Cox—were totally undistinguished and added little cachet to the GOP ticket.

Ehrlich’s ability to vacuum money as an outsider will also be tested. In 2006, as governor, he out-raised O’Malley $18 million to $16 million. Ehrlich is counting on his popularity and visibility to offset any shortcoming in fundraising, however, even though his goal this time around is said to be in the range of $10-$12 million. O’Malley has $6 million in the bank already compared with Ehrlich’s $142,000.

Comparisons suck, to roughly paraphrase Shakespeare. But here goes anyway. O’Malley is a gifted and captivating speaker, often ad-libbing eloquently, working his rhetorical mojo on many a diverse group or room. He occasionally falters, though, when he attempts to fake sincerity. And there are those who view O’Malley as arrogant. In 2006, his shtick was “kitchen table” talks or neighborhood chats with the K-Mart crowd and union hall folks.

Ehrlich’s oratory, less soaring, contains the chipped edge of Arbutus and a down-home resonance that’s very effective in campaign and political settings. Put another way, both have the gift of connectivity, the very quiddity of any successful politician.

As the incumbent governor, O’Malley has had no difficulty maintaining visibility. He is a frequent presence at the White House and on the national stage. He is vice chairman of the Democratic Governors’ Association and was chairman of its fund-raising committee whose function is to elect Democratic governors. To be sure, he’s hoping they’ll return the favor.

Ehrlich, for his part, has sustained a presence with a talk radio show that he shares with his wife, and with frequent speaking engagements across the state. He heads the Baltimore office of a South Carolina law firm, Womble Carlyle Sandridge & Rice, where members of his former State House communications team are also employed and presumably will re-join his campaign after being kept standing on their tip-toes for four years.

So now O’Malley and Ehrlich are unfettered and free to tuck it to each other without the brooding presence of a man-in-the-middle wondering whether he’ll run. In 2006, they behaved like two dogs circling and sniffing, trying to decide whether to make love or war. For the most part the choice was war.

The rap on O’Malley is that at any unexpected moment he’s likely to flip a microchip. And the bad paper on Ehrlich is that he doesn’t give a fig about anything but winning.