Nike sues for blood money, coronavirus merch, and the memetic necessity of bringing Trump back to Twitter. 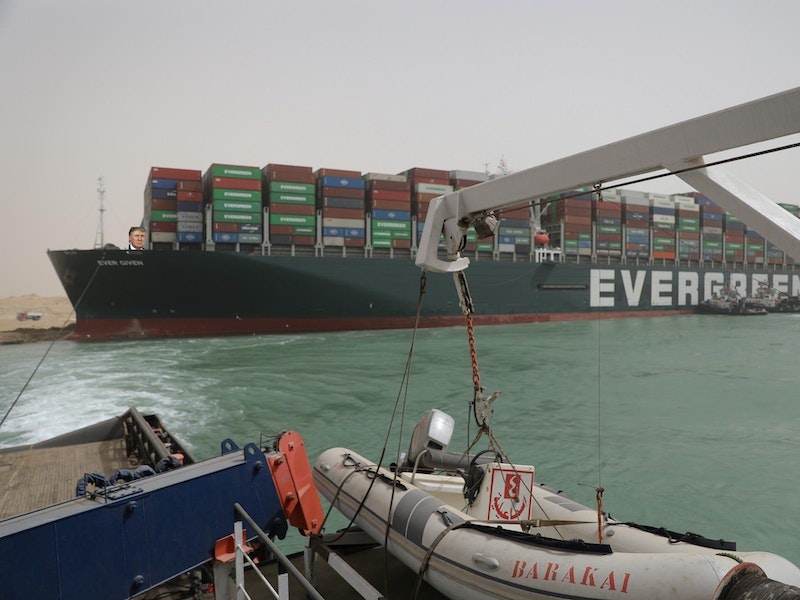 Pictured: The former President on the deck of the Evergreen, March 2021.

Lil Nas X made Nike unhappy. The global conglomerate is, per NBC, “having a sad.” More specifically, they’re suing the hip-hop artist for selling his own sneakers infused with human blood. “Satan Shoes,” with only 666 pairs produced, sold out immediately, and now Nike has come to collect: “The sneakers are modified Nike Air Max 97s—decorated with a pentagram pendant and a reference to Luke 10:18, a Bible verse about Satan's fall from heaven.” Cool shit so far—what’s the problem? Qualm? The article continues: “MSCHF, a company known for creating controversial and viral products, confirmed Sunday that the shoes contained a drop of human blood inside the sole, drawn from members of the MSCHF team.”

One drop? That’s not worth suing over. Lil Nas X is a new artist, with only one bona fide hit. “Old Town Road” might end up being the last “song of the summer,” if one still takes stock in COVID-era DRUDGE. I heard he was “paid off” to make an about face last year and slam Trump constantly, and since it coincided with the 45th President’s horrendous handling of the of the pandemic, Drudge was able to keep his abrupt turn seem less obvious. It was a change in line with his previous decades of work, but when he started blowing Joe Biden every day, I threw up my hands. Where to turn for real shit?

A headline from Monday night: “NEW VACCINES ‘WILL BE NEEDED IN YEAR.’” Our temporary respite from disease panic is a product of the relative comforts I wrote about last week, relatively warm weather, and relatively encouraging news from those who have gotten “the vaccine.” Never mind that there are at least three major vaccines deployed right now, all listed in an obscene t-shirt, white Helvetica on black: “Johnson & Johnson, Pfizer, and Moderna.”

Experimental Jetset, a Dutch graphic design company, has made those “ampersand” shirts since 2001, starting with the members of The Beatles. I first saw the design with the members of Public Enemy and assumed it was their design. It’s a look that’s become as ubiquitous as the Unknown Pleasures cover was a decade or five years ago, mostly used for band merchandise, sometimes for movie characters, pop culture figures, or, veering into the profane, politicians. I don’t have to spend much time on Google to find versions of the shirt featuring certain members of the Supreme Court, the Democratic Party establishment, or the members of “The Squad.” Now, along with Paul McCartney and AOC, you too can “stan” a pharmaceutical company—and not just one, but three!

No wonder the suicide rate’s up. Besides, anyone that buys tongue-in-cheek coronavirus merchandise, “ironically” or not, should probably be put into solitary confinement. I kid, because we’re all happy that Virginia outlawed the death penalty last week, and overjoyed about the warm weather, not yet surrounded by cicada carcasses and their mad shrieking, and if these vaccines hold, hey—people will be partying once again! They won’t need an excuse (like a global protest movement against police brutality) to go outside and get drunk with their friends. I kid, once again, because we love social justice. I’m not kidding!

One more qualm: I’m not happy that we’re back in “Balloon Boy” territory with memes. You may have heard about a boat in the Suez Canal. It got stuck. This should’ve been a fun one, but it wasn’t, the Suez “Boatstuck” was just as dumb and useless as Balloon Boy: a meme with nothing beyond its superficial silliness. I’ve gone on about the multi-layered meanings and resonances of “The Dress,” but even events like the killing of Harambe the Great Ape and Cecil the Lion in the mid-2010s had some sociopolitical significance or content. The boat in the Suez Canal, ironically, is an exaggerated, even crude, metaphor for the fragility of global capitalism, and some people did bring that up. Yet something was missing, a certain special ingredient… you knew him as a businessman, then as a television star, then as a presidential candidate, then as the 45th President of These United States… Mr. Donald Trump hasn’t had an opportunity to “weigh in” on the boat in the Suez Canal.

I understand why he was kicked off Twitter after January 6: still in office, still encouraging his supporters to distrust everyone but him, impeding a peaceful transfer of power. And now that he’s banned, fat chance he’ll ever get on there again, even with a burner account (wouldn’t you do just about anything to find Trump’s “alt”? Maybe he posts nudes—it’s 2021!). I don’t say this just to be provocative, because Trump’s constant presence in American life for the last four years brought the political aspects of everything out: if the boat got stuck in 2019, there would’ve been more substantive engagement with the event and the memes.

Under Trump, there would’ve been energy to go beyond simply laughing at the absurdity of the situation, and talk explicitly about how this is a demonstration of the extremely fraught distribution channels of our economic system. Trump likely would’ve made some very stupid (and very funny) tweets about the boat—“JUST RAM IT WITH A BIGGER BOAT! COME ON!”—and people would’ve thought about the Suez Canal more. Whether or not they would’ve done anything past that if another question, but now, we’re in a pre-political meme-land, just like in October 2009 when Balloon Boy “gripped the nation.”

This is what the “great tune-out” looks like. Now that so many people have “gone back to brunch,” figuratively or literally, they’re interacting with material in a pre-Trump mode: with eyes wide shut, unwilling or unable to see past the surface. We need a heel figure like Trump to be used as a reflector to maintain a certain level of political awareness and consciousness. It’s not good that a single boat getting stuck almost disrupted the world’s toilet paper supply. Maybe if Trump could still roast people, policies, and objects on Twitter, people would still act and carry themselves with the political consciousness and weight they always should. Bring Trump back! The left needs him. Qualm?