Will Smith shows both “cancel culture” and “honor culture” lead to violence. 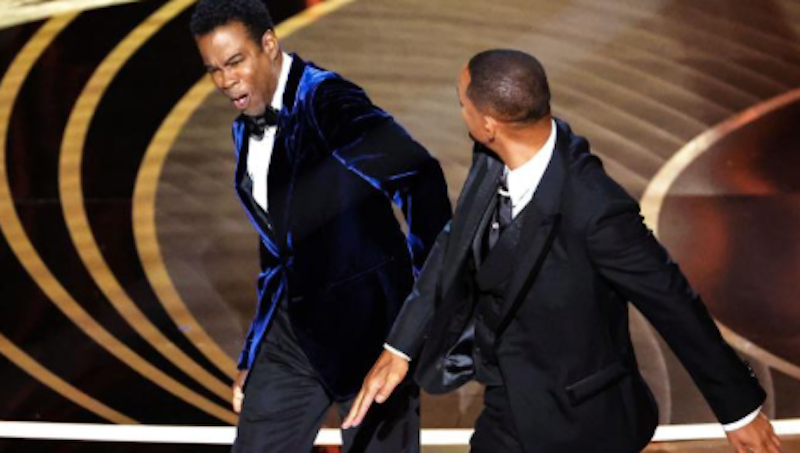 The best way to avoid violence breaking out amidst endless, insoluble debates over who has given offense when—and which tribe or gender hasn’t gotten its due—is to treat as ironclad the rule against initiating violence (using someone else’s body or property without their permission).

There shouldn’t be a need to, say, tote up all the grievances of American blacks against American whites or vice versa in order to determine whether it was wrong to shoot Martin Luther King because murder is obviously out of bounds, if you accept the ironclad rule I’ve stated. And if a comedian’s physically attacked by another comedian, as with Chris Rock slapped by Will Smith, the ensuing debate shouldn’t be about how offensive the attacked comedian was, whether baldness is an apt subject of mockery, or whether the slapper was more concerned about his wife, her lovers, or himself.

Both the left and the right have trouble grasping that basic rule because each faction (unlike consistent hardcore libertarians) is basically a factory for producing excuses to violate the rule. Worse, one can further break each of those factions down into two subsidiary factions, with all four groups—left, liberal, conservative, right-wing—defined largely by their excuses for barbaric violations of the libertarian anti-violence ground rule.

You could see this cross-spectrum coalition of the barbarous in the way that a surprising array of people made partial excuses for Smith’s slap. To some on the left, Rock’s joke about Smith’s wife’s baldness was too patriarchal. To some liberals, it was unfashionable “body-shaming” typical of run-amok comedians whose insensitivity needs reining in. Many a conservative has also long thought comedians today are too coarse and deserve something akin to a slap. And the newer, more macho far-right seems delighted any time a dispute, especially over a woman, is settled with old-fashioned, ostensibly manly fisticuffs.

All of those people are barbarians—and fortunately, many people within each of those factions disagree with them. However, the Smith/Rock incident is a reminder, coming as it does after a few years of debate over whether to censor insensitive comedians, that both left-leaning “cancel culture” (punish offensive people!) and right-leaning “honor culture” (physical combat such as dueling is the way to expunge insults to reputation!) are potential inspirations for violence and should be viewed with great skepticism.

That doesn’t mean these two “cultures” are by definition violence—to take that damning a view of them would be no better than calling jokes violence, which would be to repeat the cultures’ own censorious errors—but just as extremist religious views can rightly be looked upon as potential sources of violence, so too can the spectrum-spanning array of political excuses for treating words as morally interchangeable with slaps, punches, fines, firebombs, samurai swords, eggings, fatal drops from helicopters, or guillotines. Use your words.

As for how Will Smith managed to become so detached from reality and potential consequences that he thought a very public slapping was appropriate, we can probably blame not only the left and right cultures described above, Smith’s childhood with a violent dad, the resolute inability of a mostly-white-liberal audience to perceive black male violence even if it’s right in front of them or involves buildings burning down, and a celebrity sense of entitlement but also the general theatrical unreality of being a celebrity—and rapper, you’ll recall—with a long history of consequence-free slapping.

Weirder still, I can’t help wondering if Smith watched the rather conservative first episode of the new crime drama TV series Reacher, which features a moment in which a Harvardian black male nerd who’s depicted as ineffectual finally snaps and yells at the hulking white prole protagonist, “You get my wife’s name out of your damn mouth!” Does life imitate art, especially among impressionable and unstable artists?

Life can imitate art if it likes, but it shouldn’t imitate violence. Beware blurring the line, then, between art and violence. The former can be pleasing, shocking, offensive, insightful, controversial, crowd-pleasing, or stupid, but the latter should be nothing at all. Civilization has room for gentlemen, bald ladies, wiseasses, scolds, and even the humorless, but the initiation of violence is out of line.