Notes From The Field: HIV/AIDS Denialists

They'd be less cowardly if they didn't beat around the bush. 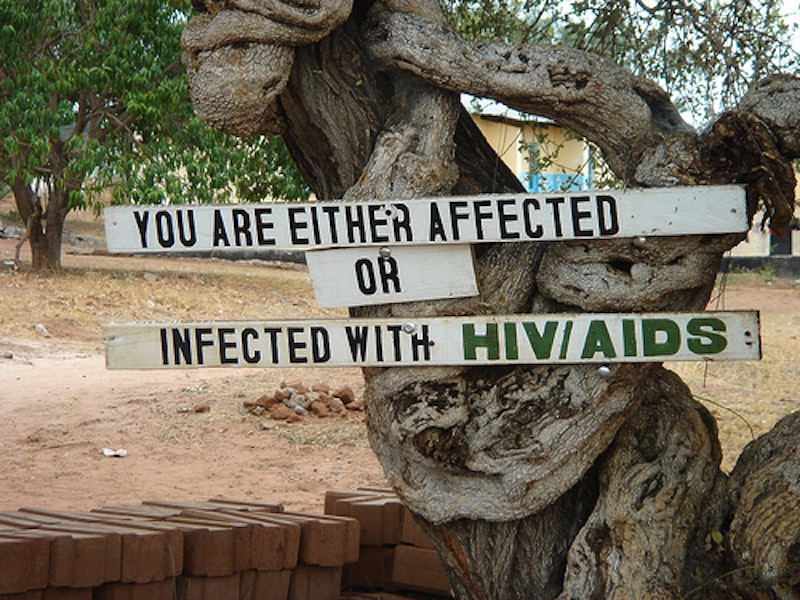 I'm not even sure why I'm writing this. There are surely about 17,000 better ways I could spend a Thursday night than debunking a poorly-written article that denies HIV causes AIDS. I mean, for Christ's sake, 30 Rock is on, and here I am Googling things like "HIV isolation" and "Koch's Postulates."

I suppose I should start by stating, for the record, I am not a doctor. Nor am I a medical researcher. Nor did I take more than two science classes in my four years at college. But I did make it most of the way through Species IV: The Awakening, so I've got that going for me.

Anyway, David Crowe's "The Potemkin Village of Essex and Chigwedere" is the poorly-written article I'm talking about, published a few days ago on Celia Farber's website, The Truth Barrier. I'd say David Crowe is a … well, actually I don't know what I'd say about Crowe because I don't know who the hell he is. And I don't know who the hell Crowe is because in "The Potemkin Village" Crowe doesn't say things like, "As a respected virologist at the National Institute of Health … " or, "During my years spent studying communicable disease in Africa … " or, "Back when I was a janitor at MIT secretly solving complex math problems …" Nor is there one of those helpful bylines at the end of the article telling me, for example, what kind of familiarity Crowe may have with the topic of HIV and AIDS. And really, in an article where you're accusing pretty much the whole scientific establishment of orchestrating an elaborate conspiracy "that is destroying lives through the pronouncement of death sentences, the use of toxic drugs, and the demonization of gay men, Africans and the association of sex with terror, shame and death," shouldn't you have a credit line?

And yet I'm sure that Crowe is some kind of scholar, because in the concluding paragraph of "The Potemkin Village" he makes a point to talk about his careful methodology:

I have to emphasize that my method of analyzing this paper was to first read it and to highlight the major claims. I then started over again and examined each highlighted item. I have only got to my marks on page 2, leaving four more pages.

Wow. Must be a Princeton man.

I won't go into all the specific errors Crowe makes, and all the lies about HIV he perpetuates, because way more qualified (read: medical degree holding) bloggers have already done that. I don't know how Crowe thinks he can get away with saying, for example, "HIV has never been purified," when he knows someone like JT Deshong at Dissidents@Dumbees is gonna come right back with 10 specific examples proving him completely wrong. As Deshong writes:

If one were to go to PubMed and search for “HIV Isolation” one would get over 18 thousand published articles. “HIV Purification” gives just shy of 17,000 articles.

The articles date back to 1984 (when it was still called HTLVIII) and come from scientists all over the world.

The articles demonstrate that HIV has been isolated from every fluid imaginable from tears, to synovial fluid, to menses to bronchial lavage.

The articles demonstrate that the people HIV has been isolated from are whites, Africans Asians and Europeans.

Then of course there's Crowe's questionable statistics on South Africa:

But [Essex and Chigwedere's] self-reference is based on a mathematical model under the control of the authors (and mathematical models do tend to validate the prejudices of their designers) and flies in the face of a rapidly increasing population in South Africa, small numbers of AIDS deaths documented by Statistics South Africa and a major confounding factor—a rapid improvement in the reporting of black deaths since the fall of apartheid which has produced the illusion of a rapidly increasing death rate.

Really? I can't find anything that supports that claim on the Statistics South Africa Website (and of course Crowe doesn't include a citation, because I guess that would be too easy or something). When I do search through Statistics South Africa for things like "AIDS South Africa," all I find are articles like this one (pdf) by James Ntozi of the Institute of Statistics and Applied Economics at Makerere University in Uganda entitled "Impact of HIV/AIDS on Development in Sub-Saharan Africa," the first lines of which read: "Sub-Saharan Africa has experienced HIV/AIDS pandemic for over a quarter century. The pandemic has devastated the continent’s development in many ways."

Or there's Crowe's mention of three laboratory workers accidently infected with "a pure, molecularly cloned strain of HIV" as reported by William Blattner at a 1993 AIDS conference. Crowe writes:

The clone might have been pure, but where did it come from? Not from pure virus because there has never been any.  Despite the seminal importance of these three cases they have never been reported in any detail in any journal, peer-reviewed or not.

Again, really? Because it took me all of about 20 seconds to find this report (pdf), in part written by the same William Blattner, and published in the February 1997 issue of the Journal of Clinical Investigation. And I quote: "The subjects of this study were three laboratory workers (LWF, LWR, and LWS) who were accidentally infected with the IIIB strain of HIV-1. At the time of infection, all three laboratory workers were working in facilities engaged in preparation of highly concentrated HIV-1."

But what really strikes me as pathetic about "The Potemkin Village" (and I guess the reason I'm writing about it instead of watching 30 Rock) is the way Crowe sets his article up as nothing more than a defense of a brave research scientist, Dr. Peter Duesberg, who was unfairly crucified for his work (his work being to suggest that HIV does not cause AIDS):

The Chigwedere and Essex paper would be described by most people as “scientific” but, despite this, the emotional term “denialist” is used throughout. They call Dr. Peter Duesberg of UC Berkeley, “the most well known AIDS Denialist,” for example.

The motivation for them is an earlier paper by Duesberg and others that was published on the website of the journal Medical Hypotheses in anticipation of printing but then quickly withdrawn after AIDS drug pushers leaned on the publishers who overrode the journal editor and pulled it (even threatening to close the journal’s doors) [Duesberg, 2009]. Chigwedere and Essex are here seen cursing at the graveside of their enemy while knowing that his body has been thrown to the wolves so dangerous is he even in death. But the grave, the PubMed entry, cannot be removed or their hatred would have no focus and their victory would have no trophy.

But of course Duesberg and the Chigwedere and Essex paper aren't really the point, are they? The HIV/AIDS conspiracy is the point, and as Crowe says of Seth Kalichman, the editor for AIDS and Behavior, the journal that published the Chigwedere and Essex paper: "Kalichman has good connections among South African AIDS treatment activists and is paid by the US government to infiltrate ‘denialists,’ even using the false name Joseph Newton (since his cover was blown he may be using other names—beware)." Presumably every AIDS researcher since the early 80s has been taking a cut, paid off by drug companies who manufactured not only an illness but also a treatment. Somewhere, Crowe thinks, there's a drug company CEO laughing maniacally and throwing piles of money into the air.

If Crowe had said just that, I wouldn't think he was such a coward.