Non-Evasive, for a Change

The media debate about Obama's race speech misses the greater point: For once, a politician addressed a serious issue head-on. 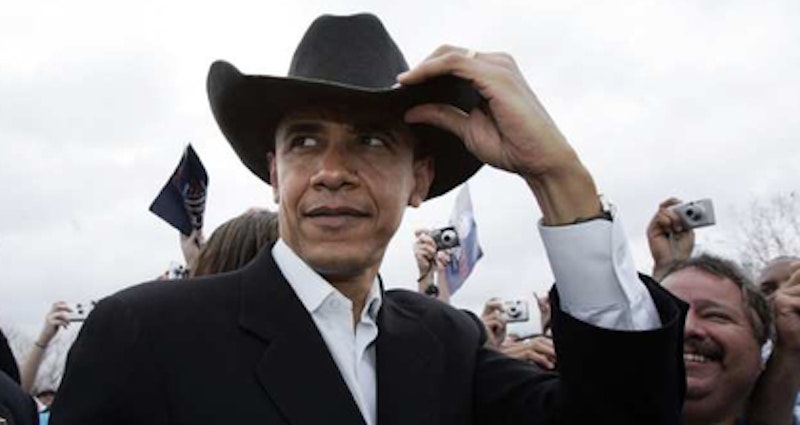 Barack Obama’s got a problem with his preacher, in case you haven’t heard. The man who presided over his marriage, Rev. Jeremiah Wright, has made some astonishing statements, the content of which poses problems for a leading presidential candidate. Highlights include a) the government created HIV to keep the black population down, b) the U.S. got what it deserved on 9/11, and c) God himself should damn this country for its long history of racism.

A major campaign controversy, Obama’s worst to date, surrounding these statements flared up two weeks ago when national media organizations uncovered video clips of Rev. Wright spouting that nonsense. But it was hardly fresh news. These sermons had been in the public record for years, even available for sale on DVD, and Obama has been slowly distancing himself from Wright ever since he announced his candidacy. Newspaper stories from last year documented Wright’s inflammatory nature and Obama’s concerns about how closely he was associated with him. Yet only this month has Wright become a problem that’s hurting Obama in any number of polls.

Something obviously changed recently to spark this cycle of negative coverage. Two things immediately come to mind. One, the medium is the message. An enterprising reporter or rival campaign operative thought that this was an opportune moment to release neatly edited video of Wright’s worst moments. In today’s media environment a 10 second clip of Rev. Wright saying “God damn America” in his angry preacher cadence is going to get far more eyeballs than an article in the middle pages of a newspaper. It plays well because it’s easy to digest.

Two, race and racial difference has metastasized into an effective, if nasty, campaign issue. Hillary Clinton’s campaign has, none too subtly, engaged in race baiting ever since Obama became a serious challenger. She wants race to be an issue because it attracts Hispanics and non-college educated whites, boxes in Obama’s expansive identity claims, and undermines his call for historic change. It plants the campaign firmly in the mud of the past, the only space where she’s still got a fighting chance. Race also feeds the insatiable appetite of the media during this extended layoff between major primaries.

A week ago Obama gave his best counterpunch. He delivered an informed and eloquent speech in which he clearly disowned Rev. Wright’s comments, while also placing them within the historical context of race relations and racial identity in America. (Read it here.) Reactions to the speech have been mixed and he hasn’t been able to slow a slight slide in the polls. It may not have been enough to get momentum back on his side, but it did reveal something important about his character as a leader, something that’s been buried in the rush of reporters and columnists looking to stake their own claim on the sexy issue of Race in America.

Obama showed us that he’s the kind of person who’s willing to publicly confront serious problems in an intelligent way, a rare characteristic for a presidential contender. Predicting presidential behavior based on the bleating and constant tactical shifting of a campaign is a difficult task, but not as worthless as you might think. True, candidates routinely fudge on promises when faced with the realities of actual governing. It’s foolish to read anything more than a general philosophical outlook into policy bullets printed on pamphlets months before a person becomes president. But while the specifics of what a candidate will do as president have proven to be beyond the scope of most crystal balls, insights into the how of a candidate’s presidency are easier to come by.

George W. Bush’s special combination of smarmy smirks and awkward stammering in 2000 foreshadowed an administration that set historical lows for deftness and intellectual nuance. Bill Clinton’s lawyerly equivocating on his extra-marital adventures first graced the national stage during his 1992 run, when the public was given cloudy evasions about Gennifer Flowers that he would stick with for six years, until forced to testify under oath during the Lewinsky scandal. Clear evidence of their character as leaders was visible during both the Bush and Clinton campaigns, evidence revealed during extended exposure to the glare of public scrutiny.

In 2008 that glare has only gotten more intense. A campaign as long and as media saturated as this one is going to result in bad moments for every leading candidate. (Just last week John McCain, flaunting his foreign policy platform on a jaunt to the Mideast, mixed up the Sunni and Shiite groups in Iraq.) The media, as well as opposing campaigns, eagerly distort and devour incriminating sound bites like Rev. Wright’s sermons to suit their own purposes.

Under that kind of constant inspection the way candidates respond to inconsistencies and missteps might not reveal their souls, but it can give us some idea of how they’ll treat the public as President. They might treat us with the befuddled condescension of a trust fund frat boy, or they might debase their own obvious intelligence by asking us what the definition of is is before admitting to lying about a blow job.

Barack Obama confronted his problem, straight up. When a serious issue evolved that threatened his campaign, he carefully thought about it for a few days and delivered a powerful speech that caused the editorial pages of the country to erupt for a week in spirited debate about the meaning of race and the legacy of slavery. Step back for a moment and think about how exceptional this really is. A leading politician decided not to distract us with whatever media spin his consultants cooked up. Instead he expanded the boundaries of the public dialogue and didn't treat us like complete idiots. Yet he’s the one taking a hit in the media.

Hillary Clinton, meanwhile, treats the American people like children and has, at least temporarily, regained some momentum. The skeletons in her closet are too numerous to mention, but one that attracted a middling amount of attention—at least until the Rev. Wright controversy blew up—is the release of her tax returns. Leading candidates for president release their tax returns to the general public. It seems pretty basic: let us see where your income comes from before we decide to trust you with the veto pen. It shouldn’t be a big deal if you’ve got nothing to hide. Obama’s already done it.

Clinton, though, has not released her taxes (nor has McCain). This is vitally important considering that she loaned her own campaign $5 million, and that Bill has made loads of shady money since leaving office as the least affluent former president in modern times. Tim “Gotcha” Russert asked her about this in very clear terms during a debate. Her response? “I will release my tax returns. I have consistently said I will do that once I become the nominee, or even earlier…I have been as open as I can be…I’m a little busy right now…I will certainly work towards releasing.” (See the full video here.)

This is crisis management 101 in classic modern politicking. Step 1: Knowing nod and plastic smile while dialing up a prepared response. Step 2: A distracting positive statement that’s tangentially related (in this case information about how many donations are coming in). Step 3: Present an answer as a moving target while using the terminology of the question to make it seem like you’re engaging the issue directly.

The end result is that, while she embarrasses herself to anyone paying attention, she doesn’t provide enough fodder for an easily digestible story. She doesn’t let commentators pontificate over cool topics like race. And she doesn’t let any easy headlines get written about her or let any 10-second video clips fly around the Internet. It’s manipulative, sure, but when the campaign is reduced to an exchange of flashy accusations, as it is now, she’s effective.

Clinton muddles and dodges and always looks composed. Obama, God forbid, sometimes actually looks uncomfortable talking about a sticky subject. He doesn’t have a ready answer to everything on hand, but with some time he will come back with a thoughtful response that doesn’t duck away from an issue. You may want Obama to completely reject Rev. Wright. You may understand his arguments about context and history. You may, like me, think it doesn’t really matter. But he deserves respect for not responding with a bunch of dismissive half-truths.

It’s hard to say whether that will be enough to hold off Clinton. The Obama campaign has to hope that over the long term his reflective forthrightness will prove more durable. Nobody knows how much voters will appreciate a politician who stands up and thoughtfully confronts serious problems, even if those problems might be personally damaging. But one thing is clear even now: that kind of character has been rare at 1600 Pennsylvania Avenue.