Nobody's Fault But Her Own

Hillary's on her last legs, and she has only herself to blame. 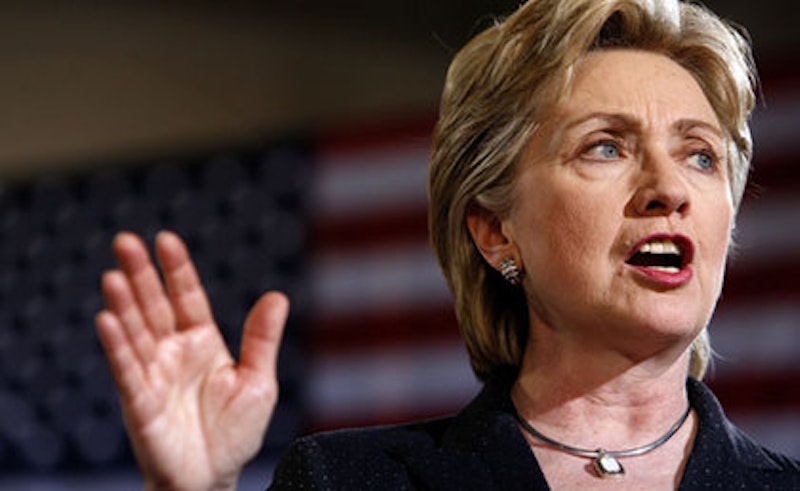 Sen. Hillary Clinton’s presidential campaign has failed. What once was the biggest and confident team in primary history has been reduced to a bitter, limping joke. Even while Clinton pledges to hobble along for an indefinite period of time, there is no denying that the majority of the contests have demonstrated a thorough rejection of her candidacy. More political autopsies will be written and campaign epitaphs inscribed, grappling to make sense of how this entitled icon blew it. Most analysis will be wrong.

Clinton is not losing, as a common rationalization holds, because of a media bias. Only Clinton would be considered a serious candidate after losing 11 straight contests in February. And she, unlike Sen. Barack Obama, does not have to answer to blowhard cable anchors and panelists questioning her religion and patriotism with each week’s new smear. (Granted, Obama was afforded positive, sometimes reverential, coverage for most of the past year, but the current scrutiny of his candidacy has been particularly vitriolic.)

Clinton is not losing because she is a woman. In fact her candidacy likely would have ended after New Hampshire had so many women not rallied in sympathetic solidarity. She is not losing, as some of her advisers comically argue, because of money. A candidate who raised $107 million in 2007 cannot claim poverty.

And she is not losing because her opponent is Obama. Remember that John Edwards, under-funded and largely ignored, still managed to beat Clinton in Iowa. No doubt he would have done even better without Obama splitting the “change” vote. The reason Hillary Clinton will ultimately fail to be the Democratic nominee is that she ultimately failed to be a Democrat.

Her vote to authorize the Iraq War was, from the moment she cast it, an immediate impediment to her ’08 prospects. That cowardly act demonstrated that pandering is more important than principle, that calculation trumps conviction. Clinton was complicit in one of the greatest blunders in the history of American foreign policy. And instead of apologizing for the vote, she granted President Bush a similar excuse to launch another war against Iran. That does not suggest readiness to be president on day one or day 100.

Hillary Clinton will lose because her top advisers include Mark Penn and Terry McAuliffe, professionals at selling out. Bankrolling a campaign with corporate cash is not a winning strategy. When Democrats are addicted to donations from the financial elite, they start voting for mean-spirited bankruptcy bills, and then they get caught saying they are glad the bill they supported for didn’t pass.

A top-down campaign, heavy on endorsements from elected officials and light on grassroots energy, never deserved to win. Such rigidity can only aspire to the slimmest electoral plurality, and it will only contest the same half-dozen swing states in the general election. A winning candidate excites support in every corner of the country, creating a people-powered movement with the potential to enforce a true progressive mandate.

Finally, Clinton will lose because of what she was willing to do to win. Cheap stunts, like criticizing Obama’s alleged kindergarten ambition, turned voters off. Attacking hope and inspiration turned more voters off. Desperation got disgusting. Bill Clinton’s unbelievable racial innuendo in South Carolina shocked crowds of potential supporters into Obama’s camp. The campaign’s stated path to the nomination—breaking party rules by seating uncontested Michigan and Florida delegates, and convincing super delegates to overturn the popular vote—may earn it a Medal of Freedom from President Bush. But it sure wasn’t going to win the Democratic presidential nomination.

Jacob Shelly is a student at American University.