Massachusetts, not Mormonism, is Mitt's problem. 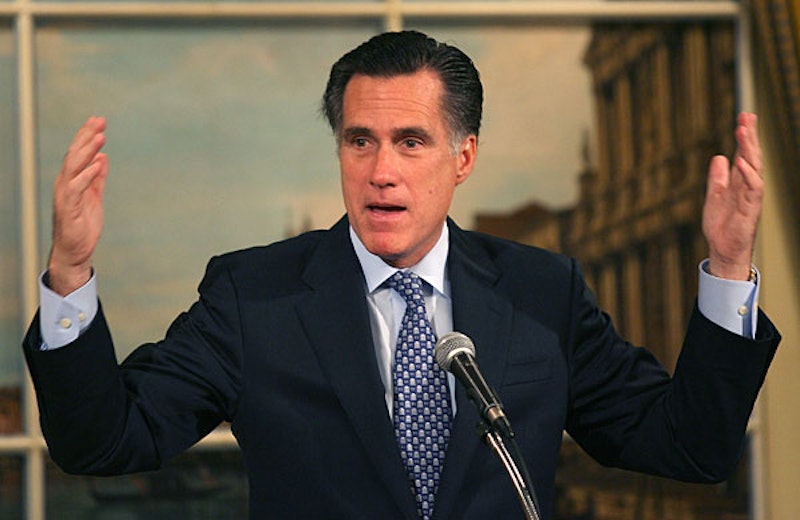 Mitt Romney is looking like the man to beat for the 2012 Republican presidential nomination. The former Massachusetts governor has history on his side: Ronald Reagan, George H.W. Bush, Bob Dole, and John McCain won the GOP nod after finishing second in the party's last round of competitive primaries.

Romney also benefits from the fact that the candidates who perform best against him in national polls—former Alaska Gov. Sarah Palin, ex-House Speaker Newt Gingrich, and erstwhile Arkansas Gov. Mike Huckabee -- are by no means a lock to run. And Romney positively clobbers other Republicans taking a look at the race, such as unknown Minnesota Gov. Tim Pawlenty.

But Romney seemed to have a realistic path to the nomination in 2008, only to be upended by Huckabee. Huckabee's strong support from social conservatives cost Romney the Iowa caucuses and any momentum heading into New Hampshire. He also prevented Romney from building the base in the South he would need to run a successful campaign from John McCain's right.

At the time, many people attributed Huckabee's rise and Romney's fall to the "Mormon problem"—many evangelicals had deep misgivings about supporting a Mormon candidate and felt more comfortable with a Southern Baptist preacher. This possibility can't be dismissed, given polls showing that more than half of evangelicals to some extent share these concerns.

Another possibility must also be considered, however; that Mitt Romney really suffered a Massachusetts problem. To win in a Democratic state, Romney has had to repeatedly take positions at variance with those favored by the national Republican electorate. Running for Senate in 1994, Romney promised the Log Cabin Club he would be a more effective advocate of gay rights than Democratic incumbent Ted Kennedy. After receiving an endorsement from Massachusetts Citizens for Life, Romney adviser Charlie Manning offered this remarkable explanation: "[Kennedy] was pro-life before Roe v. Wade and now he's changed. Mitt has always been consistent in his pro-choice position and that's why the group respects him."

During his 2002 gubernatorial campaign, Romney vigorously denied accepting the group's backing. "I don't know about the endorsement of the Mass Citizens for Life," he indignantly told Democratic rival Shannon O'Brien in a televised debate. "I didn't seek it, I didn't ask for it… When you say I accepted, I didn't write them a letter and say, 'Thank you very much for your endorsement.'"

In the age of YouTube, Romney could not easily escape from his emphatic declarations of social liberalism—which were every bit as likely to repel evangelicals as the finer points of Mormon doctrine. Now Romney once again faces a Massachusetts problem: the commonwealth's health care reform law.

Key aspects of the Massachusetts law—dubbed "Romneycare" by detractors—are similar to the controversial federal legislation signed by President Barack Obama: the individual mandate, subsidies for the purchase of health insurance, and government-managed exchanges to match consumers with insurers. Jonathan Gruber, the MIT health care economist who advised both Romney and Obama, told The Wall Street Journal, "If any one person in the world deserves credit for where we are now, it's Mitt Romney... He designed the structure of the federal bill." White House political adviser David Axelrod said much the same thing: "We're just trying to give the rest of America the same opportunities that the people of Massachusetts have."

There's just one problem: Republicans nationally don't want what Massachusetts has and they are clamoring for the repeal of what Obama just gave them. Just like his flip-flop on abortion, Romney has tried to deal with this in various ways. Sometimes, he argues that there are important distinctions between his health care reform and Obama's. Other times, he makes a federalist argument. Still other times, Romney is willing to accept the president's pat on the back. "[Obama is] saying that I was the guy that came up with the idea for what he did," The New York Times quoted Romney as saying. "If ever again somewhere down the road I would be debating him, I would be happy to take credit for his accomplishment."

Romney's Republican primary opponents would no doubt be happy to see him take credit for this accomplishment too. Romney faces the same dilemma on health care reform that he once did on abortion and other social issues: He can run from his Bay State record and be distrusted or he can embrace his Massachusetts moderation and be despised.

Either way, the result could be defeat. For a Republican on the road to the White House, Massachusetts may be a dead end.