Everyone knows we have an illegal immigration problem in this country, but the most sensible solution is being ignored: guest workers are better than no workers. From The Wildcat. 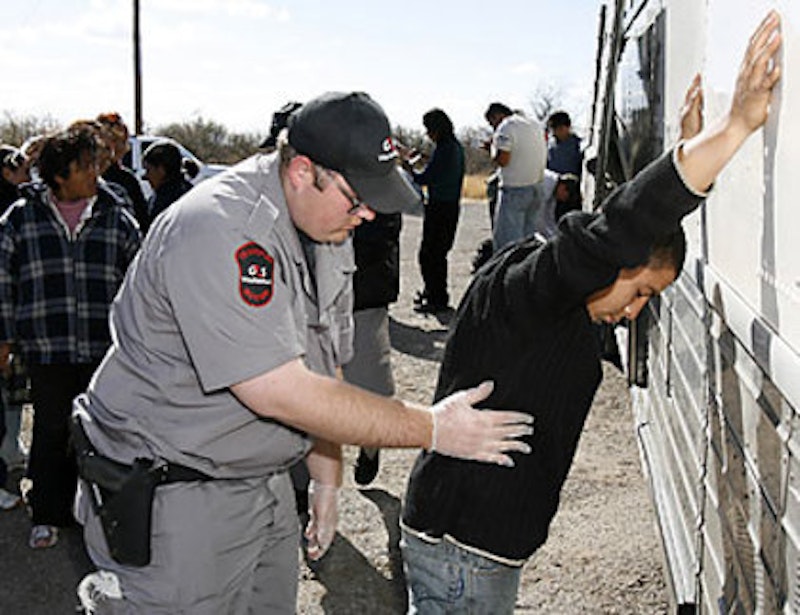 Even if Tom Tancredo and Duncan Hunter have taken their jingoist ads and faded back into obscurity, illegal immigration remains an important issue.

It is also a subject for which neither side has a good solution. The Republicans (with notable exceptions such as George W. Bush and John McCain) can barely keep themselves under control when it comes to immigration, quickly reverting to suggestions that the Rodriguezes are in cahoots with the Zarqawis. Meanwhile, the Democrats want to offer citizenship to thousands of undocumented workers, infuriating those abroad who have spent years navigating through stormy bureaucratic seas. Naturally, both sides agree that the status quo is unsustainable, just as they refuse to do anything to change it.

Yet out of the state where illegal immigration has a greater impact than any other has come a proposal with something that is all too rare: reasoned judgment. The Arizona state legislature is considering a bill in both the House and the Senate to allow the state to create its own guest-worker program. The bill, which has bipartisan support in both chambers, would allow approved businesses to register guest workers directly through the Arizona departments of labor and transportation, in conjunction with the federal government. By making the guest-worker initiative a state program, it would allow the state to avoid the bureaucracy that has damned federal guest-worker schemes, like H-2A certification.

The H-2A Certification was intended to be a national guest-worker program specifically geared towards agricultural needs; the complication of the program makes it unfeasible for most businesses, however, and today there are only 75,000 of these visas, far fewer than the number of agricultural workers needed.

But despite the failure of previous attempts at immigration reform, there is still wide contempt for the mere idea of a guest-worker program.

An editorial in The New Republic magazine decried a guest-worker program as part of an "unsavory tradition: the tradition of the African slave ship." This moral upstanding ignores the great moral issue of providing not only American businesses with a legal means by which to remain solvent, but the poor with a chance to improve their lot in life. Allusions to "slavery" ignore the fact that not only are these programs entirely voluntary, but they are popular among the supposed "slaves." To take away an opportunity for poor foreigners to work relatively high paying jobs in occupations where American citizens are hardly engaged would in fact be the least moral option of all.

The pragmatic argument against this particular proposal is simply that the state does not have the constitutional authority to enact treaties with foreign countries without the federal government's permission. Such a proposal clearly violates Article I, Section 10 of the Constitution. The irony in this argument by federal representatives is precious: After all, it is the federal government that has been trying in vain to force states into an unconstitutional Real ID strait-jacket, a clear violation of the 10th Amendment.

Of course, without federal cooperation the plan will never happen, which the Arizona bill recognizes, stating that the act, "is not effective unless the federal government enacts legislation that authorizes this state to implement a temporary guest worker program." As of now, the granting of such powers seems highly unlikely, especially from a federal government that has been more obsessed with consolidating as much power as possible, without so much as a gesture towards state's rights.

The next administration, however, should reconsider its stance. One of the great effects of the oft-forgotten founding principle of federalism is the experimentation that comes out of each state's political laboratory. Such experiments in democracy have yielded the successful mail-balloting program in Oregon, the environmental standards of California and the legal possession of up to an ounce of marijuana in Alaska.

If any of these proposals were suggested at a national level, they would be widely denounced, and would fail to pass. This is exactly what happened when the federal government tried to institute a guest-worker program in 2007, falling flat when a bill that managed to ruffle everyone's feathers was soundly rejected. This was the impetus for state-based action: The Arizona state senator behind the guest-worker proposal, Marsha Arzberger, said that, "The federal government has not met the responsibility to come up with comprehensive immigration reform."

Should the federal government remain aloof, then we will be left with what have had for the last several years: Furious stands by Hispanic groups and the Minutemen, refusals to compromise, refusals to change. The status quo will remain the same, until some sort of breaking point toward protectionist nativism or nonchalant status legalization. The legislators who want serious reform, the immigrants who want to earn more funds for their children and the businesses that want to be able to afford staying within the law should all be given a chance.