Liberal Is No Longer Trump Alarmist

A new generation of crud beckons. 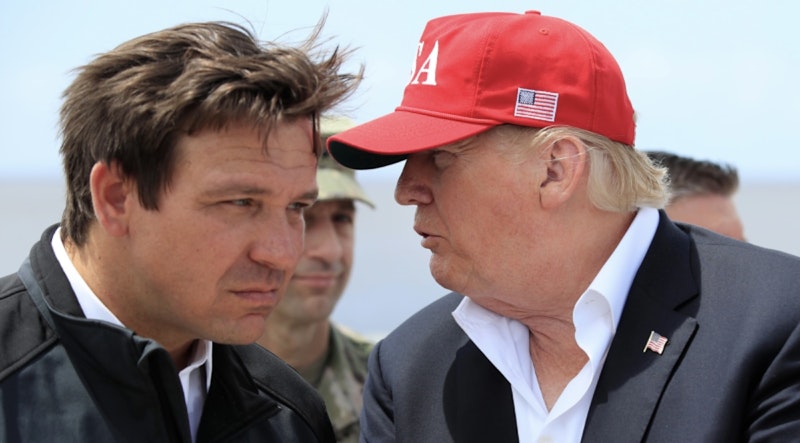 One thing a con man shouldn’t do is show up a second time. Donald Trump, who went from menace to joke without passing competence, has decided to run for president again. Cue Ron DeSantis on a debate stage in August 2023. The Florida governor motions broadly at his opponent. “One thing about that guy,” DeSantis says. “He always loses. And okay, where’s the damn wall?” The phrase takes the party’s base by storm. Soon Trump hears it when he’s out campaigning; he sees it on signs.“Loser” catches on too. Wise guys on Twitter push #LosinDon, in tribute to the ex-champ’s hallmark style of name-calling. But that style’s done now—too complicated. “Loser!” the crowds yell. Trump flames out early in the cycle and nobody has any further use for him. He’s done.

To me, the above story’s the most alarming Trump ’24 scenario. For a different view, here’s a “former White House official” who served under Trump. “I think if he’s even our nominee, we may lose our country,” this unnamed person told Olivia Nuzzi of New York. “Even if I don’t believe he can win a general again, I think he could burn down the country. I think it’s that dangerous. I’m terrified.” I’d say the bigger problem would be the Republican base, not Kellyanne Conway’s ex-boss. (She’s my guess because I can see her trying to enter polite circles by providing blind quotes about Trump that are extra high-minded and denunciatory.) He listened to the people phoning into Rush Limbaugh and gave them what they wanted. The conniving old sack didn’t create their nastiness, he encouraged it. Now we have a new generation of nastiness and it’s leaving Trump behind. “Groomer” isn’t his; it’s more of a DeSantis thing.

The base was all for Trump’s 2020 power grab, and they’ll be for the next one. Yes, avenues for tampering with the electoral college were just closed off by Congress. If this means the election process is now invulnerable, then fine. If other weaknesses can be exploited, then the attitude shown by the Republican base remains a threat to our nation’s freedom. As long as persecuting minorities and spitting on democracy are so popular with Republican voters, I hope Trump remains on hand to screw them up. I don’t want him to flame out. I want him to hang on until the babies in the GOP are so mad at each other that the place falls apart. The big slob goes third party on a few key ballots, or else he noisily tells his followers to stay home. Or somehow he’s nominated, a walking wedge issue who allows the Democrats to be the only pro-democracy, anti-coup party in the race.

But I’m a pessimist. The GOP didn’t self-destruct in 2016, and I don’t think it will now. The first time, anti-Trump voters took a dive late in the primaries, letting Trump chug into the convention with enough delegates. This time pro-Trump voters will be the ones to say the hell with it. For Trump supporters, this is year seven of piddling results. He became their hero in 2015 and by now they’ve noticed that their hero doesn’t deliver. A lousy tax cut cobbled together by Paul Ryan, the abuse of innocent children at the border, but that’s about it. The schmucks are still screwed or feel like they’re screwed, and Fox tells them the illegals are still swarming in. Whatever the base feels, it isn’t tired of winning. After years of built-up hopes, Trump voters have found themselves losing in ways unthought of. Who knew about masks in 2015, or freaky-looking kindergarten teachers, or schools telling kids that George Washington had slaves’ teeth in his mouth?

Supporting Trump used to make his fans feel like winners. Now it doesn’t, so he serves no purpose. They’ll throw away this particular quack remedy and try another. Perhaps an elected official who’s shown how useful government can be for smiting the base’s enemies. “Where’s the damn wall?” he’ll say, and a new era of cruddiness will begin.