Jesus Would Not Have Blamed Children For Being Shot 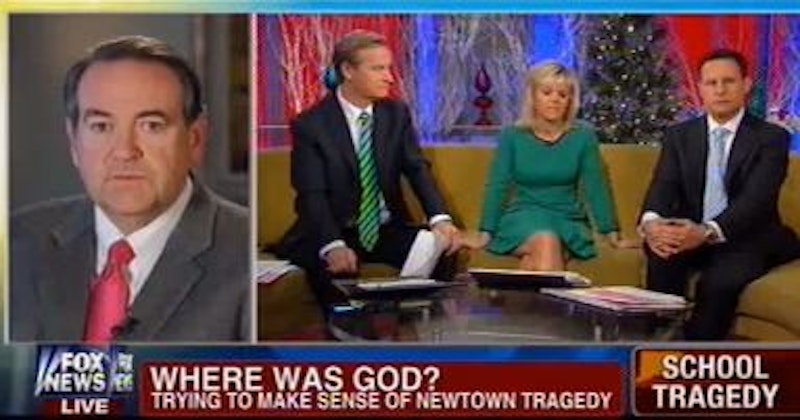 America has brutal mass gun killings frequently enough that we've got it down to a ritual. Gun-control advocates desperately try to get legislation passed in the two-week window that is the limit of the American attention span. The NRA declares solemnly that we shouldn't politicize the tragedy, no matter how many similar tragedies there have been in the past, or are likely to be in the future. The media spews inaccuracies and oppressive sympathy in about equal measure, cavorting in the most real of all reality television shows—the one involving multiple deaths.

And, as part of the ritual, pundits pop up to spout nonsense. On cue, Mike Huckabee appeared to announce that the shooting is no surprise because American schools aren't sufficiently Christian. "We ask why there is violence in our schools, but we have systematically removed God from our schools," Huckabee said on Fox News. "Should we be so surprised that schools would become a place of carnage?"

I agree with Huckabee. America really is not a Christian nation. And the way you can tell that we're not a Christian nation is that you have self-proclaimed Christian leaders like Huckabee standing up in the public square, looking down at the suffering, and channeling, not Jesus, but Job's comforters. "Who, being innocent, has ever perished?" Huckabee asks. "Where were the upright ever destroyed?"

Any Christian should know the answers to those questions. It's the central mystery of the religion. Christ, being innocent, perished. The upright man was destroyed upon the Cross. If Christianity means anything, surely it means Cavalry, and if Cavalry means anything, it is that, in this world, the good suffer.

Huckabee's victim blaming, then, isn't Christian. In fact, in Christian terms, it starts to look more than a little Satanic. And from that perspective, too, one can see a continuity between Huckabee's eagerness to hit those who are already prostrate and America's fascination with guns. If Job's suffering is his own fault, if weakness and pain equate to wickedness—then power must equal goodness, Q.E.D. If victims are to be blamed, the surest way to escape blame is not to be a victim. And one way not to be a victim is to get a gun.

One inevitable reaction to a large-scale gun killing like Newtown is that anti-gun-control advocates start to fantasize about what might have been if only the victims had had guns themselves. In this case, some people have advocated that we start arming teachers. Alternately, Megan McArdle suggests training children to run at shooters. The best and only reaction to violence is more violence—even if that violence has to be perpetrated by 10-year-olds.

The truth is that once you've set up a situation where you're relying on grade school kids to attack adults carrying semi-automatic weapons, you've already failed. The goal is to avoid a situation like that to begin with. McArdle is a libertarian who worships individual choice and pragmatism, and she's bound by that religion to insist that everybody should have as many guns and as many rounds as they can purchase with their dollar-stamped markers of morality. But Christians like Huckabee aren't supposed to worship pragmatism, and surely they're not supposed to worship violence or power. They're supposed to worship the man who died on the Cross—who said the meek shall inherit the earth, who healed his enemies, and who suffered. If our society is so obsessed with power that even Christians can't bring themselves to identify with innocent victims, then maybe we really are damned.