Now 72, the man unfairly derided as Gov. Moonbeam is attempting to cap a long and exceedingly curious political career. 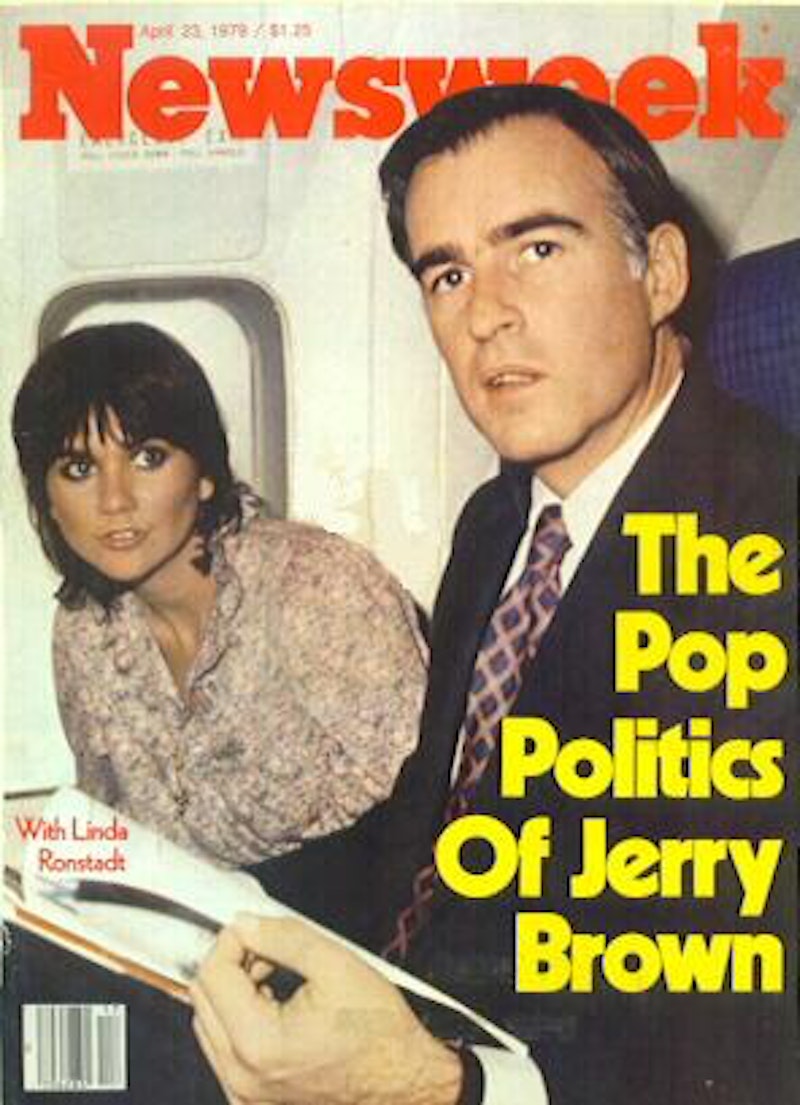 At some point in the next 10 years the definitive biography of Jerry Brown will be written by a journalist/historian of the same caliber as Richard Ben Cramer, David Maraniss or David Remnick and it’ll be a dilly. How could it be otherwise so? Brown, currently in a nasty and close race with former eBay CEO Meg Whitman to reclaim the governorship of California, is, at least by my reckoning, the most fascinating and complex American politician of the past 35 years. Consider the Democrat’s resume and try to come up with a man who even comes close.

Brown, in the Watergate election of 1974, at the age of 36, succeeded Ronald Reagan as California’s governor, inheriting the seat his father held from 1958-66 (defeating Richard Nixon in ’62, clobbered by Reagan in ’66). A onetime seminarian, Brown eschewed the governor’s mansion once elected and instead rented a small apartment in Sacramento. He also ditched the state limo for a smaller car, unknowingly showing he was Green before Green, New Age before New Age.

Two years later, he made a late entry into the Democratic presidential campaign, an audacious decision that was informed by both disgust for front-runner Jimmy Carter and bald opportunism. He lost, of course, but gave the Anybody But Carter movement a thrilling couple of months—and irritated the future one-term president immensely—combining showbiz glitz with machine politics. I was a student at Johns Hopkins in Baltimore at the time, editor of the school’s newspaper, and was mesmerized by the Brown campaign, which blew into the state that May with a frenzy I hadn’t seen since Bobby Kennedy’s aborted campaign eight years earlier.

As opposed to the pious Carter, the front-running “I’ll never lie to you” Sunday school teacher from Georgia, Brown was a man of the moment. I attended two of his whirlwind events (not mere rallies), and Brown, accompanied by an entourage that included girlfriend Linda Ronstadt and several cast members of Robert Altman’s seminal ’75 film Nashville, electrified the huge crowds, saying, for example, that America was “entering an era of limits.”

You didn’t need any controlled substances to hallucinate about the (very slim) possibility of Brown in the White House the next year, by far the youngest president and the first anti-Vietnam candidate to make it that far. Brown won the Maryland primary and received the full-bore media splash as the Andy Warhol/Bob Dylan/Kurt Vonnegut of politics. As a young man of 20, this was a spectacle that went beyond mere cool; it was the political equivalent of Dylan’s Rolling Thunder Revue barnstorming of New England in late ’75.

Brown, aided by Gov. Marvin Mandel’s machine, creamed Carter in the Maryland—49-37 percent—which ticked off the front-runner and eventual nominee and president. Carter, while admitting to a New York Times reporter that Brown was an “attractive” candidate, whined that the Californian wasn’t really running for president, and was a pawn of the Democratic political establishment.

Re-elected as California’s governor in ’78, the year of the Howard Jarvis Proposition 13 tax revolution, Brown, who staunchly opposed the historic populist groundswell, promptly flip-flopped and embraced the measure as the “will of the people.” As expected, he challenged the tortured Carter in the 1980 primaries, but was eclipsed by the inarticulate and meandering campaign of Ted Kennedy, who appeared to be running to lose, to get the family imperative of regaining the White House off his back. By this point, Chicago Sun-Times columnist Mike Royko had dubbed Brown as “Governor Moonbeam,” a tossed-off barb that a lazy and fickle elite media embraced as dismissive shorthand for a man who could lap 99 percent of them in brainpower.

Brown’s ’80 campaign fell apart in a glorious disaster staged during the Wisconsin primary, when he commissioned Francis Ford Coppola to direct a live, razzle-dazzle half-hour television commercial on the steps of the State Capitol building the Friday night before the April 1 election [http://www.bravamagazine.com/article.jsp?id=1857&department=27]. The spot, which would be commonplace today, failed for any number of technical snafus, including the candidate slipping in and out of the picture, and he withdrew from the race after losing Wisconsin in a rout. Still, his ubiquitous slogan of this ill-fated run was ahead of its time, even if it was considered mumbo jumbo in 1980: “Protect the Earth, serve the people, and explore the universe.”

In 1982, running against Pete Wilson for the U.S. Senate, Brown was the victim of his version of Hurricane Katrina after, on his watch, medflies caused havoc in the state’s farming community, and the state’s voters, probably weary of the iconoclastic Brown, turned on him. Shortly after, in a combination of curiosity and self-imposed penance, Brown studied Buddhism in Japan and later worked in India under the auspices of Mother Teresa and tended to the sick and dying in Calcutta.

In what can only be considered as an exceedingly strange about-face, Brown returned to the U.S. to run for chairmanship of California’s Democratic Party. Winning the post, the ascetic raised a fortune for candidates, and looked like a career hack politician.

Ever the chameleon, Brown ran for president again in ’92, denouncing the practice of accepting corporate contributions, opposing NAFTA and proposing a flat tax of 13 percent on income and an identical 13 percent valued added tax. That Brown could at once be a protectionist and work with supply slider Arthur Laffer on his tax program (ginned up with populist rhetoric that the very wealthy would no longer be able to avoid tax loopholes), was of a piece with his entire paradoxical career. He also wouldn’t accept any donations more than $100 and, in another prescient tactic, would, rather obnoxiously, hold up a sign for his toll-free number during the debates, trolling for contributions. While campaigning, he slept on couches, dressed casually and stunned future president Bill Clinton by winning the Connecticut primary. New York was next, and in one very memorable debate, Brown brought up Hillary Clinton’s questionable ethics in her Arkansas legal career, as well as Whitewater, and Bill Clinton, very theatrically, threatened to punch him in the nose.

Living in New York at the time, I followed Brown’s stops in the city, and though he was always late, his rhetoric soared—not in a Barack Obama sort of way, but for its quirky common sense. I didn’t buy into his NAFTA-bashing, but Brown was chockablock with ideas, which was unique at that or any other time. He’d become the Candidate Un-Plugged, and with chief aide Jacques Barzaghi always at his side, or at the foot of the stage, Brown’s candidacy was almost as exhilarating as the one in ’76. At one appearance in the Village’s Washington Square Park, I asked Barzaghi about front-runner Clinton, and he was quick to respond: “The man’s a fucking asshole, a liar and a clumsy narcissist.”

Subsequently, after getting the bum’s rush at Clinton’s coronation at the Democratic Convention in NYC that summer, Brown dialed down his ambitions, choosing to run for, and win, the mayoralty of Oakland, where he served eight years before becoming California’s Attorney General in 2004, a post he currently holds.

Like anyone else who’s honest, I’ve no idea how Brown will fare against Whitman in November’s election; he’s running in an awful Democratic year in an economically hobbled state and Whitman has a fortune at her disposal. Brown’s back to espousing traditional Democratic talking points, which aren’t to my liking, but politics aside (and since I don’t live in California), from a biographical point of view it’d be pretty amazing if the onetime “kid,” now 72, who ran for president at 38 became the state’s oldest governor. I asked a couple of friends who live in Los Angeles for their pulse on the contest, and both responded that no one in their personal and professional circles are even talking about the square-off. One, a staunch Democrat, feared that Brown will be viewed as a “has-been” and unless Whitman melts down (completely possible for a novice candidate), he’ll have a tough go of it.

A classmate of mine, also present at Brown’s Maryland appearances in ’76, is sticking by the “old coot,” saying, “I’m not sure that any governor can accomplish much here in California in this polarized climate, but I do believe that a Democratic machine insider has a better shot to succeed than a Republican outsider or a former actor/bodybuilder.” He added that his girlfriend can’t stand Brown, thinks he was a lousy governor the first time around, and believes that a corporate CEO would have better solutions. My guess is that they’ve tabled political discussions for the time being.

The Brown/Whitman shoot-out won’t receive mass national attention since the focus will be on Congress and whether or not the GOP will blow the opportunity (say cheese, Sarah Palin!) to make substantial gains in the House and Senate, but whether or not Jerry Brown can once again lead the nation’s most populous state is more than a mere side story.