It’s No Time for an Obama Compromise 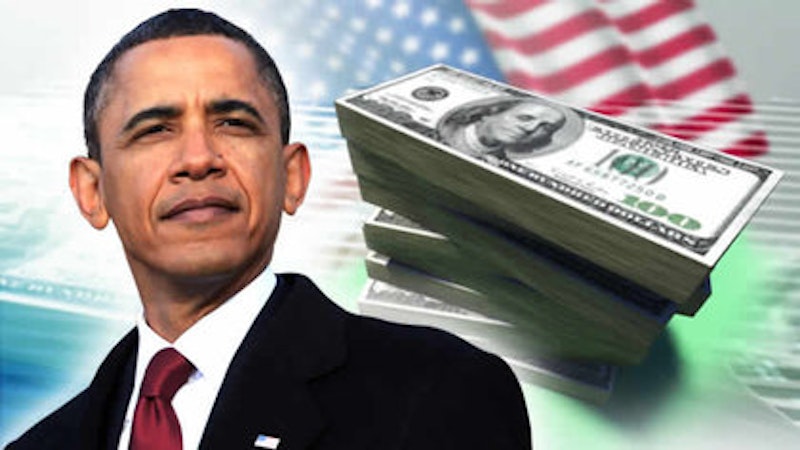 Politics and economics ramble hand in hand like mismatched partners. The two are intricately woven together though it’s tough to discern their connection based on the competing renditions being advanced by the two major political parties.

What we are watching is Democrats and Republicans each trying to dismantle the other’s constituencies. Democrats want to pick the pockets of the rich, and Republicans want to eat the lunch of the poor. The fiscal cliff is nothing more than an artificial barrier that was created by Congress when it was unable to make a decision.

The immediate impact of doing nothing, of going over the fiscal cliff, is instant austerity—the same hard-headed notion that caused the economies of nations such as Greece, Spain and Great Britain to plunge into recession. Inaction will drain disposable income from the economy just as it is showing sure signs of recovery. The automatic increase in the payroll tax (Social Security) from 4.2 percent to 6.2 percent alone will suck $115 billion in recreational dollars from the economy. And cutting off jobless benefits for two million unemployed Americans will further dampen spending as will failure to reinstate the Bush tax cuts for the middle class. Austerity is for boom times and spending is the cure for recessionary periods.

For Democrats, the way out of the current fiscal mess, short-term and long-term, is to raise taxes on the wealthy, in this case the top two percent, or those earning upwards of $250,000. And for Republicans, the roadmap to fiscal solvency includes demolishing the social safety net by cutting such programs as Social Security, food stamps, Medicare, Medicaid, meals on wheels, child care, day care for the disabled and the earned income tax credit.

President Obama and his fellow Democrats want to raise the top tax rates to 39.6 percent, the same as they were under President Bill Clinton when the economy was booming and America was prospering. Yet Republicans have resisted raising taxes through two unfunded wars and a major recession on the disproved notion that less is more, the trickle-down theory that lower taxes will produce more revenue. No Republican has voted for a tax increase since 1990, according to The New York Times. Obama has compromised far more than Republicans in his effort to accommodate, much to the consternation of his own Democratic party.

Obama campaigned on a pledge to raise taxes on the wealthy. Republican Mitt Romney and his understudy, Rep. Paul Ryan, campaigned on Ryan’s budget plan to get the poor and the sick off the government’s back. Obama won, and every poll since the election shows that the public supports Obama’s approach to dealing with the nation’s fiscal problems and assigns blame to Republicans for blocking his plan. But Ryan’s budget, the framework for the Republican deficit-cutting plan, is a hoax. It would add nearly $6 trillion to the debt over 10 years, far more than Obama’s plan. Public approval of Congress is at 13 percent. The miracle is that it’s that high.

Republicans argue that cutting taxes places more money in the hands of the wealthy who will invest their profits and gains and stimulate the economy to produce more jobs and create a demand for manufactured goods which will in turn create more jobs, etc. This is baloney.

Economics is about money in motion. If money isn’t moving through the economy it does no one any good. Right now, taxes are the lowest they’ve ever been and businesses are sitting on $2 trillion in profits and aren’t investing a dime because consumer demand is low on account of the uncertain economy. So where are the jobs?

President Bush cut taxes twice—in 2001 and 2003—the tax cuts the two parties are fighting to make permanent for lower wage earners, or those individuals and businesses earning under $250,000. Yet study after study has concluded that the Bush tax cuts produced the lowest growth rate of any eight-year period since World War II and even contributed to the pickle we’re in right now.

Republicans like to cite President Ronald Reagan’s theory of trickle-down economics as their guidebook, “A rising tide lifts all boats,” Reagan liked to say. Yet Reagan raised taxes 11 times as governor of California and as president. He was more of a pragmatist than a conservative. And remember, Reagan was once a New Deal Democrat.

Republicans also like to raise another false claim, and that is that China owns most of America’s $16.5 trillion debt. China owns only seven percent of U.S. debt, followed in diminishing amounts by Japan and Great Britain. The Federal Reserve owns 70 percent of America’s long-term debt, which means that America is financing its own spending by purchasing its own treasury notes. The government is, in effect, lending money to itself.

Very few people except the very twisted begrudge another’s success and wealth. A century or more ago, America had a social class known in the derogatory as the “Robber Barons,” those who made their money by their wit, skill, single-mindedness and exploitation of people and natural resources. They included, among others, John D. Rockefeller, Jay Gould, Andrew Carnegie, John Jacob Astor, Henry Clay Frick, Andrew Mellon and Cornelius Vanderbilt.

As they amassed huge wealth, the captains of industry burnished their images and immortalized their names by establishing great universities, libraries, hospitals, museums, galleries, foundations and other works to benefit the public purpose. Today’s grifters use their fortunes from derivatives and arbitrage in displays of excess by purchasing $90 million condominiums, $100 million yachts and fleets of private jets. They manufacture nothing and their wealth benefits no one but themselves. Only a handful—Warren Buffett, Bill Gates and Mark Zuckerberg, to name three—have given back generous sums of their fortunes to underwrite public works.

The rules of politics are the rules of the marketplace. Follow the money is more than just a saying when it comes to Republican politics and another reason why Republicans refuse to increase taxes on the rich. The yellow brick road illustrates that the GOP is in the pocket of Wall St. as is evidenced by the last election.

The majority of Wall St. contributions shifted to Romney and the GOP just after Obama pledged to raise taxes on the wealthy and Romney promised to repeal the Dodd-Frank financial regulatory legislation as well as Obamacare. According to the Center for Responsive Politics, Wall St. spent a total of $2.5 billion in the 2012 election cycle, the majority of it on Republicans. There were 149 of the super-rich who each gave $500,000 or more to Romney.

Republicans like to further muddle matters by conflating short-term debt with long-term debt. And to further confound matters, they toss in the debt ceiling as part of the revenue talks. Long term debt is a concern. Short term debt is not simply because borrowing is cheap and interest rates are almost non-existent at a time when the economy requires stimulants. But, as with all negotiations, the more issues that are on the table the more difficult it becomes to reach a resolution.

The debt ceiling is an arbitrary cap on government borrowing. If it is not raised, as Republicans are threatening, the nation can go into default on paying its debts. The debt ceiling has been raised 76 times since 1962 and Congress has raised it 11 times since 2001. The last major battle over the debt ceiling occurred in May. This time, Obama is being counseled, as he was in May, to ignore Congress and automatically raise the limit himself. This time he may follow through.