How The "Celebrity-Journalist" Myth Ruined Reporting

Too many people thought they might be Woodward & Bernstein; too few recognized how unglamorous the industry really is. 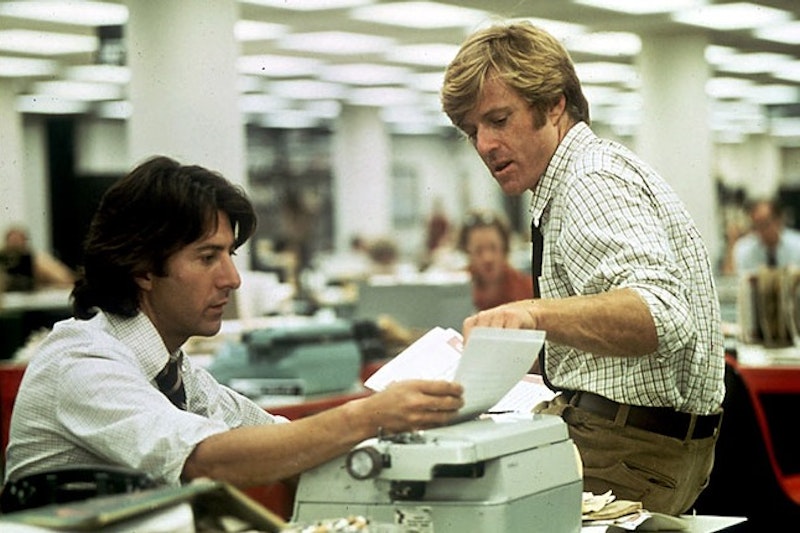 One day last week an acquaintance stopped by my office in workaday Baltimore, up from the noxious cauldron of smug uniformity known as Washington, D.C.—an aesthetically pleasing city if it’s stripped of all the skeezy politicians, lawyers, journalists and lobbyists—and we chatted amiably for 90 minutes or so, racing through a fairly narrow range of topics such as Mitt Romney’s unsettling rise as a Republican spokesman, the withering Washington Post, Barack Obama’s inability to match accomplishments with rhetoric and, inevitably, the economic horror that now defines the mass media.

At one point, this 30-year-old fellow, an accomplished author and op-ed contributor to an enormous array of print and online venues, asked me the following question, one that was both quaint and stripped of cynicism: “When did the field of journalism switch from a middle-class vocation to one that’s bloated with ‘stars’ trying to rack up television appearances and book contracts?” I felt a bit like Methuselah, even though I wasn’t yet born when the stereotype of tireless, poorly paid reporters who’d race from the bar to a courtroom based on a tip from someone named “Squiggly” to sneak a story into the paper’s final edition was entrenched in American popular culture.

The answer’s easy and I don’t think many old-timers would dispute it: Watergate, and the phenomenon of Bob Woodward/Robert Redford and Carl Bernstein/Dustin Hoffman, changed this country’s daily papers’ newsrooms inalterably, for better or worse depending upon your perspective. Given the current, and rapid, disintegration of the traditional media industry, it may seem hard to believe that in the mid-1970s journalism schools were swollen with applicants, and nearly every newspaper editor of distinction was intent—if not reaching the Olympian heights of the Post’s larger-than-life editor Ben Bradlee (immortalized by Jason Robards in All The President’s Men)—on winning Pulitzer prizes with investigative reporting series that might take up to a year to complete, and damn the expense.

During the summer of 1976, prior to my senior year at college, I was fortunate enough to land a four-to-midnight clerk’s job in The Baltimore Sun’s library, and was both well-compensated and given the run of the paper’s morgue of clippings and photos dating back to H.L. Mencken’s glory years. As an editor at the Johns Hopkins News-Letter, I was bent on pursuing a career in journalism, and like many peers had harbored aspirations of perhaps becoming a foreign correspondent or political reporter who held court at the Democratic and GOP national conventions. And though I worked with several wonderful people in the library that summer—many evenings, after punching out at midnight, we’d stop at the nearby bar Burke’s for a few mugs of beer and fist-size onion rings—the actual newsroom of the paper (at that the time the A.S. Abell Co. published both The Sun and Evening Sun) came as a shock. It was antiseptic, like an insurance office, say, with well-groomed and intense young men in suits working the phones and manically typing 18 column inches on this or that zoning dispute or small-bore political feud in the city or Baltimore County. With the exception of the sports department—a great and hilarious group of guys who abided by no dress code and didn’t take themselves too seriously—it didn’t appear like much fun.

Granted, this was just a summer-long impression from a Hunter S. Thompson/Alexander Cockburn/Nat Hentoff influenced 21-year-old, and The Sun was still one of the country’s quality dailies (the groundbreaking series on the Pallottine Fathers scandal by Steve Luxenberg and Mark Reutter was The Sun at its best); nonetheless my obviously naïve idea of a workplace imbued with the spirit of Jimmy Breslin, Mike Royko and Dick Young was quickly dashed. So I went in a different direction—“alternative” journalism as it was then known—and aside from occasional articles in The Wall Street Journal or New York Sun, remained in that small media niche ever since.

That’s not to say all, or even most, daily journalists in the fat decades were pricks who whooped it up with herbal tea and treated cigarette smokers like pariahs even before local governments stuck their noses into that onetime controversial issue. In the mid-80s, my longtime friend and colleague Phyllis Orrick and I were unofficial hosts of a weekly happy hour gathering at downtown Baltimore’s swank Brass Elephant bar that included a rotating cast of writers, politicians, artists and the occasional junkie. Mike Bowler, Dan Rodricks, Paul Mindus and Mike Lane, all of The Evening Sun at the time—this was before Times Mirror Co. bought out the family-owned paper in ’86, beginning the long descent of the company, which was accelerated by pre-Sam Zell Tribune Co.’s acquisition in 2000—were often present and a lot of fun. You got the feeling those guys were men out of time, who’d have been more comfortable and happy in the newspaper era of the 1940s or 50s.

I’ve written earlier this year about all the whining and chin-scratching that’s taking place in “legacy” media as the industry morphs from horse to car, but there’s a limit to kicking a dying dog, even when it’s deserved. Sam Schulman, writing in the May 20 Journal, isn’t so charitable, savaging today’s hard-luck key-punchers, concluding, “Now softbitten reporters are dumber than the rest of us, and they prefer to laugh at themselves.” Schulman cites several men, described as sad-sacks, including The New Yorker’s David Denby, The New York Times’ Edmund Andrews, Jeffrey Goldberg and Michael Wolff, all of whom have chronicled in either books or magazine articles their financial misadventures. He’s especially hard on Andrews, a financial reporter, whose book Busted (excerpted in the Times) was about how he and his wife got caught short in the real estate downturn.

Schulman: “Not only Mr. Andrews but his employers at the Times were apparently happy to parade the fact that their crack reporter acted like a hayseed Jimmy Stewart instead of a knowing Cary Grant.” He then dings Andrews one more time by calling Goldberg “a far more distinguished journalist.” He goes on to compare today’s softies with earlier “participant” authors like the late George Plimpton, an author whose famous Paper Lion “dealt with [an] ordinary [man] who bit off more than [he] could chew. But then [he] made it a matter of honor to live up to the challenge. There was no cheerful confession of failure.” One can imagine that the aristocratic bon vivant Plimpton would chuckle, at least outwardly, at being described as “ordinary,” but I think Schulman misses the point.

I dislike Denby’s writing, for example, but he’s no “dumber than the rest of us,” by writing a book, American Sucker, about his ill-advised day-trading during the tech boom of the late 90s, in which he racked up an amateur’s gains only to see them all disappear. At least Denby, Andrews, Goldberg and Wolff were in a position to turn a profit writing about their mistakes, an opportunity not afforded most Americans who become immersed in financial activities that are outside their expertise. All four of the “crybabies” Schulman cites are, in fact, still working and in no apparent danger of getting booted out their chosen profession. One can think of, oh, maybe thousands of less famous journalists, laid off or bought out, who wish they could make the same claim.