When is a Bad Bill Worth Saving?

Obama's health care plans are almost surely thwarted, but that shouldn't stop him from pushing through something. 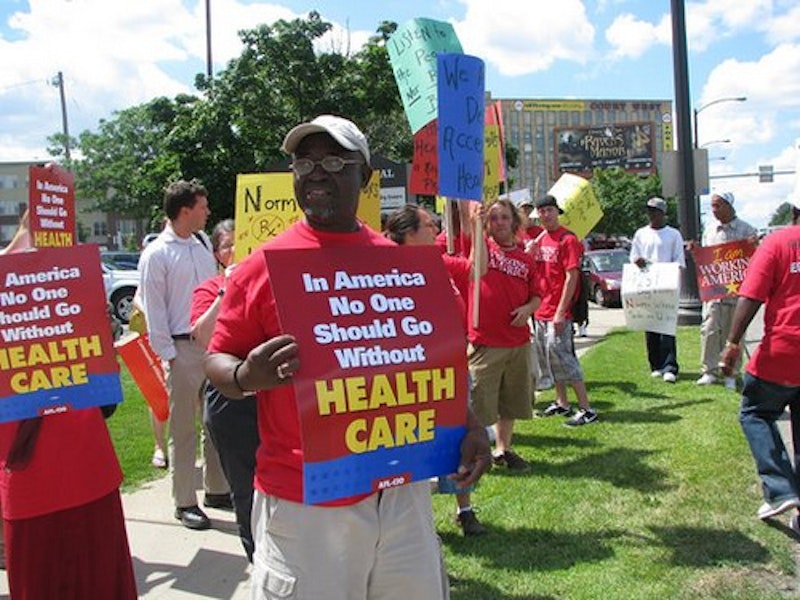 During the past several months there’s been much political wrangling over the fate of President Obama’s proposed healthcare overhaul. Most agree that the system is broken and needs to be fixed, but consensus ends there, even among Democrats. Blue Dogs hesitate to pay for healthcare if it means raising taxes, and Republicans have been more than obliging to cement their reputation as the Party of No.

Healthcare advocates decry the wrangling and fear that the bill, when passed, will be ineffective. They believe that the only legislation worth passing is one that vastly expands coverage, includes a public plan option, and is paid for with tax increases on the wealthy. Any other watered-down version, they fear, would be disastrous.

However, historical context makes it clear that ineffective legislation can be a much more preferable alternative to no legislation at all. When, healthcare advocates should be asking themselves, is a bad bill worth saving?

The situation the country finds itself in today is similar to the one we found ourselves in more than 50 years ago, at the height of the civil rights movement. Then, as now, a majority of Americans wanted change. Then, as now, we could not seem to agree on how to go about changing things.

In 1956, the United States Senate had not passed a piece of civil rights legislation since Reconstruction. The vast majority of African Americans were not registered to vote; those who were registered were often intimidated into staying away from the polls. Although the 13th Amendment supposedly guaranteed African Americans the right to vote, a combination of southern Jim Crow laws and northern inaction had, by the 1950s, effectively guaranteed the opposite.

Although Democrats had been the majority party for much of the 20th century, including during Franklin Roosevelt’s presidency, a core of so-called Dixiecrats, led by such men as Richard Russell and Strom Thurmond, had consistently prevented the Senate from voting on, let alone passing, any piece of civil rights legislation. Liberal Democratic senators, Hubert Humphrey foremost among them, wanted to pass civil rights legislation, but could not muster the necessary votes from liberal Democrats and moderate Republicans.

The Dixiecrats relied publicly on states-rights arguments, arguing that voting laws were state, not federal, matters and thus should not be regulated by Congress. Privately, of course, racial bigotry was the primary motivator. In practice, delegating voting laws to the states meant that southern states were free to discriminate as they saw fit.

Knowing this, Johnson set out to pass a bill that southern states-righters would support. The Civil Rights Act of 1957 was just such a bill. Amended and altered in committee beyond recognition, the 1957 Act did nothing to aid in African American voter registration. In fact, in 1960 there were fewer registered African Americans than there had been in 1956.

The true legacy and importance of the Civil Rights Act of 1957 is that it marked the turning of the legislative tide in the battle for civil rights. After 80 years of inaction, beginning in 1957 Congress passed a series of civil rights bills that would culminate in the seminal Voting Rights Act of 1965, with Lyndon Johnson in the White House.

Had the most liberal members of the Senate in 1957 triumphed and blocked the bill because it was not effective enough, would Lyndon Johnson have been able to pass the Voting Rights Act of 1965? Maybe. But was the path towards truly effective civil rights legislation made vastly easier as a result of the 1957 bill? Absolutely.

The best possible scenario for healthcare advocates in 2009 would be a bill that makes it through the House and Senate in pristine condition: universal access; public options; employer contributions; decreased costs. But if in today’s Congress it truly is impossible for such a bill to survive, we certainly could do worse than legislation that includes expanded, but not universal, coverage; increased efficiencies within the industry; slightly decreasing costs. Perhaps a less than perfect bill in 2009 will lead to a better bill in 2015.

As the fight for civil rights taught us more than 50 years ago, flawed legislation can be better than no legislation. If the public wants reform and its advocates keep persisting, reluctant politicians cannot resist them forever.