And stop bitching about gays ruining the “sanctity of marriage.” 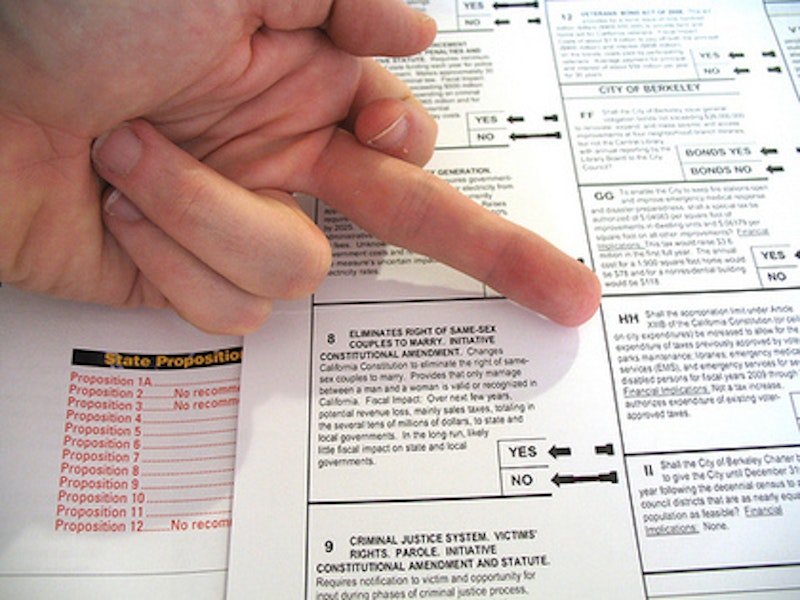 Imagine that every time you and your smokin’ hot boy or girlfriend had sex, the orgasm was interrupted by a knock on the door from the Po-Pos. “Remove your cock and put your hands up!” they roar. “Casual, premarital sex is unconstitutional. Sex is for procreation, and should only be had within the sanctity of marriage,” they lecture. What a twat. I mean, why should it matter to the Po-Pos when you have sex? Right? Shouldn’t people just mind their own bitness?

Needless to say, I am majorly confused right now about why people are so up in arms about gay marriage and in favor of this whole Proposition 8 bullshit ballot in California. The Religious Right claims to be against the “gay agenda.” But how is it an “agenda” if all you want is equal rights?

I realize that not everybody is gay. I get that the “Joe Six Packs” and the “Joe the Plumbers” and the “Joe the Carpenters” of America are not usually gay—though I will tell you that the many gay sex videos I have seen suggest otherwise. And I know that some peeps probably think that the gay sex is totally gross. But you know what? I think straight sex is ultra gross, but you don’t see me launching a ballot measure to rule it out. For real, if you don’t like gay sex, shut cho ass up and don’t have it! If you don’t like gay marriage, keep quiet and don’t fucking marry another dude!

Ah, the luxury of being “normal.” Aside from superstardom, my own New York apartment and a five-book contract with a major publisher, I have wanted nothing more than to have the same stable quality of life as everybody else. I guess I’ve just wanted to be “normal,” since everything around me started telling me I’m not. Growing up in a conservative religious family, my peeps always had negative things to say about “homasessuals.” They’d go “It’s not natural! They will rot in hell!”

So as you might guess, I haven’t told my family that I’m a huge bottomy fag, and I probably never will. It’s so hard knowing that I have to live two lives—one where I’m a gay, and one where I’m not. It hurts that I can’t bring my boyfriend home on the holidays and be like, “This is the guy I’m in love with.” It sucks that people think that my wish to get married or whatever is akin to bestiality.

The bitches who oppose gay marriage endlessly cite the “sanctity of marriage.” We gotta protect “marriage as a sacred institution.” Even Barry Obama, our Lord and Savior, has said that marriage should be between a “man and a woman.” Oh yeah? Let me ask you this: What’s so sacred about wedding-based reality shows such as Who Wants to Marry My Dad, Millionaire Matchmaker, Wife Swap and Who Wants to Marry a Millionaire? and countless others? Is that your idea of sanctity? Oh, and we’ve all heard of people who marry foreigners just so they can become American citizens. Is that sacred, too? Why don’t the same people who target gay marriage also boycott everything that undermines the “sanctity of marriage,” including reality dating/wedding shows and that wedding chapel in Las Vegas?

Believe it or not, there are even gay folks out there who oppose gay marriage for fear of being “normalized” or “heterosexualized,” as the brilliant cultural critic Michael Warner describes in The Trouble With Normal. They see marriage as an oppressive institution that’s there to keep “the status quo” in place. I guess that’s why the Religious Right is so up in arms about gay marriage—not only because they hate gays, but because gay marriage would be altering the status-quo. They fear a queer planet.

Which is really funny to me. Why do people think that gay marriage will make civilization will fold as we know it? Babies will instantly catch fire. Queens and dykons everywhere will convene and convert all children to gayism. Terrorists will attack. Women will be forced to wear flannel and men will have permanent highlights.

But check this out: Spain, Switzerland, the Netherlands, Canada, the UK, France, Massachusetts, Germany, Hungary, Finland, Denmark, Luxembourg, Portugal, Vermont, Sweden, California and most recently Connecticut all have some form of gay marriage or civil union.

To the best of my knowledge, these places have not been bombed out.

Before we know it, this whole gay marriage debate will be old news. People will get bored with it and protest something else. We’ll look back and be like, “Oooh they was onry back in the day.” Do you remember when interracial couples weren’t allowed to marry? Or when women or blacks weren’t allowed to vote? Or how about that women weren’t admitted to Yale College until 1969 and to Columbia College until 1983?

People will see that the gays aren’t so bad after all.

I think it’s hilarious that gay people scare the hell out of the Religious Right. But what’s even funnier is that if this ballot measure passes, all the gays of California will be angry as hell. All the queeny hairdressers and dykon mechanics should go on strike.