An Obama victory would be great, but the first test of his "unity" message will be to overcome the losing side's animosity. 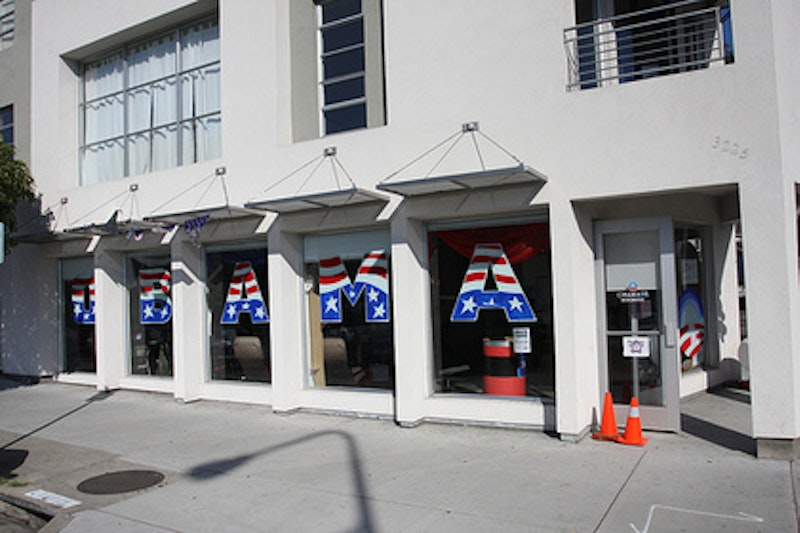 I don't want Barack Obama to win. I will vote for him, and I will work for him. I have knocked on doors for his campaign and have helped stage a benefit for his election. But I don't want him to win.

Last week some musicians here in Baltimore held what they called Hope Night, "an evening of music, film, and activism in support of Democratic Presidential candidate Barack Obama." As part of the event, I donated a very short story of mine, which was screen printed by a local artist onto a small card. The print, along with eight or 10 others designed by area artists, served as raffle tickets that we sold at Hope Night, with prizes including CDs, band t-shirts, and pieces of original artwork. The proceeds went to Obama's campaign.

I've never before worked on behalf of a presidential campaign, or any campaign. I've never wanted to, never been inspired. Though I have a few pet political interests, I'm not the most politically minded person. This time I've been swept up in the spirit. Part of it is a sense of relief, of hope, that the last eight years, which I've considered pretty dark ages for our country, are coming to an end. Part of it is, of course, the man himself. Obama is exciting, he is charismatic, and he seems to embody change, energy, pride and reconciliation. Mostly though, what draws me to work for Obama is not his campaign, not his positions, not my hope that this time we’ll elect a good and honest person to the presidency. What most inspires me to work for him is not really him at all, but rather the spirit, the energy and excitement and optimism, of those around me, my fellow campaigners.

My difficulty with politics is that I have a hard time believing I'm right. I believe in caring for the environment, that it's our duty to do so even if that means curtailing our human ambitions. But who am I? A farmer trying to sell his crops? An unemployed coal miner? I wish that I could be right, that I believed unequivocally in causes, the rights of nature, our right to unspoiled beauty, but can I? Who says beauty is better, more important, than a warm house for the kids?

The problem with choosing a president by contest is the bitterness of the losers. Someone's man or woman has to go down. In the past couple presidential cycles this has meant that half of the country, by popular vote, has lost. All those Democrats, including me and most of my friends, have had to suffer the bitterness of George W. Bush. This time, if things hold out the way they seem to be going, all those Republicans—my neighbors with the McCain/Palin signs on their lawns—will suffer too.


My friends and I have climbed aboard; we are committed Obamaites. As I said, we've put in many hours organizing and volunteering, fashioning handmade posters for Hope Night, traveling out of state, to the front lines of the battleground, to spread the message. Thinking of it fills me with pride. I'm so proud of my friends, all of them who have put their deep talents, artistic and otherwise, to work. And what makes it special is the spirit in which this has been done. We've worked as a community, and we've worked for the things we feel strongly about, compassion for the poor and ill, the insurance-less, desire for an overdue peace, hope for a more honest government, a wish to understand, if not agree with, the other side.

It's been a pleasure to see my friends engaged in something larger than themselves, and I have to suppose that this is what the McCain supporters feel too. After all, they believe their candidate is a good person and an honest man. Who am I to claim they aren't right?

I've heard it said a couple times how great it'd be if Obama offered McCain a position in his administration. I have no idea how realistic this is, but maybe that's not what matters. The sentiment remains that, if and when Obama is elected, he will live up to the hopes we have for him, to be good and honest and fair. It's the hope that our opponents—whether they be McCain and his followers, the Republicans, the people of the world with whom we disagree—can be seen as just that, opponents, not enemies. It's the hope that, whoever takes the election will not see it as a "win," a conquering, or as a chance for dominion, power, and demagoguery. Because, okay, enough of that now. Let's look for something else. Let's put action behind hope.