For Donald Rumsfeld (A Friend)

Mourning the loss of a man who was far from evil, and more importantly, very good to me. 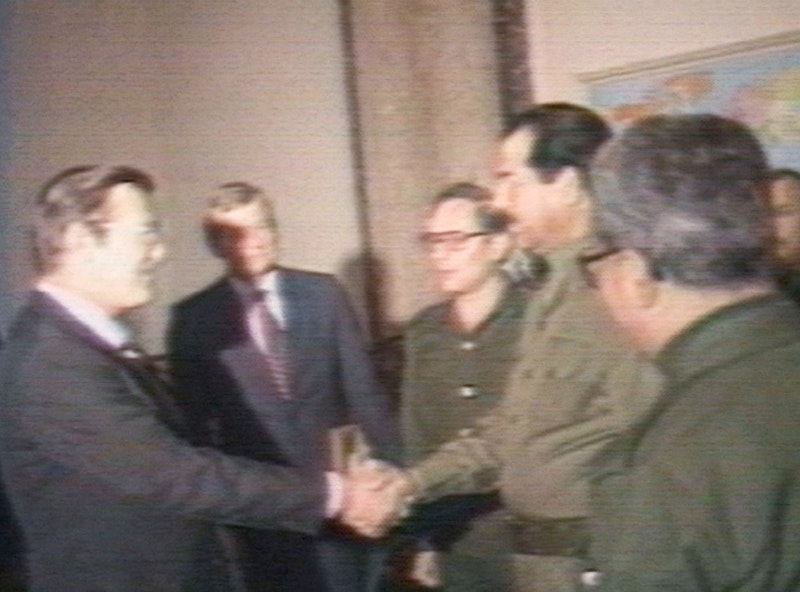 Like my wife, I didn’t know why people were suddenly sharing pictures of Donald Rumsfeld looking comfortable in vacation attire on social media. I’m forced to look at these “platforms” in order to file these columns—they must be “up to date.” So this is how I heard about the death of Rumsfeld, a friend of mine from a long time ago: via memes mocking him. His life and his work were disrespected on Wednesday and yesterday I didn’t have the strength to look at the Internet for fear of further episodes of rage induced entirely by others without any underlying condition or cause on my part. No, I didn’t mean to break the teacup in the kitchen.

Rumsfeld wasn’t an evil man. He was good to me, and that’s what counts. I guess Monica thought we were going to do some kind of point/counterpoint series, but we’re not, sorry to disappoint. I have nothing bad to say about the man, that’s not my business. I miss him. I want to talk to him again. I want to ask him what Iraq was like in the 1980s, when Ronald Reagan started losing his marbles, and if he took a Lindy walk outside the Pentagon on September 11, 2001. But I can’t anymore, because he’s dead. And that makes me sad—Donald Rumsfeld didn’t deserve to die.

How dare you curse the dead and spit on the grave of a still warm body. His family is still grieving, not to mention our military and our bureaucrats, whom we love and respect and cherish every day. I’ll be completely honest: I don’t think the invasions were a mistake. I think we had every right to go in there after what happened on 9/11, and if you ask me, we didn’t give it to them hard enough. 2002 was a difficult year, mostly because we didn’t just push the button five, six, seven times on the entire map of the Middle East and turn it all into a plate of glass. I argued that with sitting Senators! None of them listened to me. Maybe that’s why their offices got packages of “anthrax” soon after. I didn’t do it.

I remember one night in an antechamber somewhere in Arlington, I pulled Rummy over for a sidebar. “Don, this is ridiculous. You’re doing another television special?” He said he couldn’t talk; the Blackhawk was waiting. “Why are you wasting time leaving these cities and caves intact? Bomb them! BOMB THEM! BURN THEM TO THE GROUND!” He pushed me aside and ran out the door, and I was left with the janitor and Larry Kudlow, both consorting over a spilled bottle of gin and what to do about its contents. I passed on their offer for a drink.

I got Rummy on the phone some months later, right after Saddam Hussein was caught, unshaven and in a hole. It was a few weeks later, so it must’ve been around January 2004 when we talked. “Rooster, I can’t, it’s four in the morning, you’re driving my wife and I—” I told him he had no right to talk: this war was all-consuming. “What are you talking about? ‘All-consuming’? We don’t have a draft! We’re only sending the poor! It’s a bunch of psychos and born-again idiots getting sprayed. If you don’t want to know, you don’t have to know. Ya dig?”

I told him that I didn’t in fact “dig.” Nevertheless, he persisted.

“Why is it you avian interlopers always hang the Sword of Damocles over my head at the worst times? I’m working 20 hours a day and I really don’t need visit from you. Look, Rooster, I love you—and especially your wife—”

I shot him a look. It was received. Nevertheless, he persisted.

“—and we’ve had fun together. It’s been nice. I like having you around. But I’m tired. I have to go to bed.” I reminded him that it wasn’t his choice to have me as a friend, that I was, as always, assigned to world’s masters. Gentle guidance is usually all they need. Rummy was brilliant but he needed to be pushed. He didn’t want to kill them all and get it over with. I asked how many Americans he thought were worth going to war. He refused to answer. I asked him why we couldn’t just fry them all like everyone wanted to on September 12, 2001.

“Because then we’d have nowhere else to bomb. I can’t make tanks for a radioactive wasteland. I can’t contract Blackwater or Raytheon to build an Agency front in an apocalyptic hellhole. I can’t grow heroin after atom bombs go off. Anything we do there, we do for a while. That is the Penta—I mean party line. We will send people there with weapons and tools that we built and sold until we run out of people. It’s as simple as that.”

Reader, believe me I felt like David Berman in that moment. He said he wish he had stabbed Rummy in the neck when he passed the former Secretary of Defense on a city street. Well, I wish I had done the same with a quick spur claw and a “gotta go” in the early winter of 2004, before the Iraq and Afghanistan Wars had become never-ending. Maybe things would have been different. Maybe I wouldn’t have relapsed. Maybe I wouldn’t have spent $7000 at a casino in the United Arab Emirates on the way back. It doesn’t matter: I lost a friend that day.

And I lost him again on Wednesday. Reader, let me tell you again that I did a 180 on Rummy when I realized that he’d died. This was an imperfect man, but not a criminal, not even a hapless bureaucrat like Adolf Eichmann. I know in my heart that Rummy wanted the best for all people on Earth, and because he treated my wife and I well (parties, dinners, envelopes filled with drugs and money), I’m disinclined to read or even support the publication of any negative writing on the late U.S. government official. They can publish that trash on Parler or wherever the fury fascists hang out these days.

I remember Rummy in the 1980s, too, visiting and shaking hands with the man he would one day capture and kill. I think of Saddam smiling, and Rummy smiling, only the latter knowing how fate would take its course and restore order in the universe. Saddam Hussein died by hanging, Rumsfeld died of natural causes. He was called a war criminal in life, and during the Bush years, often far, far worse. People couldn’t stand the man.