Fear In The Streets

Walking around Baltimore, especially at night, can be a harrowing experience. If this is “post-racial” America, one writer hasn’t yet discovered it. 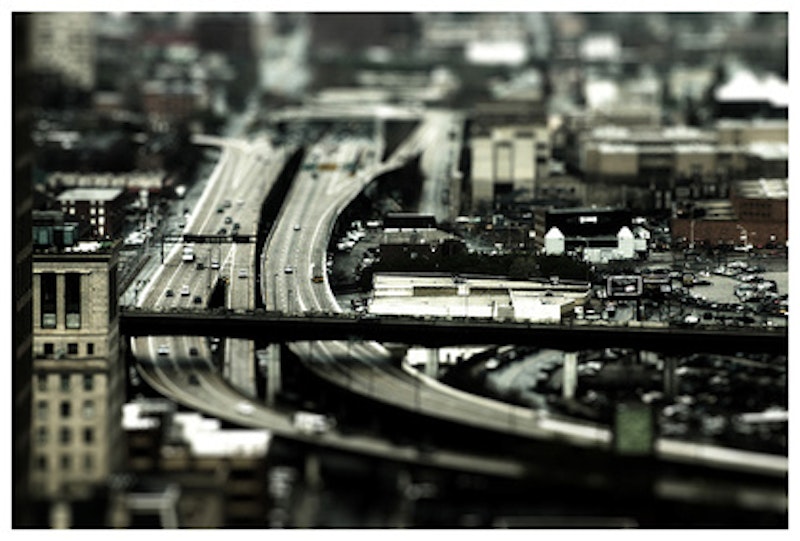 Photo by Oslo In The Summertime

Home for me is a small rural town on the eastern shore of Maryland, split by Route 50 between miles of open farmland. The population is about 12,000, and the recent opening of the Target store was the biggest news in years. About a mile from my house is the town “ghetto,” Port Street, a lower class, mostly black neighborhood consisting of a single road lined with run-down duplexes and vacant lots. Occasionally, there’s a shooting or a robbery which inevitably makes the front headlines, but that’s about it. It’s still a relatively safe area to walk through at night and I do so without fear.

I used to think that Port Street was as bad as it got. Living in my small town for the latter 10 years of my life, and in a similar area near Cape Cod for the first, I had no basis for comparison. I was sheltered, safe, and carefree. Then I moved to Baltimore.

In 2006 I started attending Johns Hopkins University, which is located in a quasi-dangerous area in northern Baltimore, a neighborhood marred by gang activity and small-time robberies and muggings. The incoming class went through the obligatory seminars on “Staying Safe in the City,” where we learned to stay out of specific areas during certain hours, keep our wallets and cell phones safe, never walk alone at night. It was a big step coming from a town where I could leave my car parked downtown with the windows down and the keys in the ignition.

I was skeptical at first, thinking that the city really couldn’t be all that bad. The beginning of freshman year gave me nothing to refute this thought, as I was living in the security-protected, on-campus housing, rarely venturing outside my boundaries. It wasn’t until later that year, as I began to spread my wings a little bit, when I began to see the dark underbelly of Charles Village.

Speaking with a few friends in the graduating senior class, I learned about Chris Elser, a student who was killed in 2004 while trying to defend himself from an intruder attempting to steal his computer. I saw the criminal reality more first-hand last December, when three friends were robbed at gunpoint a few blocks from campus. One of those three was mugged again this spring, beaten over the head and given a concussion as he was trying to surrender his wallet. Even last week, a man attempted to rob the Laundromat a mere block away from my apartment and was shot three times by the owner.

By now I’ve learned the tricks of protecting myself in what’s called Charm City, but what bothers me is the fact that I’m forced to make these changes in my life to survive. There’s a degree of helplessness and even inferiority when I have to wait until morning to walk to the 7-11 down the street, when I have to close my phone and stay alert when I hear alleyway footsteps behind me. The crime in my city controls where I go and when I go there; it shouldn’t, but it’s necessary.

Another necessary skill I’ve learned is racial awareness. It somewhat sickens me that in the 21st century, we still have to acknowledge race as a factor in society, but with a current election dominated by it, I think it’s impossible to ignore. And in Baltimore, or any high-crime city for that matter, it’s foolish to ignore race when one is traveling through a sketchy area.

Of all the crimes I listed above, the culprits were black males. Most of the street gangs that operate in the city are composed of young black men. The repetition of these crimes over the years creates a sort of inherent racism among those who live in the city, whether they’re aware of it or not. In a dangerous area, such as East Baltimore (which makes the Hopkins neighborhood of Charles Village look like Mayberry), the sight of a young, black man in a do-rag and baggy jeans is going to conjure more feelings of anxiety and paranoia than a white man in a suit and tie. It’s ugly, but again, difficult to ignore.

And I’ve discovered that the targeting of the young black individual is not exclusive to the white community. I picked up a glimpse of the black perspective earlier this summer, when I waited tables at a restaurant in Baltimore. At one point, toward the end of a night shift, one of my co-workers, a black woman, began to complain about the customers seated in her section. She was furious because from the luck of the rotation, all of her tables were black customers, and she wasn’t expecting to receive decent tips from them. What I found even more interesting was the fact that not all of her customers were the typical thuggish-looking Baltimore characters; some were just regular people, dressed relatively nicely.

Race may be an explanation of individual people’s actions, but it would be dangerous and inaccurate to label it as Baltimore’s problem. The problem is a cultural one. Kids in the inner city grow up with older brothers and even fathers who are members of gangs. Their friends join up and go through the initiation rituals of robbery and assault as young as 14. They see it every day on the streets and at home, and it becomes a part of their life.

Baltimore public schools are under-funded and far below par in test scores and academic performance. Students have no Sidney Poitier to turn their lives around and get them off the streets. That hope is replaced by the glamour and wealth that the gangs promise. They not only offer opportunities to make money, but also a sense of camaraderie and brotherhood that many inner-city kids would not find otherwise.

Living in Charles Village is strange because there is such a distinct cultural and socio-economic divide. In a single afternoon one can see published professors and drug lords walking the same streets. Down the road from the pristine Hopkins campus, you’ll find run-down projects and condemned buildings. As exciting as city life has been, especially coming from rural America, it’s a wearying experience, and sometimes I miss the quiet country nights.