McCain has almost no chance against Obama in November 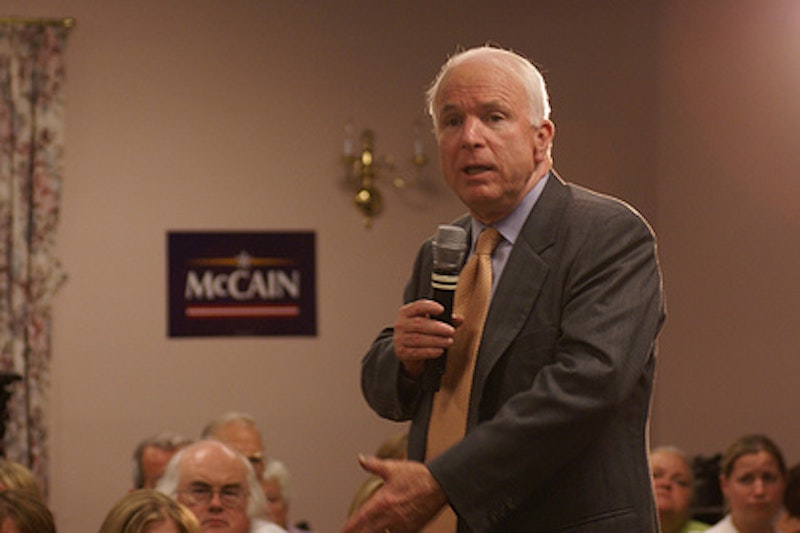 All vacations are good, although some are better than others. A truly great vacation is marked by the ability to all but forget the worries and stress of work and home awaiting your return. Then, before you know it, there are only three days left, then two days, and soon those concerns and anxieties creep back into your consciousness. And while you know the end is near and reality must soon be faced, another drink, another swim, or any of the other distractions of the trip allow you to ignore it all for just a bit longer. But you still know what’s coming on Monday morning.

If this sounds familiar to you or is something you’ve experienced, then you—regardless of political affiliation—know what it feels like to be a Republican today. Because Republicans, for the past two months, have effectively been on a vacation courtesy of the Democratic Party.

For Republicans, the best part of the ongoing nomination battle between Hillary Clinton and Barack Obama is that with the focus squarely on the increasingly hostile and internecine squabble between the two candidates, the GOP faithful have been able to temporarily forget the candidate that they will put forth against the Democrats’ ultimate victor in November.

A stronger candidate would be in a better position than tied with or slightly trailing Clinton and Obama in current general election polls. A GOP candidate with solid and sincere support from the party’s base would see his campaign coffers overflowing with contributions. Neither is the case for John McCain, however.

Despite the thumping that Obama took in Wednesday night’s debate and although it will “take a village” to convince Hillary Clinton to drop out, the reality is that this wonderful trip is coming to an end sooner than the GOP would like to think. Even if Clinton holds on to win in Pennsylvania, the latest polls indicate she’ll likely lose to Obama in both Indiana and North Carolina two weeks later, shutting down her presidential hopes, and putting an end to the Republican vacation.

Over the last two months, Republicans have delighted in watching Obama squirm under the uncomfortable scrutiny of the Rev. Wright controversy, then watched in amazement as the media seemed to forget it entirely while tripping over themselves to exalt his much-ballyhooed “More Perfect Union” speech about race in America. GOP voters again high-fived as the Illinois Senator stuck his foot in his mouth last week in San Francisco, declaring that small-town voters in Pennsylvania are “bitter” and “cling to guns or religion or antipathy to people who aren’t like them as a way to explain their frustrations,” then again watching as he apparently suffered no backlash in the polls as a result.

If Ronald Reagan was the “Teflon President,” many Republicans probably think they are seeing the closest thing to a Teflon Candidate in Obama. While the Senator’s vulnerabilities are apparent and likely not fully discovered, an honest Republican would admit that Obama shows every sign of being a winner. This is evident in the size of the crowds he attracts, the frenzy he whips those crowds into, and the staggering fundraising totals he has continued to post every month.

An honest Republican would also accept the reality that current political circumstances nearly guarantee a Democratic victory in November. President Bush continues to garner anemic approval ratings, the economy is hurting, and the war in Iraq remains very unpopular among the majority of Americans. Perhaps a legitimately compelling GOP candidate could overcome these long odds, but even then, probably only with the help of a horrendous (Michael Dukakis, Walter Mondale, John Kerry or worse) Democratic nominee.

McCain, though, is not a phenomenal candidate, and Obama has shown no sign that he would be a weak nominee—particularly if the liberal media remains in the tank for him, and a majority of voters continue to ignore some very real concerns about him, seemingly transfixed by his brilliant and eloquent (if empty) rhetoric.

Is an Obama victory a foregone conclusion? Of course not. A lot can happen between now and November—both geopolitically and on the campaign trail—that could alter the electoral landscape in ways impossible to predict today. McCain could catch fire somehow, or Obama could crash and burn. All of these what-ifs, however, are the stuff of happy thoughts born of the surf, sun and umbrella drinks the Democrats have given Republicans over the last two months.

Unfortunately for Republicans, when the alarm clock goes off on the last day of this getaway, they will awaken to the harsh truth that John McCain just doesn’t feel like a winner in November—a deep-down realization that while hard to accept, is impossible to ignore—even on vacation.