McCain's numbers go up, Obama's go down, and both deserve it. 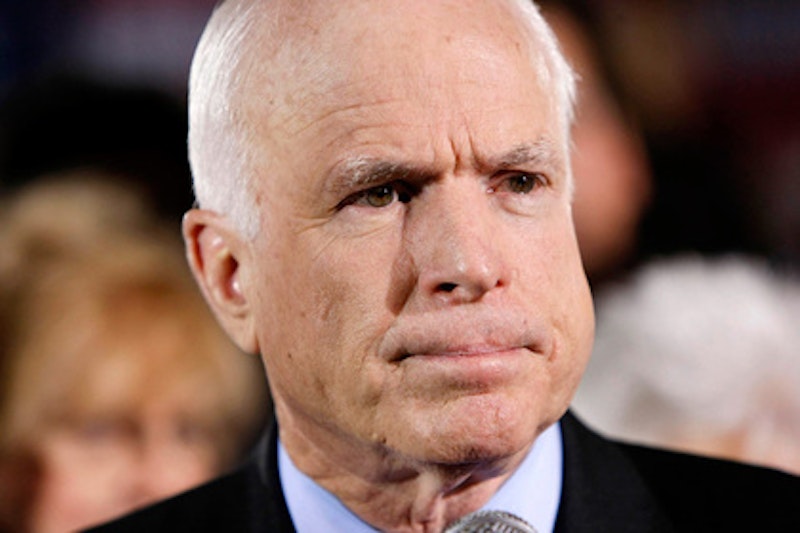 Barack Obama’s trip overseas last month was designed to bolster his commander-in-chief bona fides and show American voters how well regarded he was by our international allies. But the truth is that the trip was a mistake, and it in fact marked a turning point in the campaign at which John McCain began to gain momentum for the first time.

Obamamania reached a peak in July as Obama traveled overseas, first to Afghanistan and Iraq, then to Israel and Jordan, and finally to Berlin, Paris and London. The Illinois Senator was on a roll as he prepared to return, maintaining leads in the polls of anywhere from six to 10 points. As a Republican, I was nervous about the photo-ops that might result from the trip: Obama with smiling troops; Obama charming the leaders of Israel and Jordan; Obama received with open arms by European allies; Obama cheered by tens of thousands of Berliners gathered to hear him speak. The whole trip had a purposefully presidential appearance, but it now appears the campaign may have overplayed its hand. There were meetings with foreign heads of state, one-on-one sit-downs with all three of the major network news anchors, and there were even two separate occasions where the media caught Obama campaign staffers in verbal slips and had to remind them that their boss was not yet, in fact, the president. I believe many Americans were put off by the presumptuousness of a candidate taking what the McCain campaign smartly called “a premature victory lap.” Obama’s strategists must have recognized this too, since I have yet to see a single Obama ad featuring photos or videos from his travels.

Upon his return to the States, the poll numbers soon reflected Obama’s miscalculation. Initially expecting to receive a bump in the polls from the foreign tour, the campaign was surely disappointed to instead see the gap between Obama and McCain narrow. Here, too, began some real signs of life from McCain. While many in the media echoed the Obama campaign’s response that the “Celebrity” ad was silly or juvenile, McCain’s surrogate, Sen. Lindsey Graham pinpointed the ad’s purpose. Graham said the primary theme was to highlight the “hysteria around a personality that's attractive, but when you look under the hood there's not a whole lot there.” The ad was effective, and was followed up by another tongue-in-cheek McCain ad entitled “The One,” poking fun at the hero worship of Obama in some quarters that sometimes seems to border on religious fervor.

Not long after that, Obama was speaking to supporters in Missouri and speculated about the strategy he felt McCain and the GOP would use against him. “What they’re going to try to do is make you scared of me,” he said. “You know: ‘He’s not patriotic enough. He’s got a funny name. You know, he doesn’t look like all those other presidents on the dollar bills.’” McCain’s team reacted immediately, and with intensity, accusing Obama of “play[ing] the race card,” which seemed obvious.

Obama curious decided last week not only to give both Hillary and Bill Clinton separate primetime speaking slots at next week’s Democratic Convention, but also to allow Hillary’s name to be officially placed in nomination. While the joint statement released by Obama and Clinton touted this as a way to help unify the Democratic Party, it will actually do just the opposite by only perpetuating the divisions in the party, and perhaps more damaging, sustaining the discontent of the hardcore Hillary supporters who still seem reluctant to embrace Obama. This should be his convention and his alone, but instead he’ll now be largely sharing it with not only the woman he defeated in the primaries, but also her vitriolic and increasingly unpredictable husband.

Obama’s bumpy ride culminated this past weekend during a joint appearance with McCain at the Saddleback Civil Forum on the Presidency, moderated by Pastor Rick Warren, author of The Purpose Driven Life. The candidates sat down with “Pastor Rick” one-on-one, for an hour each. Obama went first, and the consensus from both left and right was that he did not fare well. He equivocated, he evaded, and he arguably gave poor and alarmingly shallow answers to some important and significant questions, such as the one he offered on the issue of abortion. He was asked by Warren, “At what point does a baby get human rights, in your view?” Obama responded, “Well, I think that whether you are looking at it from a theological perspective or a scientific perspective, answering this question with specificity, you know, is above my pay grade.” Regardless of one’s views on abortion, the issue is one on which a presidential candidate is expected to have a definitive opinion, and in the federal government, there is no “pay grade” above the president’s.

McCain, by contrast, had his best performance of the campaign thus far. He was energetic and forceful, warm and resolute in his answers as Obama was weak, aloof and wavering. As a Republican heretofore more opposed to Obama than for McCain, this was the first time I felt actively enthusiastic about the Republican nominee. I believe this was a crucial moment in this campaign because Obama’s dearth of experience—both political experience and life experience—was impossible to miss. The Obama campaign’s subsequent unsubstantiated (and since proven invalid) claims that McCain effectively cheated by possibly knowing the questions beforehand clearly show their recognition of the fact that their man was damaged by the drubbing he took at Saddleback. Of the many issues Obama has reversed himself on in the last several months—none of which the media have held him accountable for, incidentally—perhaps there is at least one flip-flop for which Democrats should breathe a sigh of relief. In May, Obama somewhat cockily expressed his willingness to debate McCain “anywhere, anytime.” The teleprompter more and more appears to be Obama’s oratorical pacifier, and had he kept his pledge and agreed to McCain’s June offer of 10 one-on-one town hall meetings, I suspect McCain might even be leading in the polls by now.

As of today, the race is very close—probably tied or with Obama leading slightly. As much as Obama has only himself to blame for a tumultuous few weeks and a statistically insignificant lead, McCain and his campaign deserve some credit, too. McCain seems to have awakened and has shown flashes of competent campaigning. Likewise, his campaign appears to have finally found a rudder, and to have developed a better understanding of how to best utilize the skills he does have, while avoiding situations not conducive to his strengths. Unquestionably, McCain has managed to gain control of the national “conversation” over the last few weeks, and he and his campaign have taken full advantage of the increased attention. Obama’s advantages remain numerous and daunting, and despite the last few weeks, the election is still his to lose. With that said, the stakes are about to reach the highest level yet, and the spotlight will never be brighter. Can Obama close the deal? A month ago I’d have said yes; now I’m not so sure.