The voter registration problems in this country extend far beyond one little nonprofit, and the government should be ashamed of itself. 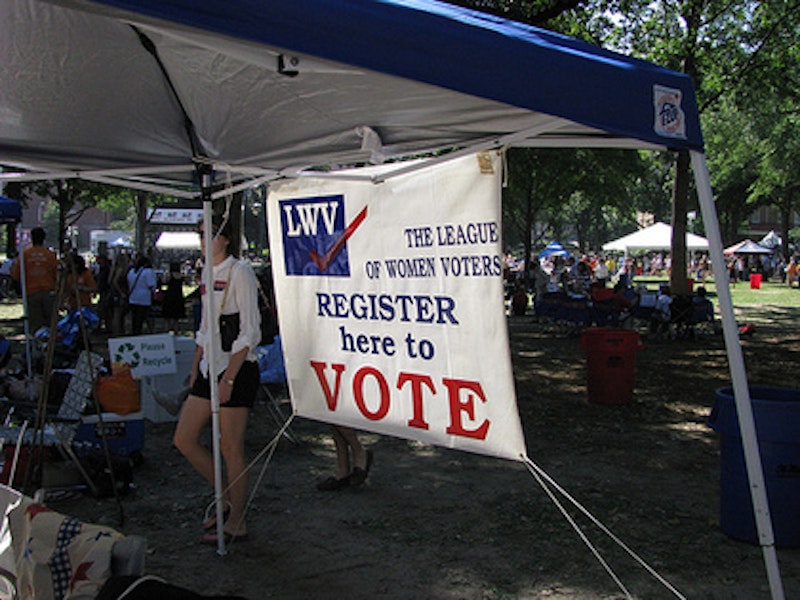 For some, open markets and free enterprise are the best solution to anything and everything. Put simply, the tides of supply and demand are better left alone, without government intervention. Let the markets find the solutions for our problems. Of course, we've witnessed the passage of the Wall Street bailout plan, and the Bush Administration is looking into throwing a chunk of money at General Motors and Chrysler to facilitate a merger. The underlying notion is that some financial institutions, banks or industries are "too big to fail."

The right to vote is this country has a history marked with racism, sexism, violence and triumph. It is one of the most important institutions in American. And yet for all our vaunted "universal" suffrage, the American public has witnessed, through the decades, corruption, suppression, political machines, vote tampering and the like. You don't have to be a Democrat to understand the fallacy of the 2000 election, and you don't have to be an ACORN supporter to see the disenfranchisement of the poor and minority sections of the electorate. The right to vote truly is too big to fail, and yet we've watched that right suffer from dilution and a lack of comprehensive reform.

In a twist of irony, it's taken a third party—the market, if you will—to address one basic cornerstone of voting: registering, and knowing where, to vote.

About a week ago, Google launched its US Voter Info site, with the statement:

At Google, we pride ourselves on helping people find things on the Internet. And every four years in America, Google Trends shows that people are searching to find voting information, like how to register and where to vote. It's hard to believe that in 2008, information so important to U.S. citizens and the democratic process isn't well organized on the web. To solve this problem, we've released our US Voter Info site, an effort to simplify and centralize voting locations and registration information.

It’s sad, and somewhat astonishing, that a major corporation felt obliged to address an issue that should be the government's responsibility. An interesting comparison can be found in the freewheeling T. Boone Pickens, the billionaire oilman waging a personal war against the US's dependence on foreign oil. One wonders if Pickens' campaign is a victory for free markets or a slap in the face of a government (and both presidential candidates) that thinks offshore drilling is a viable solution to our addiction to oil. But energy and voting differ in that one is a market, the other a right. The latter requires a systematic overhaul.

Earlier this summer I argued at length that a hypothetical Barack Obama administration would have a profound effect on the streamlining of American government through the use of the Web and other technologies. In late September, at the first presidential debate, the Illinois senator mentioned how America needed to improve not just our roads and bridges, but also our broadband access and our energy grids to adapt to, one hopes, alternative fuels.

It's a shame, though understandable, that Obama hasn't reiterated his technology platform, as it might resonate with a public witnessing the breakdown of financial markets on a near weekly basis. And given the ACORN-/voter registration-based attacks (and the fact that the election is only a few days away), Obama probably doesn’t want to call any more attention to the issue. In fact, he could use Google’s approach as a way to frame the dialogue: The government’s digital infrastructure is so bad (or non-existent) that third parties are coming in and doing our job for us. Now, I know there are many small-government proponents out there, but safeguarding, to use John McCain’s words, the fabric of our democracy shouldn’t be seen as a big vs. small government issue. It’s a deeply fundamental problem.

Talking Points Memo compiled a list of “Republican voter suppression” efforts. Whether or not you agree that the Republican Party makes a point of suppressing votes, or that there is systematic voter fraud (completely unproven), I hope all partisans can agree the system is cracked. Slate’s Richard L. Hasen argues that the voter registration process should be nationalized. I completely agree. Every year the situation gets worse:

When it comes to charges of "voter fraud" and "vote suppression," each election is worse than the last. This year, John McCain has claimed that some fraudulent voter registration cards turned in by ACORN employees threatened the "fabric of democracy." The Obama campaign has sent letters to Attorney General Michael Mukasey accusing Republicans of deliberately trying to suppress the vote.

Reform needs to come in many, many forms. Google’s database is a first step, though the government should be embarrassed by it. One hopes that shame will translate to action.

Now, how about that Electoral College?