Barack Obama's techno-political revolution could have serious effects on the literally crumbling aspects of our nation. 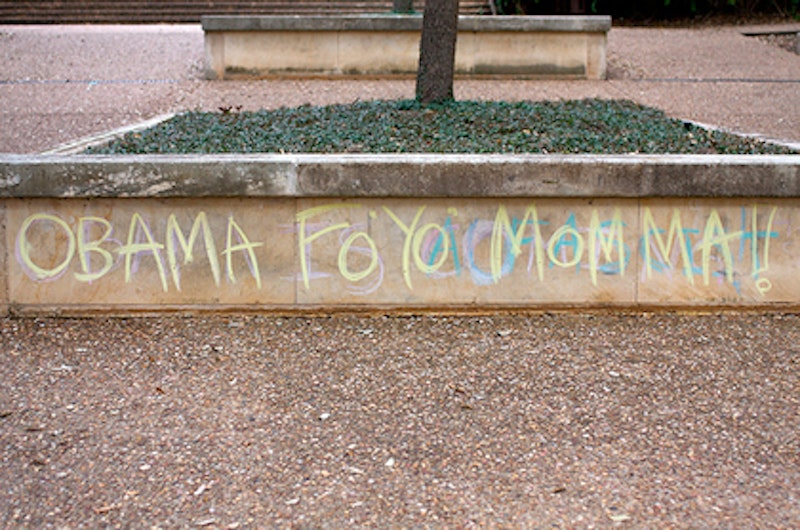 One of the best pieces The New York Times ran about the presidential race appeared on March 2 of this year. They gave the conquered candidates some space to talk as if they were still campaigning. Tom Tancredo, of course, brought up immigration. Sam Brownback meandered through his headspace with a "talk" on keeping families together. From the Democratic Party side, Dennis Kucinich and Bill Richardson went after the economy, specifically homeowners and the subprime mortgage crisis.

Chris Dodd dropped a rhetorical bomb on a mundane issue. Leading with the tragic Minnesota bridge collapse and the subsequent revelation that 160,570 of our bridges are in the same dangerous state, he wrote this: “With every bursting pipe, potholed road and derailed train, the conclusion became inescapable: America’s backbone is decaying.”

You’d think that in D.C., a city teeming with tens of thousands of federal employees, you could rely, Mussolini-style, on the trains always running on time. The Orange line broke down three different times, with three different excuses, the other week. D.C. used to average one pothole per block—except for the block the mayor lived on. One year, when I was in elementary school, the D.C. government replaced all the decaying pipes in my neighborhood. I watched these great, hulking things, like relics from the Civil War, get lifted out of the earth, covered in rust and grime. You would know election season was at hand when the streets were filled with asphalt spewers and orange drums. It’s politics at its simplest: fix up a few busted blocks and one flash of annoying minutia in your daily life is gone—and you definitely notice it.

Infrastructure: The musculature and the hangover of everyday life. There are the illustrious departments of motor vehicles, the city hospitals and the taxes and the other big kahunas of public infrastructures. We simply deal with them, grateful that at least there aren’t white-gloved men waiting to shove us into the trains or, for the most part, we have roads fit for automobiles.

I’m the son of a bureaucrat. My mother has worked in the federal government for over 30 years and I have listened to her extol and condemn, berate and praise, her job. The issue of employee accountability comes up again and again in the form of malevolent, ego-tripping peers and shady business practices. That doesn’t discount the many wonderful things she and her department have accomplished—but the same scenario is found in public schools (I slogged through the same system as Splice writer Gabriel Baker), where deplorable teachers are virtual time sinks of growth. They bump elbows with the brilliant ones who inspire and nurture.

From potholes to public schools, there will always be something to complain about. Sometimes the heat in D.C. is so bad the train tracks melt and there’s nothing anyone can do about it (well, except make the situation worse). Still, D.C.'s—and this country’s—infrastructure is in dire need of a good shakedown: above all, we deserve a more streamlined daily life.

Trimming that fat has a cousin in the always politically solvent platform of eliminating pork-barrel spending—the extraneous, tangential earmarks that are tagged onto whatever bill happens to be near voting time. These earmarks often siphon money to businesses and special interests in a particular congressperson’s home state. Or they return favors and give kickbacks to lobbyists—they’re the kind of backroom politicking we all fear.

Senator John McCain is fond of this particular platform. The Washington Post cited him as one of five senators who rejected all earmarks; compared to Senator Barack Obama’s $320 million worth of total pork, McCain comes out the “winner.” Obama posted his earmarks on his Senate website. There aren’t any bridges to nowhere, thankfully. What are there are mostly humdrum municipal projects that serve the greater public of Illinois. Sometimes the public needs its senators to delicately slip in a few tens of millions of dollars in order to keep their cities running—that’s a farthing compared to the billions disappearing, unaccounted for, in Iraq.

That wasteful spending does occur, no one disputes—that congressmen and congresswomen find it necessary to play “pin the earmark on the bill’s ass” is the frustrating reality. But pork barrel spending is not the money sink McCain would have you believe. Eliminating earmarks would do little good in the long run and a lot of bad in the short run, as municipalities and states flounder to find the cash to keep public services afloat.

There’s certainly fat to trim, but it’s not all found in earmarks.

Last week, I wrote on the epic differences between the McCain and Obama campaigns—specifically, in their approach to multimedia platforms. There is an important debate to be had—not about how campaigns are run, but about how this new world of Facebook and YouTube videos is actually the pop-culture vanguard for a storm of sweeping bureaucratic revolution. Obama, in his mastering of the socio-technological zeitgeist, is poised to deliver these changes and in the process, one-up McCain on the issue of “trimming fat.”

Obama has taken the position of making governmental data (environmental data, for example) open to the public for dissemination and analysis on a local level. He is for broadcasting public health care negotiations as well as the business of all the Executive Branch departments on C-SPAN. In a move that McCain would probably support, Obama proposed a central Web site and search engine that the public can use to easily track down “grants, contracts, earmarks, and lobbyist contacts with government officials.” Knowledge is power.

Obama crystallizes his commitment to technology as a crucial (and currently lacking) government tool in his proposed plan to appoint the nation’s first Chief Technology Officer. As well as updating and streamlining existing networks and facilitating inter-agency connectivity, the CTO “will have a specific focus on transparency, by ensuring that each arm of the federal government makes its records open and accessible as the E-government act requires.” This would include “the development of a national, interoperable wireless network for local, state and federal first responders as the 9/11 commission recommended.” (Recall the horrific break down in the response to Hurricane Katrina.)

A key part of Obama’s health care plan lies in the digitization of records. As his website points out, a study by the Rand Corporation found that “if most hospitals and doctors’ offices adopted electronic health records, up to $77 billion of savings would be realized each year through improvements such as reduced hospital stays, avoidance of duplicative and unnecessary spending, more appropriate drug utilization, and other efficiencies” (emphasis mine). That he plans to use the Veterans Health Administration—remember the Guantanamo-sized shame that was Walter Reed?—as the vanguard for this type of reform is a smack in the face to the sitting politicians who have let our returning soldiers suffer medical indecency.

Imagine: a window of five days to review and comment on any piece of legislation that is on the president’s desk; a requirement that Cabinet officials have public town hall meetings to discuss issues and parse policies; stimulating public education with “Public Media 2.0,” an initiative to “create the Sesame Street of the Digital Age and other video and interactive programming that educates and informs.” All this falls under Obama's masthead. McCain, who unlike Obama does not include a Spanish translation of his website, doesn't have a section for technology issues, aside from environment-centric positions.

Coupled with an endlessly burgeoning blogosphere, hyper-accelerating niche communities and an overall upswing in national online activity, Obama’s initiatives could change the very nature of the term “civic involvement”; this time, we really are asking what our country can do for us, so that we are best equipped to do what we can for our country—or, at least, Obama is doing the asking and the answering for us.

Obama will provide the modernization for our sprawling infrastructures: bureaucracy as we know it may never be the same. There is reason to believe that Obama will clean the pipes underground and the pipes in the Internet. This is not standard public policy—the blunt, fiercely partisan packages that rarely made it through the House and Senate. This is policy in its most immediate and relevant capacity, addressing issues that gum up the system for all. I’m not asking Obama to make the trains run on time, though that wouldn’t be a horrible thing to have happen. I’m asking him to raise the technological bar in this country, one infrastructure at a time.