"Surgically changing the color of your skin and the texture of your hair simply for political gain is 100% not-cool, and I have always felt that way." 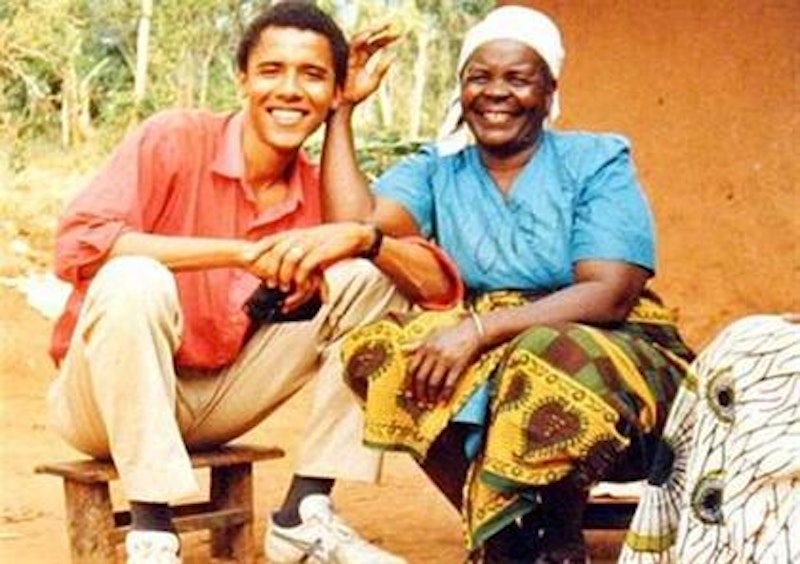 Obama and his Kenyan grandmother.

Why can’t I hold these beliefs? After all, I’m just following the same logic as those who have stated, and continue to state, that Barack Obama would not be in the position he is in right now if he were not an African American. Geraldine Ferraro ran into trouble for making such a claim, but she’s not the only one who feels this way.

I’m not writing this article to agree or disagree with this belief. The truth is that I haven’t even gotten to the point of agreeing or disagreeing with it because I keep getting caught up in how stupid and pointless such a statement is.

Let’s backtrack and explain the complicated process behind race and ethnicity: Obama’s father, a black man from Kenya, had intercourse with, or “banged,” the Senator’s mother, a white woman from Kansas, and when Obama was born he had brown skin. That’s it. If you got lost along the way, go back to the beginning this paragraph and start over. Now, if new information was discovered that Obama was born with white skin and then physically altered his race at some point in his life, then I promise Ferraro and those of her ilk that I will personally lead the charge against him. Surgically changing the color of your skin and the texture of your hair simply for political gain is 100% not-cool, and I have always felt that way. That’s why I have never supported Michael Jackson in his numerous campaigns for public office.

In sum, people who make this claim are saying that physical attributes, over which you have no control, will have an effect on the course of your life and your career. The purpose of saying this is… well, come to think of it; I don’t really know why people say it. I guess the point is to make Obama feel guilty that he’s black? Maybe they’re trying to make his supporters feel guilty that they are voting for a black man? I find it hard to believe that Obama’s skin color is more helpful than it is harmful in this country. Hell, we even have media outlets running headlines like “Is America Ready for a Black President?” which is pretty racist in and of itself.

The implication is that Obama hasn’t had to work as hard as a white candidate to get where he is right now, despite the fact that we have had many African American presidential candidates who haven’t garnered the kind of support which he has (Alan Keyes has learned the hard way that just being black does not necessarily help you when you are also a little bit crazy). You don’t get to be the Democratic nominee for president and leading in nationwide polls simply by being black—otherwise, we would have elected P. Diddy president a long time ago. Ma$e could have balanced out the ticket nicely as the vice presidential candidate.

So, Barack Obama is an African American, and he is running for president. Where would he be if he were white? I’ve got a better question: Who cares? He’s not white nor will he ever be. It’s a fruitless exercise. Ironically, Ferraro made the statement while working for the Hillary Clinton campaign, and there were certainly people saying that Clinton wouldn’t be where she is if she wasn’t a woman. I wouldn’t be where I am if I wasn’t white. John McCain wouldn’t be where he is if he hadn’t gone to school with Abraham Lincoln. All kidding aside, it’s just as pointless to ask where would McCain be if he had not been a prisoner of war.

Statements like these are silly distractions that take our focus away from real policy differences between the candidates. Consequently, we end up with windbags going on and on about whether Obama would be the Democratic nominee if he weren’t African American and douche bags writing articles analyzing the question… Oh shit… On second thought, don’t read this article.