If only one of our country’s great nonfiction talents would stick to writing. 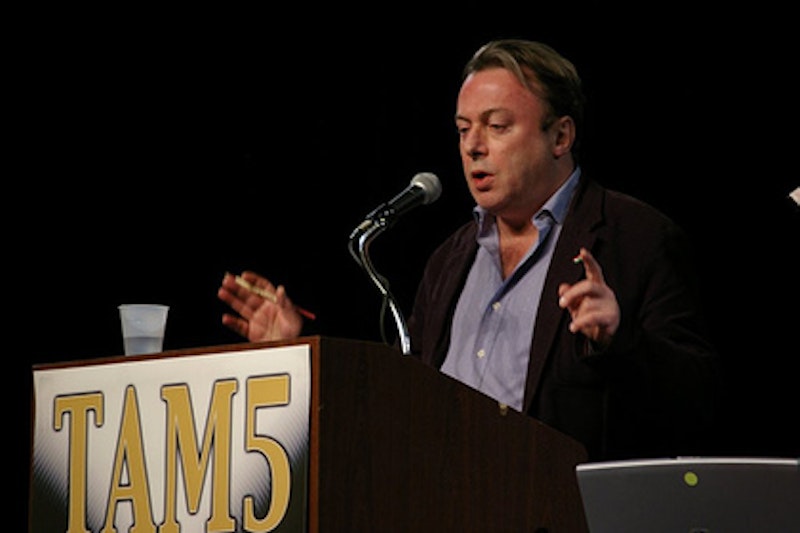 Disagreeing with Christopher Hitchens—who is, after all, a pugilist above all things—is a simple reality of reading the man’s work, and often a main benefit of it; few critics can get the blood boiling while still commanding the reader’s admiration for the writerly craft behind his screeds. His atheism, for instance, seems generally agreed upon by many members of my generation, but his criticism often comes off as intolerance for all things religious, which hasn’t yet become fashionable. Regardless of one’s affinity for his opinions, the most redeeming of Hitchens’ qualities are all on the page, in the wit with which he writes. His is a polemical style in the distinctly English mode—at once acerbic and decorous, his humor always winking rather than screaming. Where else in mainstream American media will we read a comment on Paris Hilton that includes, “I, too, have watched Hilton undergoing the sexual act […] At no point did her facial expression match even the simulacrum of lovemaking.” It comes as no surprise when he repeatedly stresses the greatness of Orwell, Wodehouse, and Waugh in his book criticism.

I’ve been a devoted reader of Christopher Hitchens’ journalism for years now, whether his longer pieces in Vanity Fair, book reviews for The Atlantic Monthly or The New York Times Book Review, or his Slate column “Fighting Words.” I’ve read his essay collection Love, Poverty, and War and kept close tabs on the avalanche of press and interviews that greeted the publication of his atheist diatribe God is Not Great: How Religion Poisons Everything. I’ll even admit to emailing Hitchens, who lives in nearby Washington, D.C., to see if he would meet me for a drink and discuss the writing life, a request that as of yet has inspired no response, and understandably so.

Hitchens’ appeal—particularly to the class of young-white-male would-be intellectuals and journalists to which I can’t help but claim membership—is the sheer volume and force of his opinions, as well as the persona they advertise. To write as floridly as Hitchens is impressive enough; to do it for multiple outlets and with his astounding prolificacy borders on superhuman. And the gall of the man seems designed to impress the members of my tribe: the way he willfully claims expertise on English and American history, Proust, Joyce, Islamic law, Christian theology, gastronomical mores, the Clintons, Bob Dylan, and the Hilton heiress; his friendships with Salman Rushdie, Ian McEwan, and the Amises Martin and Kingsley (he even claims to have slept with Martin’s sister in the 70s); his tales of personal meetings with Saul Bellow and Jorge Luis Borges; his public squabbles with Norman Mailer, The Nation, and Conrad Black. Hitchens is the kind of prodigious intellect- and character-on-display that appeals to the group I described above. He nourishes the insecure part of our brains that is impressed by a man of such certainty and superiority because it gives us false hope for ourselves. That he does it all while drinking a bottle of Johnnie Walker a day and smoking, by his own estimate, 15,000 cigarettes a year, is almost too romantic to be believed.

So perhaps it’s me who’s changed. Maybe (hopefully?) it’s me who’s matured to where I can appreciate Hitchens for what he actually is: a very talented writer, a very smart man, and a loathsomely self-absorbed journalist. But I can’t give myself all the credit, since Hitchens himself has been upping the ante for his own self-importance standards for years now, most egregiously in a recent Vanity Fair piece called “Believe Me, It’s Torture.” At the behest of VF editor Graydon Carter, and with a political twist on his earlier Vanity Fair piece about his experience at a spa, the writer was voluntarily waterboarded to settle, once and for all, whether this controversial interrogation technique constitutes torture. The answer’s in the article title.

Here, Hitchens gets to combine all of his preferred topics: politics, moral certitude, linguistic overstatement, and himself. He even gets in the customary Orwell reference for good measure, likening the experience to 1984’s climactic torture scene. Additionally, he indulges his inner Graham Greene: “[T]hree layers of enveloping towel were added. In this pregnant darkness, head downward, I waited for a while until I abruptly felt a slow cascade of water going up my nose. Determined to resist if only for the honor of my ancestors who had so often been in peril on the sea, I held my breath for a while and then had to exhale.”

The spa piece, self-mythologizing as it may have been, was what it was. Capitalizing on Hitchens’ newfound post-God is Not Great public recognition, the editors of Vanity Fair played up his boozy character and had him pump out a puff piece good for some easy publicity. “Torture,” however, utilizes the same kind of Plimptonesque stunt journalism conceit in service of Hitchens’ typical moral superiority. “I apply the Abraham Lincoln test for moral casuistry,” he writes. “‘If slavery is not wrong, nothing is wrong.’ Well, then, if waterboarding does not constitute torture, then there is no such thing as torture.” Case closed, folks.

Setting aside the silly, questionable belief that a person has to undergo something in order to denounce it as immoral (unless, that is, you’re looking for more easy publicity), why would anyone think that this experiment comes close to reenacting actual waterboarding as experienced by prisoners of war? But fear not; Hitchens has the false modesty to allay you:

It goes without saying that I knew I could stop the process at any time, and that when it was all over I would be released into happy daylight rather than returned to a darkened cell. But it’s been well said that cowards die many times before their deaths, and it was difficult for me to completely forget the clause in the contract of indemnification that I had signed […] there would be safeguards provided "during the waterboarding process, however, these measures may fail and even if they work properly they may not prevent Hitchens from experiencing serious injury or death."

For all his claims to have settled the “torture/not torture” debate, however, a host of other journalistic questions are raised by the article, never to be answered at all since doing so would be to confront the man’s monolithic ego. If “it goes without saying” (and it does) that Hitchens’ experience in no way mirrors that of actual detainees, why bother with the pomp and circumstance of his being blindfolded and disoriented, other than the photo op it offers? (Vanity Fair's website also has video of the event, bookended by further Hitchens pontification, in case the article’s 2700 words aren’t enough for you.) Why, if Hitchens were truly so horrified for his life, would he undergo the drowning process a second time just to try and best the purported two-minute holdout of 9/11 mastermind Khalid Sheikh Mohammed? “No Hitchens is going to do worse than that,” he rationalizes.

But as in any recent Hitchens piece, the biggest question raised is: How come, since the guy alludes to such pressing intellectual issues, the main focus is steadfastly on himself? This goes beyond the use of the first-person pronoun, although he’s overly generous there, as always. Rather, why all the asides about his upbringing (“I do have a fear of drowning that comes from a bad childhood moment on the Isle of Wight”), the slight medical conditions used only the heighten the perceived danger (“If I don’t have at least two pillows I wake up with acid reflux and mild sleep apnea, so even a merely supine position makes me uneasy”), or the inappropriate attempts at gallows humor (“[An expert] told me that he’d heard of someone’s being compelled to confess that he was a hermaphrodite. I later had an awful twinge while wondering if I myself could have been ‘dunked’ this far”)?

It’s confusing that Hitchens seems so intent on being his own literary character because he’s otherwise usually content to pass the intellectual buck in his articles. In his dismayed account of Saddam Hussein’s botched execution, for instance, he makes the fairly obvious point that the event was an atrocity and a shame to America’s mission in Iraq, and then provides a helpful link to a similar and far superior 1945 essay by Orwell called “Revenge is Sour.” And in a Vanity Fair piece from November, he tells the story of a young man who went to and died in Iraq partly because of Hitchens’ own endorsement of the war. The essay is almost unavoidably a heartbreaking one, but here of all places, Hitchens lets his thoughts on his own accountability go unsaid and instead lays on the honorific Shakespeare excerpts. This is apparently the Hitchens way—make loud, forceful claims about current events, then pull a book from the shelf to let an older, more creative writer do the heavy lifting. In the waterboarding essay, Hitchens says (shockingly) that the procedure is awful and certainly constitutes torture, then offers a series of block quotes from two noted pro- and anti-waterboarding writers. Thus the article is all about Hitchens in every way but the meaningful one.

“Believe Me, It’s Torture” adds nothing to the public conception of what waterboarding is. Instead, we now know only about Christopher Hitchens’ personal experience with the physical realities of the event and his concurrent moral judgment. And what exactly is Hitchens now authorized to say about the physical experience that he wouldn’t have gleaned from merely reading an essay by an actual detainee? Not much, other than that it’s so excruciating, even he of the prodigious intellect and imbibing abilities was brought to his knees—although not, mind you, to the point of admitting he was a hermaphrodite, because it’ll take more than near-death for a man this self-aggrandizing to admit he’s not well hung.

It’d be presumptuous to implore Hitchens to tone down his act, as well as ignorant. Not only is self-righteousness a standard part of his work, it’s what he’s selling. Rather, I’m merely sad to see such a talented writer resign himself to being a public spectacle, even a brand name. The sorriest thing about “Believe Me, It’s Torture” is how not unique it is. Of course Hitchens would agree to such a promotional stunt, and of course he would simultaneously puff out his chest and espouse faux humility in his writing about it. Love him or hate him, Hitchens was at one point a genuine Renaissance intellect and an intrepid journalist, and while he remains those things, he’s apparently impressed enough with himself to overshadow them both. Vanity fair indeed.