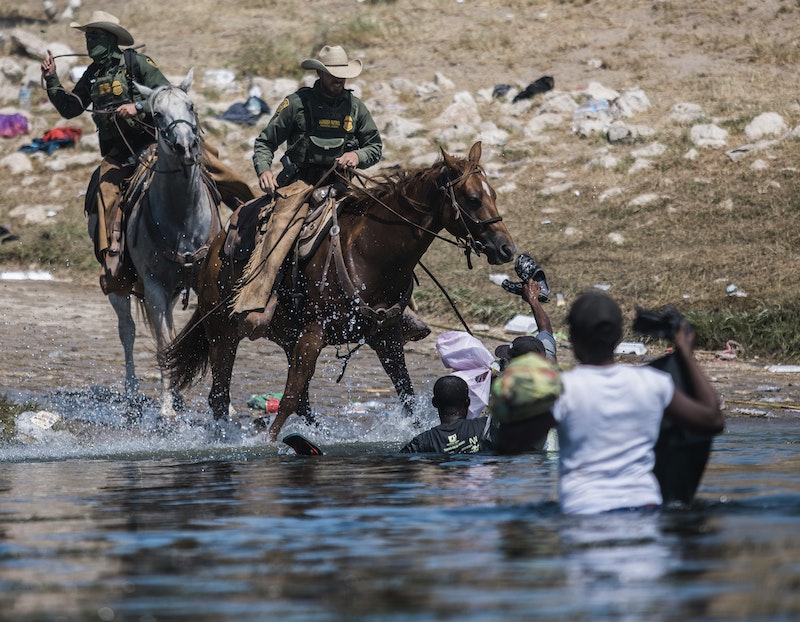 On September 19, a photograph of a white U.S. Border Patrol agent grabbing a black Haitian man by the back of his shirt sparked outrage on the Left. Sloppy journalists said the long reins that the agent on horseback was holding was a whip he was using on refugees. The story blew up. For days, top Democrats and the media were up in arms over alleged abuse of migrants at the Mexican border.

Joe Biden eventually took the bait, and threw a federal agency he oversees under the bus without the slightest due diligence. Addressing the nation, the President promised that he was going to hold the Border Patrol accountable for "strapping" Haitian refugees at the Mexican border. "This is not who we are," he added. Vice President Kamala Harris, not to be outdone in the faux-outrage department, said that the situation—cops "whipping" black men—reminded her of the days of slavery. Rep. Maxine Waters (D-CA), one of the loosest cannons in Congress, outdid herself by describing the incident as "worse than what we witnessed in slavery." Considering the fact that American slaves used to be whipped, shackled, beaten, mutilated, and branded, that's a preposterous claim.

The U.S. Border Patrol, along with every other American law enforcement agency, isn’t armed with whips, which Biden could've learned with a phone call. The photographer who took the photo said he didn’t see any agents whipping people. No witnesses came forward to say they'd seen anyone get whipped. The worst thing that happened, according to liberal-leaning Snopes, is that one agent used a rein to menace migrants "by spinning it in a lasso-like motion."

Despite the facts, the falsehood that white men were whipping black people will live on in the progressive world, just like the fairy tale that Michael Brown said, "Hands up, don't shoot" in Ferguson, Missouri in 2014 before a cop shot him to death endures to this day, despite a federal investigation that proved otherwise. Facts no longer matter to progressives now that their movement has morphed from a reason-based ideology into a faith-based religious movement.

Facts are the enemy of any faith-based belief system. They're inconvenient, so they get explained away, or just ignored. When a belief system is based on dogma rather than reason, which is the case for the current iteration of progressivism, trickery is needed to bridge the gap between the dogma and the truth. In the post-George Floyd era, the progressive dogma is that all white cops are racists. That's why Biden's press secretary, Jen Psaki, said she found the incident to be "horrific," even though nothing horrific happened. She was bridging the truth gap with a falsehood, knowing that her version of the story would be welcomed without scrutiny by her target audience. The incompetent Biden administration has now banned the use of horses by the Border Patrol due to a story that's been debunked. Once again, the truth doesn't matter, and the USBP's lost a valuable tool for the challenging work it does.

Progressives have developed several strategies aimed at discouraging people from questioning their faith. They redefine words to their liking, or they'll call you a "racist" if you contradict one of their talking points. Portland State University, which should be encouraging open debate, issued a faculty resolution stating that criticism of Critical Race Theory is a type of "harassment," which is essentially a blasphemy regulation. Muslims aren't allowed to question the Qur'an, and Portland State students are forbidden from criticizing CRT with their own ideas. And that school isn't the only American university that looks more like a religious institution than one of higher learning.

Portland State president Stephen Percy said in January that racial justice is his top strategic priority—not excellence in teaching or research—which fits in with the faculty resolution on criticizing CRT, the de facto "faith" on that campus. Any faith-based belief system that can't be fully supported by facts—whether it's Catholicism, Islam, or CRT—requires mechanisms for making up for that shortage. Outrage is one of those mechanisms. If a CRT devotee claims to be offended by someone questioning their faith, the questioner can be successfully accused of harassment.

Free speech has become the enemy of modern progressivism, and the truth has been sacrificed for power. If you're a powerful newspaper like The New York Times, why stick to the truth when you can publish the widely-debunked 1619 Project and still win a Pulitzer Prize? If you're MSNBC's Joy Reid, why stop claiming that cops are killing unarmed black people at an alarming rate when doing that is a career booster for?