As a conservative (but not a Republican), I think there should be some sort of public option, just like in every other highly developed country. 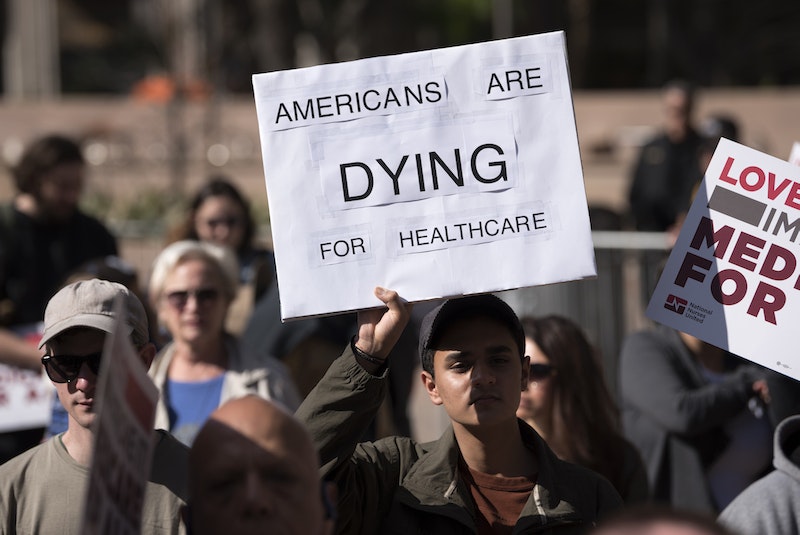 A handful of Republican politicians support/tolerate universal healthcare. Maybe it could help them politically. Christina Nolan is perhaps the most interesting example. She served as the U.S. District Attorney for Vermont under President Donald Trump. A Republican, she’s running for an open U.S. Senate now that longtime incumbent Patrick Leahy isn’t seeking re-election. Many people don’t know this, but Leahy, first elected to the U.S. Senate in 1974, is the only Democrat to win an election for this job in Vermont history. Vermont used to be a liberal Republican state; Jim Jeffords, a Republican-turned-independent, was the state’s junior Senator before Bernie Sanders ran for the open seat in 2006. And Sanders is an independent—a self-described democratic socialist who caucuses with the Democratic Party.

Here’s why that matters. The national Republican Party (incorrectly) thinks that they have a shot at winning this Vermont seat. Also, Nolan’s a moderate Republican who says she supports a Medicare-like public option. It's a surprising answer from a Republican. However, running on repealing Obamacare in Vermont definitely wouldn't work. The Republican state legislators in my state (Massachusetts) avoid talking about even the unpopular parts of Romneycare, including the individual mandate.

If Nolan runs against a dogmatic progressive, could that win some votes? A public option polls better than Medicare-for-all, and healthcare tends to be a losing issue for Republicans. In 2018, healthcare was the top issue for voters. Republicans lost many U.S. House seats that year and lost some U.S. Senate races to red-state Democrats in West Virginia, Arizona, Montana, and Ohio; they also had predictable losses in swing states like Pennsylvania, Michigan, and Wisconsin. The other notable example is Jesse Jensen, a candidate for the U.S. House seat in Washington's Eighth District. He ran a competitive race in 2020 and lost (51.7 percent to 48.1 percent). Those numbers tell us he has a chance to win this year. He’s said that he supports universal catastrophic coverage.

UCC would automatically enroll people in high-deductible plans where the deductible would be a percentage of their income (possibly on a progressive, sliding scale). It would cover massive health expenses, preventing people from going bankrupt or having to sell their homes, but they’d pay for many routine health expenses themselves—unless it was deemed cost-effective preventative care and made sense for the state to pay for it (like how coronavirus vaccines were free).

People could make up the difference with health savings accounts or by purchasing supplemental insurance. It also offers people savings because paying for health expenditures with cash is cheaper than using an insurance company. Additionally, a pair of U.S. Senators, Susan Collins of Maine and Bill Cassidy of Louisiana, offered a path for states to provide universal catastrophic coverage in 2017. Their Patient Freedom Act went nowhere, but it took a federalist approach to health insurance. States could keep the Affordable Care Act, repeal it and lose federal insurance/Medicaid expansion subsidies, or automatically enroll uninsured residents into a "federally subsidized catastrophic plan."

As a conservative who’s not a Republican, I support some form of a public option. It sounds more appealing than Donald Trump evading the question when asked about his healthcare plan. Many Republicans don’t have a good answer for what we do about the uninsured. An elected official I know once told me that if people want health insurance, they should get a job that offers it. That’s great, except he told me this in 2020—the year that we all saw that employer-sponsored health insurance is a bullshit system derived from World War II wage controls (non-monetary benefits were exempt). If someone has a robust plan through their employer, good for them. However, when millions of people lose their jobs (and insurance) during a pandemic, one should question the system.

People can't perform open heart surgery on themselves; healthcare, unfortunately, is what many economists call a market failure. Markets can help lower costs (price transparency, prescription drug imports, certificate of need reform, etc.), but when someone needs to go to the emergency room, competition won't just kick in and lower prices. Also worth noting: Democratic plans for universal healthcare might gain more support if they do a couple of things differently. They put poison pills in their proposals. I'm not going to support a bill that covers abortion, euthanasia, sex changes, and illegal immigrants.