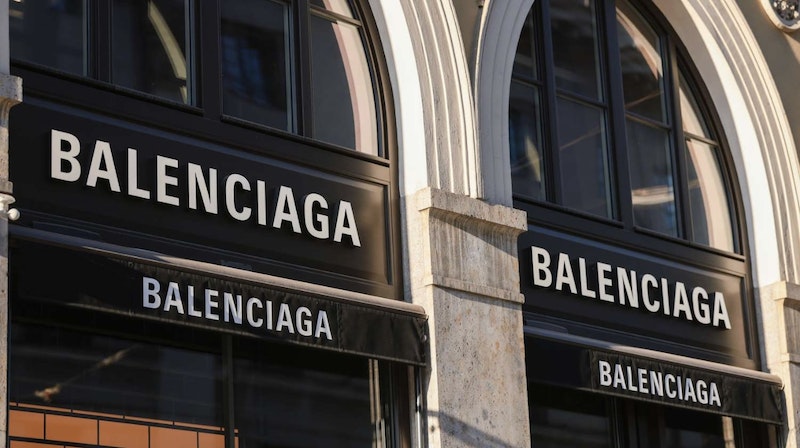 Balenciaga, the decades-old Parisian fashion brand, founded in 1919 by famed couturier, Cristobal Balenciaga, is embroiled in controversy after two of its ad campaigns featured unsavory content. Their Rodeo Drive, L.A., and Bond Street, London, locations have been vandalized, and angry former customers are destroying their products in social media posts viewed by millions. The past few weeks— replete with numerous official statements of apology and disavowals from the brand as well as their collaborators— has proven that not all publicity is good publicity.

Their Spring ‘23 campaign was shot in an office in New York’s Financial District, and has been scorned over its inclusion of what many have called “cryptic” messages about child abuse. Text from the 2008 Supreme Court case, United States v. Williams—which upheld the constitutionality of certain anti-child pornography laws and convictions—was scattered behind an “Hourglass” bag from the brand’s joint collection with Adidas. A copy of the book Michaël Borremans: Fire from the Sun by Michael Bracewell, with images from the series "Fire from the Sun” that depicts toddlers in violent scenes including those in which they appear castrated— is seen on a desk in the background. This campaign was produced by North Six Inc, an international production company, which worked with Nicholas Des Jardins, a set designer with regular high-end clients.

Far-right, QAnon-style conspiracy theorists have had a heyday with this colossal failure of ethics and communication from a famous, luxury brand. Satan worship, gromming, and human trafficking are just some of the supposed hidden agendas they’ve been hawking to the public. Aside from the most extreme commentators, however, these two campaigns have disgusted and riled people up, regardless of faith or political affiliation; from both the left and the right, religious and secular alike.

The collective air of disgust under which Balenciaga currently finds itself makes it the perfect case study for fundamental discussions on the definition of the concept of Fashion, and its role in society. As short as it may be in Balenciaga’s century-long history, this controversy broaches several major topics that often come up in conversations around fashion: art, ethics and accountability, and cancel culture. How do we assess fashion’s relationship with these concepts, and why?

Although it is a creative endeavor, “is fashion art?” is a common, contentious question. Photography is considered a medium of art, yet fashion isn’t often given the same consideration. Galimberti’s photos, including his playful “Toy Stories” are art; does the inclusion of BDSM-style objects make it any less artful? Does Michaël Borremans’ gruesome depictions of children make his paintings less artful? Likewise, if we were to remove the inappropriate objects, and just have a respectful, cute, but Balenciaga-branded version of his previous work, does that qualify as art? Or does fashion’s industrial veneer cause people to interpret it differently than other creative fields?

In the beginning, Balenciaga apologized for “causing offense,” noting how the teddy bears shouldn’t have been used, and for “displaying unsettling documents.” They also noted that they'd be suing the “parties responsible for creating the set and including unapproved items,” notably absolving themselves of responsibility. This isn’t a new phenomenon in fashion; designers, producers, garment factories, practically all vested parties, tend to dump the blame for their ethical failures on others. Whether it’s the pollution of bodies of water with chemical dyes, below-subsistence wages, unsafe working conditions, or in this case, socially unacceptable products and messaging, the idea of taking responsibility and accountability gets tossed around until one of the involved parties gets pressured, or fined or sanctioned, to act.

In this case, the public’s extreme reactions caused the brand to issue yet another statement of apology, reversing their decision to sue, pledging instead to revisit their organizational structures, workflow, and to work with child protection agencies in the future. Sensing irreversible damage were the controversy to continue, the apology noted that “the responsibility lies with Balenciaga alone.” Even if that were the case, there are hundreds of people who are part of the company’s structure; who, specifically, should take responsibility? It’s illogical to claim that only Balenciaga is responsible; with so many people who could’ve presumably inferred something was amiss—fashion designers, set designers, photographers, stylists, make-up artists, executive administration, and even the parents of the children in the ads—who, specifically, should take responsibility for the malfeasance?

Demna, the company’s Creative Director, issued a statement, but only after he started to get “canceled.” One of the industry’s biggest media outlets, Business of Fashion, was set to award him with their annual Global Voices Award for his advocacy on LGBTQIA+ issues and the War in Ukraine, but rescinded it days before the awards ceremonies. This was done as the hashtags #cancelDemna and #cancelBalenciaga gained traction worldwide. As recent canceling movements (Kanye “Ye” West’s anti-Semitism, JK Rowling’s transphobia) have suggested, any individual can bear the risk (#cancelDemna?), but what about the company as a corporate entity (#cancelBalenciaga)? Those currently at the company should be held accountable, but to cancel the entire business would put thousands of people out of work worldwide, and undo the history and legacy of the founder, Cristobal Balenciaga (1895-1972), who’s in no way associated with this debacle. Can canceling serve justice in a situation like this, and if so, who and what should be canceled, and how?

It's likely Balenciaga will continue to face backlash for its campaigns, until they’ve proven that they’re taking concrete steps to remedy their actions—or until the next fashion scandal quietly blows this one away. As it plays out, however, more and more questions will arise, making this case study richer and more fruitful day by day.

—Doris Domoszlai-Lantner is an historian and archivist of fashion and dress. Read more about her work at www.dorisddl.com and follow her on Instagram and Twitter @doris_ddl.