America is a Melting Pot, Not a Dumping Ground 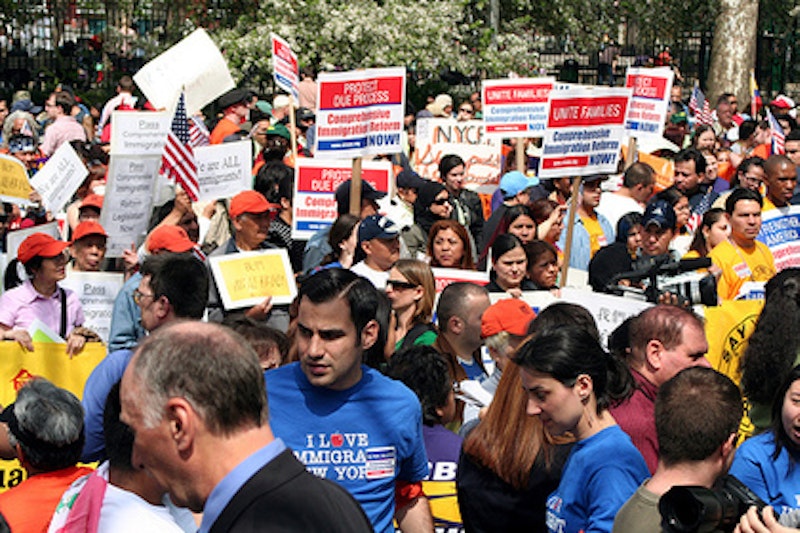 The first issue in the Missouri ballot for Nov. 4 asks this: “Shall the Missouri Constitution be amended to add a statement that English shall be the language of all governmental meetings at which any public business is discussed, decided, or public policy is formulated whether conducted in person or by communication equipment including conference calls, video conferences, or Internet chat or message board?”

The proponents of the measure say a common language in the state has a vital part in integrating it to the American culture. Opponents say it is an unnecessary issue that picks on immigrants for a problem that doesn't exist and it is just a ploy to increase the Republican turnout at the polls. Nonetheless, the main issue here is not just about using English in state business. It is about the aspect of assimilation among immigrants.

This is one of the most contentious issues when it comes to immigration. Yet, just the fact that we have a dispute about it is a disgrace for the state of political discourse in the country. Let me be clear, I do consider America as a nation of immigrants and I too came to the United States from India as one a few years ago. However, the knee-jerk reaction against assimilation is a counter-productive argument, whether it is for the country or for the immigrants themselves.

While arguing against assimilation, the liberals conveniently forget the fact that America has always been a nation of immigrants. They mistake the push for assimilation as a nativist reaction against immigration. This is not the first influx of immigrants to come into the country. There have been waves of immigrants from Germany, Italy, Ireland, Poland and countless other countries. There has never been a demand for them to be able to do daily business in their own native languages, let alone in the dealings with the government. It was understood that once you are in America, you are expected to learn English to be able to be a part of the country. Nobody asked for sign boards in German or license tests in Italian. It must have been tough, but it was a hardship that the immigrants were willing to take on their quest to pursue the American dream.

There are two dangers when you do not require the immigrants to learn English or worse, if you make it easy for them not to learn it. First, failing to learn English denies them the opportunity to pursue their dreams by not being able to work or do business in the mainstream. This vastly diminishes their chances of moving up the financial ladder. Second, it will lead to the rise of a segregation system where the immigrants live a separate life unconnected to the mainstream America. This amounts to the same kind of separatism that the liberals have always fought against. Read in this context, their push for Spanish language schools for the children of immigrants is a dire one. This effectively calls for keeping even the second generation of the immigrants chained to the same barriers that their parents faced, for a foreseeable future.

Take a look at history: Something that most immigrants always had in common was the language hurdle. The first generation immigrants had to always face some level of a challenge crossing the language or the accent barrier. Nonetheless, fast-forward two or three generations and you can see that the children and grandchildren of all these immigrant groups have all become a part of mainstream America. On the other hand these Spanish language programs would in fact create a second string group of citizens who are perpetually stuck in their virtual isolation to the rest of the society.

This does not mean that America should take away the heritage of the immigrants. Immigrants and their children would still keep certain aspects of their culture that, in turn, will part of the American culture. Whether it is the St. Patrick’s Day parades across the country or pizza, these traditions always enrich the American society and this is exactly what makes America the melting pot of the world. However, a melting pot requires that its ingredients be melted indistinguishably into the greater mixture, not stay afloat or sink to the bottom and stay separate like oil and water.

Coming back to the Missouri ballot issue, one can claim that the issue is pointless as the state business or meetings are always held in English and this issue is nothing but an election tactic. However, as a word of caution, states may have to revert to multiple languages when it comes to communication on certain subjects like health and safety where it cannot afford to miss anyone, especially the immigrants who are usually the most at risk.

So, when it comes to immigration policy, the aim should be to promote assimilation rather than creating aeonian dumping grounds for groups of second-class citizens separated by a language barrier. This is not picking on immigrants. This is not racism. This is the way things have been done and it has been proven successful over the centuries. When you come to America, learning English is a small sacrifice that you can make on your journey to achieve your American dream. This is what I did as an immigrant myself a few years ago. It worked just fine for me.