The faithful aren’t put off by ongoing developments. 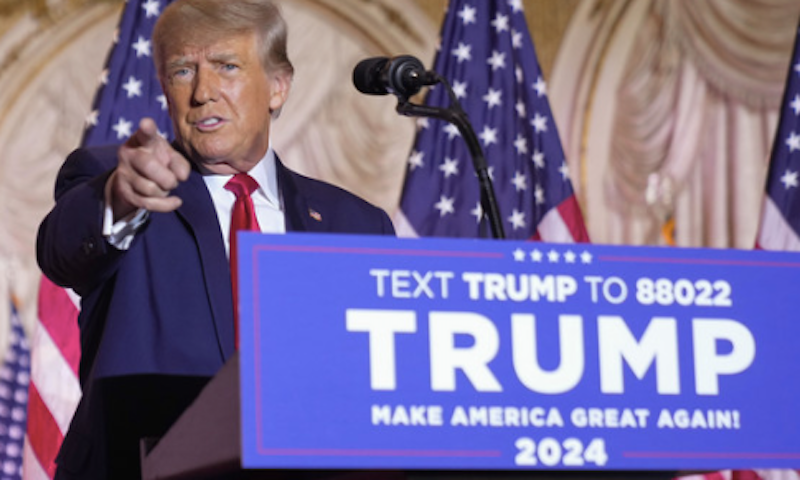 The political landscape was inundated with analysis proclaiming that Donald Trump’s 2024 announcement fizzled. Predictably, response from the leftist media to the Mar-a-Lago declaration harkened back to predictions around Trump’s June 2015 escalator descent: a long-shot. The difference is that in 2015 CNN and MSNBC were drooling over the potential for high ratings and the pleasurable anticipation of chronicling Trump’s cultural crucifixion. At the precipice of Campaign 2024, the Democrat state media is hell-bent on stopping Trump by any means necessary. They know that despite everything, he could still win.

An item high on the Trump Supporters’ Christmas list would be the defeat of Raphael Warnock by Herschel Walker in the Georgia runoff. It won’t mean Senate control, only a return to the pre-midterm 50-50 status quo, wherein vacuous, do-nothing VP Harris could cast the deciding vote in any tie. But a Walker win in Georgia coupled with Republican control of the House would signal the reality of widespread national opposition to the Biden Administration’s destructive agenda, and bolster the prospects for a second Trump presidency.

Another stocking-stuffer is that Ron DeSantis will stand down in 2024. The last thing Trump or anybody else on the right needs is internecine strife; the Florida governor is a star who might cause a fatal schism. The inroads made by a socialistic left into the highest levels of government require that every possible adherent of conservative victory get behind the eventual nominee. With DeSantis hanging fire until 2028, it’s impossible to imagine any other Republican having a chance against Trump. Former VP Mike Pence is a solid conservative, but his seemingly disloyal post-2020 drawback from Trump, and intractable ties to a Republican establishment that Trump supporters abhor, lends a quisling aura to his persona. For the millions upon millions who stand with the Trump-inspired America First vision, realization that Pence (or any other GOP candidate) is the preferred candidate of politicians like Senate Minority Leader Mitch McConnell or Liz Cheney will be the kiss of death.

Another gift for the Trump troops between now and Christmas 2023 would be for the former president to carefully watch who he admits into the inner circle of his campaign. One of the weaknesses of his administration was the distasteful presence of people like Celebrity Apprentice harridan Omarosa Manigault Newman, Stormy Daniels pay-off guy Michael Cohen, and backstabber Anthony Scaramucci. Pals like these served some function in Trump’s previous life; they shouldn’t be allowed anywhere near the 2024 run.

A final gift many in the Trump camp would like to see is more of the kind of demeanor and comportment Trump displayed in his recent declaration for 2024. Former Trump campaign manager Corey Lewandowsky famously said, “Let Trump be Trump,” in reference to the businessman’s abrasive and often crude style. It worked magnificently in 2016, was wholly necessary to clear a Republican field led by duds like Jeb Bush, and send the corrupt Clinton apparatus into the wings.

This time, the former president has a record of achievements to run on: energy independence, the most secure Southern border in decades, the liquidation of Isis, and no-nonsense sanctions against U.S. companies who moved to foreign countries for lower labor costs and then turned to the American market to make a profit.

The degree to which the leftist Democrats, the Deep State swamp, the biased media and loathsome entertainment elites are trying to squelch Trump’s ’24 run from inception are proof that MAGA is alive and well. Trump can win.