Your chances of being murdered here are actually quite slim. 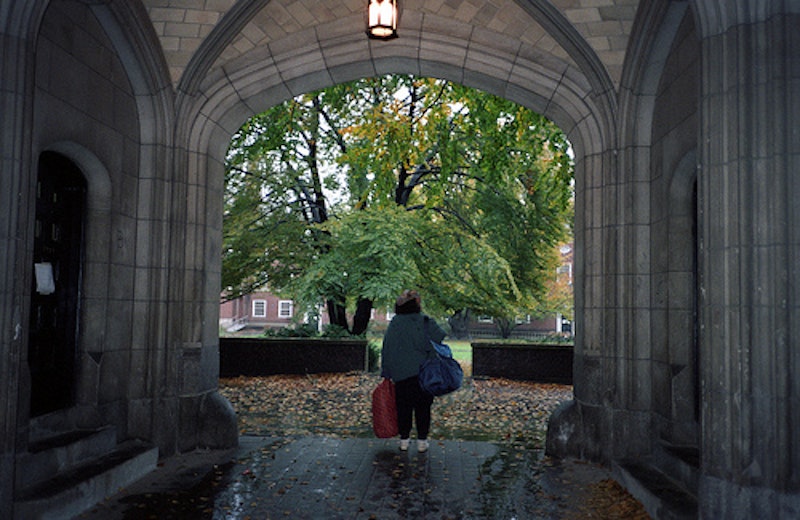 Three p.m. The sun is out and I easily glide down Chapel St. Students. Professors. Harold Bloom. The flower lady. Some dude playing the saxophone. I'm totally oblivious to all this because I'm plugged into my iPhone and listening to a band so hip I can't even tell you what they're called.

I continue my runway strut down the sidewalk—a walk I have perfected over the years—and on the way I pass Atticus and Starbucks and News Haven and a gentleman's store before I reach Sherman's Alley when out of nowhere I feel this giant black dude running up behind me and I think, "What the fuck?"

Bitch, I'm from the city! You don't got no business running up after me. So: I stop dead in my tracks. Then, eyebrow raised, hand-on-hip, "What chu want?" I ask with the sass and tone of a queen about to take her weave and nails out to beat your ass.

The giant black dude abruptly raises his hands in the air—I'm not guilty!—and slowly backs away from me. Relieved I quickly duck into my apartment. This is the closest I've ever been to being mugged, ever, and it was in New Haven. On campus. In broad daylight.

With the recent tragedy of Annie Le, there is now all this rekindled brouhaha about how "safe" Yale really is. As if New Haven didn't already have a bad reputation! Will the tragedy cause parents to send their children to that bankrupt trade school "outside of Boston" instead?

Anyone who went to Yale in the 1980s, 90s and even early in this decade will tell you that it was "a shit pit." Regular gunfire. Muggings. Pistol whippings. Nobody outside at night. Vacant downtown. New Haven, once a vibrant commercial center like most cities in the Northeast, collapsed after the 1960s, resulting in a crime-ridden center punctuated by a prestigious and rich university.

Sometimes it's hard to tell the difference between What's Yale and What's Not, especially now that the University owns nearly everything around it. Many Yale students don't even venture into New Haven because of "safety" issues, too many poors.

I'll tell you what: New Haven is plenty safe—as safe as any city, and it is definitely a city. Despite my almost-mugging, I have never been robbed/raped/etc. in New Haven, and it's actually a cool place to be for a couple years. The New York Times, stocked with Yale alums as it is, has recently written several pieces about New Haven's renaissance. Plus, we have American Apparel now, which is the ultimate sign of gentrification.

The real reason peeps think New Haven is unsafe is because there are TOO MANY BLACK PEOPLE! I have already written about how the chief of Yale police used to indicate the race of criminal varmints in his regular security emails. Armed with such stereotypes, rich white/Asian folks from leafy suburbs come to Yale and brush up against the, like, poors, clinch their asses, purses, wallets.

Last year I lived in this completely fierced-out Yale-owned apartment building on Chapel St. Exposed brick walls, 11-foot ceilings, open loft space. Fabulous. Secure—the only way into the building was with a proxy card. So one night I'm coming home from a long, hard day at the coffee shop and I'm at the steps to the building trying to catch the door because this other girl just went inside. She sees me—ugh oh, a black!—and then grabs hold of the door, preventing me from coming in. Then: "Do You Live Here?" OH NO SHE JUST DIDN'T!!

I-I-I'm so red hot it takes all my might not to cuss the ho out. It doesn't work.

"What the fuck do you mean ‘Do I live here?' I roar. She repeats it. I'm so mad that I smack my lips, just yank the door open, move her aside, walk up the stairs to my apartment.

Anyway, all I'm saying is that New Haven is safe; you just have to be street smart. And sometimes, no matter how safe you are, bad shit just happens. I realize that even as this white lady accused me of not living in the fancy, high-end building, I also suspected that the black dude running up to me that day on Chapel St. was going to mug me. But is that about race, or is it about the fact that there's somebody running up to you? What's the difference between street smarts and racial profiling?

That's why I had a sigh of relief when I heard that the accused murderer in the Annie Le case is a white dude. See, black people aren't so bad! I'm telling you, white people do some crazy shit.