The Unimportance of Gym Class

Still the most worthless of high school requirements. 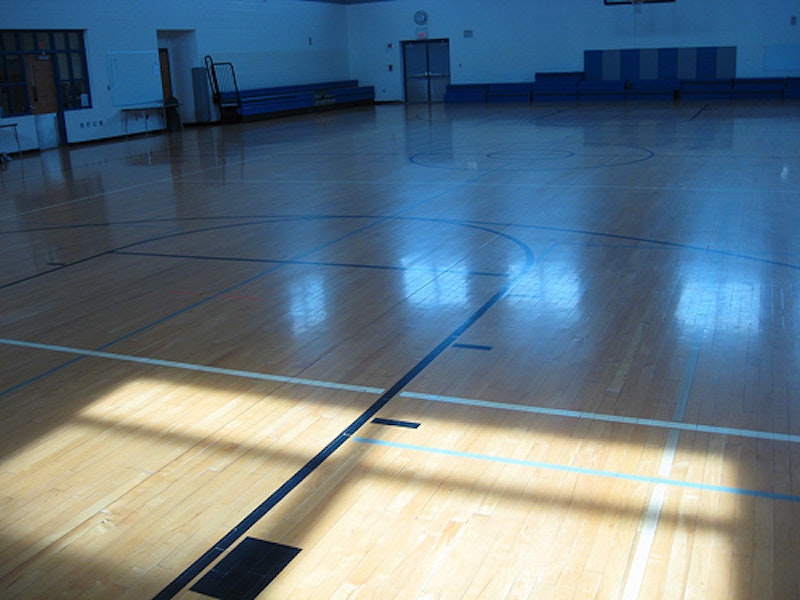 Last December I wrote an article about the current fretting over the "stress" that teenagers must endure in their tender years. It wasn't met with much approval from younger readers, including my own kids, which continues to puzzle me, since compared to finding and keeping a job, supporting a family and managing finances without dipping into the parental cookie jar, the rigors of physics homework and peer pressure wouldn't appear, at least to an adult, to rate high on the anxiety meter. It's all a matter of perspective, of course, and while not intentionally minimizing the real agony of a distinct minority of high schoolers, it's my belief that in a matter of years most of these supposedly afflicted young men and women will look back and have at least a half-hearted chuckle at their self-absorption.

Here's an olive branch, however: physical education-p.e., or gym for short-really did suck. I was reminded of this at the beginning of the school year when my older son, a junior at a prestigious private school in Baltimore, told me that he was once again creatively fulfilling the phys. ed. requirement by filming the home and away girls' soccer team. He has zero interest in participating in athletics, but as a filmmaker and an adolescent with an eye for the ankle, to use an ancient and family-friendly expression, this all makes perfect sense and so a nod to you, Nicky Otis.

My own experience was far darker, at least during the final year of high school in 1972-73. Our family had moved from Long Island to Lawrence, New Jersey in June of '72, after my father had purchased a car wash there a year earlier-the economy at that time was lousy, and it took forever to sell our pre-fab house on LaRue Dr. in Huntington, so Dad had commuted back home on weekends, while maintaining a dumpy apartment in Trenton during the week. As it happened, my father, just weeks after we were under the same roof on Pine Knoll Dr., was felled by a fatal heart attack at 55, and so it wasn't the best of times. Two of my brothers were recruited to run the business, one of whom was called back from a very happy stint in pre-Russian invasion Afghanistan, and the other a recent graduate from the University of New Hampshire. This monkey wrench wasn't in their career plans, but under the circumstances they took over with no complaints. My two oldest brothers, thriving in their own business careers and married with young children, were charged with selling the albatross, which took about eight months.

Anyway, amidst this understandable turmoil (my mom was in a delicate daze, and we tip-toed around her), I began my last year of high school at a public institution that was far different from the liberal Huntington High School; it was a cauldron of rednecks, some of whom I got a hoot out of, like my McGovern-hating history teacher who really believed that kids who smoked pot were not only destined to wind up with a spike in their arms, but also guaranteed a spot in hell. Actually, Marty was a pretty decent fellow and I enjoyed debating with him about the ongoing Watergate scandal, which was a welcome and entertaining diversion at the time.

On the other hand, the gym teacher, allegedly a former Marine who shot "slants in ‘Nam," a claim I found highly suspicious, was a world-class asshole who did his best every day to pick on those students who didn't excel at rope-climbing, double-somersaults, wrestling and basketball; incredibly, at least to me, gym was a daily class at this backward school, a rude shock to a hippie who'd been fortunate enough to take archery and badminton and other minor sports, with no uniform required, twice a week in Huntington. Although a decent baseball player, I had no desire to even attempt any of these activities and, as I was one of the few longhairs, this creep did his best to intimidate and single me out for ridicule, a sadistic pleasure on his part, and one that the sheep in the class were only too happy to exacerbate.

Truth be told, this didn't really faze me, but putting up with the inane banter in the locker room each morning was a drag, where the star athletes would preen, brag about the latest chick they'd banged, show off ridiculously large hickeys, and try to make life miserable for those who didn't hang onto every word of their boastful chatter. I did have one friend in gym, a swell fellow named Marshall who later went to Haverford College and although I can't say for certain, is probably quite successful, but as a Lawrence lifer he was indoctrinated into the poisonous culture and so went along, grudgingly, with the nonsense.

One guy, who was pretty smart and should've known better, decided he'd be my tormentor-luck of the draw, I guess-and every day he'd try to get my goat about my inability to complete 50 chin-ups or some other awful endeavor, simply assuming I'd be easy prey and he'd make points with the other jocks. This was completely beyond my comprehension, and after early in the fall semester I attempted to engage in substantive conversation, which was an utter failure, as when I talked about the latest Lou Reed or David Bowie release was called-the ultimate insult-a "queer" for my effort to be congenial, I just ignored the guy, much to his chagrin. When April of '73 rolled around, mercifully, and I received acceptance at Johns Hopkins University, all of a sudden this guy's tune changed-he undoubtedly had dismissed me as burnt-out druggie-and suddenly wanted to be buddies. I really had no time for this sort of behavior, told the guy to fuck off and cruised through the rest of the year.

I was a member of the National Honor Society that senior year-hardly a noteworthy achievement given the lax academic standards-and the club met once every other week. On one occasion, as graduation neared, the "elite" students debated on how ostentatious their self-toasting on the big day should be. I had no intention of even attending the ceremony, but just for grins, when a brown-noser suggested that all Honor Society kids ought to have gold tassels affixed to their caps, I protested, arguing that there was no need to show up, in front of parents, those who either hadn't successfully grubbed for good grades or were just not particularly good students. One girl, a slutty cheerleader whose popularity was at the top of charts, took umbrage with my reasonable suggestion, saying it was tradition, after all, to single out those who played by the rigged rules, and then for good measure asked if I celebrated Thanksgiving. That was too weird to even consider and I just cracked up, joined by Marshall and the excellent English teacher who drew the short straw and had to oversee this obnoxious group.

But hey, I still think high school was pretty awesome, for despite the travails of the backward Lawrence High School and that fake Marine, I was fortunate enough to be excused from both my English classes by two young women who, to their credit, allowed me to spend the time instead in the library, reading whatever I wanted and all that was asked in return was that I write a single term paper and, at their convenience, gab about Thomas Wolfe, Dylan Thomas, Joan Didion and John Barth. On weekends, I'd often drive the half hour or so to New Hope, PA, a hippie colony at the time, and spend time with one of these teachers, whose name escapes me now, and we'd have a grand time.

Undoubtedly, I'm still crummy at chin-ups and rope climbing, but I'm fairly certain this hasn't impacted my life in any conceivable way.