It’s hard enough being an educator without getting punished for doing your job. 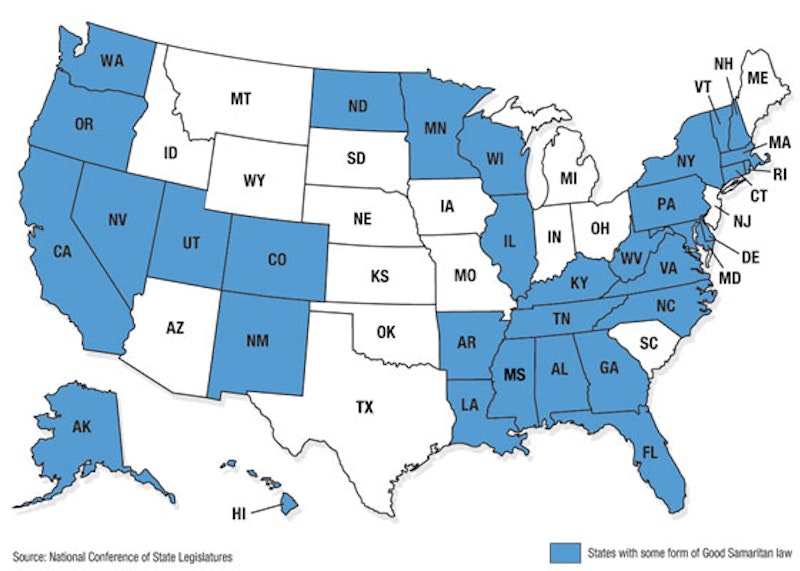 (Mr. Smooth teaches at a Maryland middle school and would like to remain anonymous.)

I am Peng Yu, the Chinese man who carried an elderly woman to the hospital after she’d fallen from a bus and broken her femur, the man who was subsequently sued by that same woman for causing her fall, despite eyewitness testimony claiming otherwise. The Nanjing District Court decided, "No one would in good conscience help someone unless they felt guilty."

Since 1959, U.S. courts have protected the heroes who embody Luke 10:29-37 under the Good Samaritan law, which provides that “No person who in good faith renders emergency care at the scene of the emergency, shall be liable for any civil damages as a result of any acts or omissions by such person in rendering the emergency care." This provision has been mauled, however, by litigious victims-turned-predators who seek to profit from their misfortune, even at the expense of the good faith people who offered help in an emergency situation. Take, for example, Alexandra Van Horn, who blamed her spinal paralysis on the woman who pulled her from her wrecked car following a 45 mph crash into a light pole; the court awarded Ms. Van Horn Pain and Suffering compensation at the defendant’s expense.

I suppose this shouldn’t be surprising in a country that has historically undervalued the civic contributions of educators, whose own union rejects applications over simple misunderstandings. Maybe I should be grateful that the American Federation of Teachers (AFT) blacklisted me after my students and I mistakenly picketed their D.C. headquarters on the 25th anniversary of Waco—after all, had I been a member of the AFT, they probably would’ve parked me in one of those rubber rooms with the greasers and pedophiles. Instead, I get suspended without pay.

No group is more vulnerable to this abuse of our justice system than educators, an already underpaid demographic that now must anxiously tiptoe through their own classrooms to avoid teacher liability claims. The rules are backwards. If a child gets injured on the field, a teacher must wait for a medical professional to administer aid, even in the case of grave bodily harm where time is sensitive. Teachers aren’t even allowed to break up fights anymore lest they get sued for physically deescalating tensions, yet, paradoxically, filming those fights and monetizing the footage on YouTube is perfectly alright in the eyes of the National Education Association (before people Google me and find out, I admit I have done this once).

Our job is to take care of these kids, except we’re not supposed to use our judgment when to act? During the opioid epidemic, a period where over half a million Americans have died from overdoses, are teachers expected to use caution when they suspect drug abuse? Percocet is one thing, but heroin? The law is clear on this issue, and I, as a good faith actor, should be exempt from scrutiny. I shouldn’t be suspended for trying to get five middle schoolers off drugs.

If five sixth-grade girls told you they were on horse, what would you do? Maybe that’s not exactly what they said, but that’s what I heard. They were all members of the equestrian team, which I assumed was a stock trading club because of the name and the fact they were dressed like the Monopoly man without the monocle. It made sense in a tragic way, considering their age—high finance, high stress. And here’s where the story needs clearing up: I did not “kidnap” them—I dropped them off at a Methadone clinic, with the intention of picking them up in a couple hours; I had class, after all.

But I forgot to confiscate their cellphones, so I realized my mistake pretty quickly when their parents started calling me, and I immediately turned around, except most of their parents had already arrived by the time I got back and they spent about 30 minutes yelling at me. Then the headmaster yelled at me when I returned to school. And now there might be lawsuits.

Believe me, I’ve learned my lesson: next time, if there is a next time, I’ll let the kids shoot up in class. The Good Samaritan law doesn’t apply to teachers.