That’s Why I Chose Yale 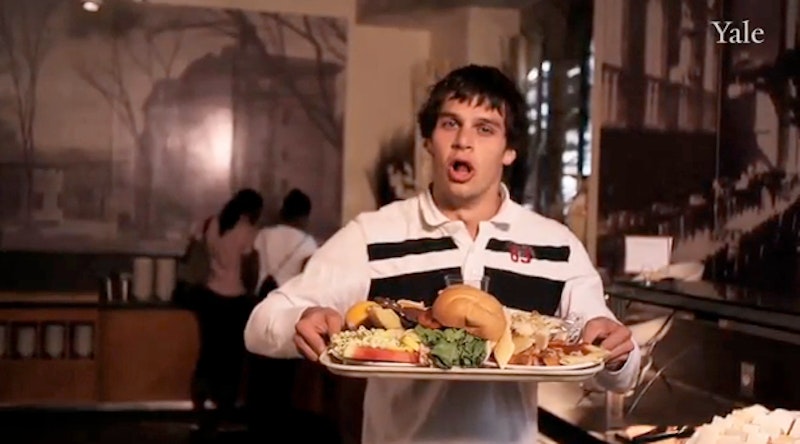 Don’t you wish your never-before heard-of alma mater made a musical when you were applying to college?

The new Yale admissions video is 16 minutes long and starts with a traditional, non-singing info session. A gayish tour guide fields questions from the audience about the university. At the end of the session, the audience turns around turns around as a girl in the back asks “Why did you chose Yale?” Audience turns back to pseudo gay admissions dude, who gives a longing look. And BAM! The musical bust out begins. “That’s why I chose Yale.”

Instead of a traditional view book—does anybody really read anymore?—the video stars current undergraduates and recent alums singing and bouncing around campus landmarks, all of them shouting about the things that make Yale fabulous: the Master’s Tea’s with celebrities, such as red-hot hottie James Franco (though he does not make the video!), organic food in the dining halls, the Saybrook College Courtyard, the Berkeley College Dance Studio and Gym, the internships, the 2000 classes, and on and on!

The video is ultra cheesy, but that’s probably because musicals are cheesy. If you can look that, you’ll see that the video is kind of brilliant—a timely and infectious publicity move, something that advertises itself. (The video premiered officially earlier this week, and has 190,000 hits on YouTube).

Sure, there are plenty of online tours of campuses around the country. But none of them are official, university-sponsored musicals! I remember when I applied to college, my mailbox was always filled with thick view books and even CDs with virtual tours on them. Videos weren’t that popular, and you really did have to visit to get a feel for the campus and the student body.

The irony is that the Yale admissions musical comes right on the heels of Fox’s now Golden Globe-winning television show Glee, which is all about singing and high school and stuff. Here’s the thing: By making a musical, Yale is not only trying to reach an audience who is growing up in the age of YouTube. The University is embracing pop culture, which everybody loves, showing that it’s not stodgy, old, conservative and boring. Harvard is old and boring. But Yale is a Fun! Exciting! The place to be. Even though Harvard and Princeton both have a rise in applications for the next fall class, Yale is saying, suck it, H and P! We are so joyful that we don’t care about your numbers!

Maybe you have already heard the stereotype that Yale is the “Gay Ivy.” It is not a stereotype. College is one of the only places where you can get your gay on before you enter the real world and become an All Powerful politician, with 2.5 kids and a conservative Republican. Even Patrick Bateman, in American Psycho refers to “that Yale thing”—secret gay dudes and lesbians!
But beyond experimentation, Yale’s gayness was solidified when it birthed the first Lesbian and Gay Studies major. Plus, straight women complain all the time about how difficult it is to find a dude because they’re either all taken or gay by May. I have had friends who’ve experimented with their athlete roommates. Work it out!

But to be honest, I did see a lot of gay dudes when I came to campus for a visit. Not just gay as in, Oh Hi I’m Gay. I mean like extremely flamboyant, and very comfortable with it. I don’t consider myself to be “that” gay, whatever that means, but I did think that I would fit in as I marched to class wearing voluminous black pearl necklaces. I have often thought about why there were so many outwardly gay dudes and lesbians at Yale, and I think there’s something about rich, confident, smart people from fabulous backgrounds who are very okay being their very gay selves.

So all this makes me think back to why I chose Yale. When I visited the campus, there weren’t any admissions musicals or pseudo-gay dudes bouncing off the walls or anything. That would have been a plus. But I did feel that everyone I met was happy and grateful to be there. People may not realize it, but colleges have personalities that are reflected in the view books. Everybody already thinks people from Harvard are overly pretentious, that people from Princeton are just as pretentious, with their tweed and eating clubs and all. But in the fight for tuition dollars—and it’s really a fight for personality and uniqueness when, really, HYP are all the same—the Yale admissions musical perfectly summarizes the attitude of the University. Yale is gay, happy and fun.

They forgot one thing, though: Yale has more celebrity kids!